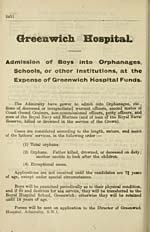 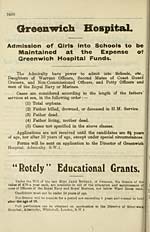 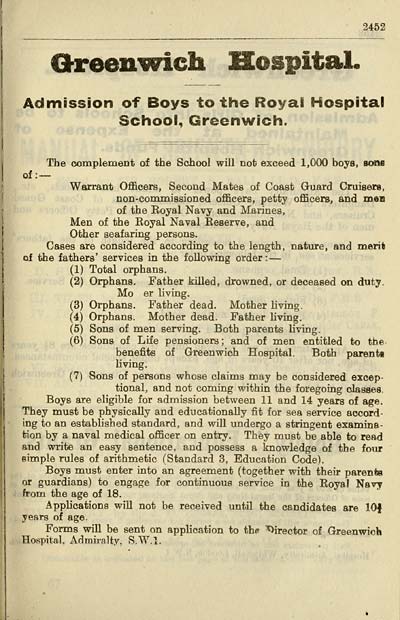 2452
Greenwich Hospital.
Admission of Boys to the Royal Hospital
School, Greenwich.
The complement of the School will not exceed 1,000 boys, some
of: —
Warrant Officers, Second Mates of Coast Guard Cruisers,
non-commissioned officers, petty officers, and me»
of the Royal Navy and Marines,
Men of the Royal Naval Reserve, and
Other seafaring persons.
Cases are considered according to the length, nature, and merit
of the fathers' services in the following order: —
(1) Total orphans.
(2) Orphans. Father killed, drowned, or deceased on duty.
Mo er living.
(3) Orphans. Father dead. Mother living.
(4) Orphans. Mother dead. Father living.
(5) Sons of men serving. Both parents living.
(6) Sons of Life pensioners; and of men entitled to the
benefits of Greenwich Hospital. Both parenti
living.
(7) Sons of persons whose claims may be considered excep-
tional, and not coming within the foregoing classes.
Boys are eligible for admission between 11 and 14 years of age.
They must be physically and educationally fit for sea service accord-
ing to an established standard, and will undergo a stringent examina-
tion by a naval medical officer on entry. They must be able to read
and write an easy sentence, and possess a knowledge of the four
simple rules of arithmetic (Standard 3, Education Code).
Boys must enter into an agreement (together with their parents
or guardians) to engage for continuous service in the Royal Navy
from the age of 18.
Applications will not be received until the candidates are lOf
years of age.
Forms will be sent on application to th<* director of Greenwich
Hospital, Admiralty, S.W.I.