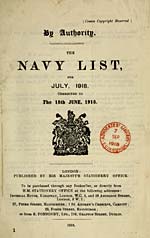 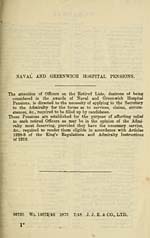 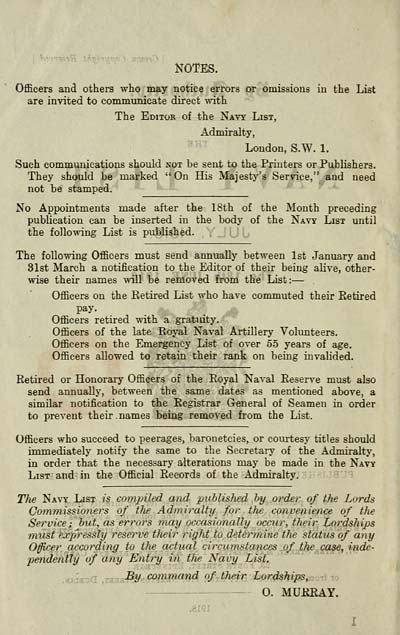 NOTES.
Officers and others who may notice errors or omissions in the List
are invited to communicate direct with
The Editor of the Navy List,
Admiralty,
London, S.W. 1.
Such communications should not be sent to the Printers or Publishers.
They should be marked "On His Majesty's Service," and need
not be stamped.
No Appointments made after the 18th of the Month preceding
publication can be inserted in the body of the Navy List until
the following List is published. ,Y_
The following Officers must send annually between 1st January and
31st March a notification to the Editor of their being alive, other-
wise their names will be removed from the List: —
Officers on the Retired List who have commuted their Retired
pay. m ^^ JK j*
Officers retired with a gratmty.
Officers of the late Royal Naval Artillery Volunteers.
Officers on the Emergency List of over 55 years of age.
Officers allowed to retain their rank on being invalided.
Retired or Honorary Officers of the Royal Naval Reserve must also
send annually, between the same dates as mentioned above, a
similar notification to the Registrar General of Seamen in order
to prevent their . names being removed from the List.
Officers who succeed to peerages, baronetcies, or courtesy titles should
immediately notify the same to the Secretary of the Admiralty,
in order that the necessary alterations may be made in the Navy
List and in the Official Records of the Admiralty.
The Navy List is compiled and published by order of the Lords
Commissioners of the Admiralty for the convenience of the
Service ; but. as errors may occasionally occur, their Lordships
must expressly reserve their right to deter mine the status of any
Officer according to the actual circumstances of the case, inde-
pendently of any Entry in the Xavy List.
By command of their Lordships,
0. MURRAY.