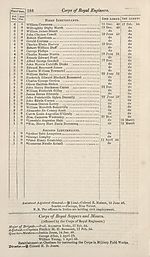 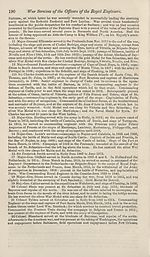 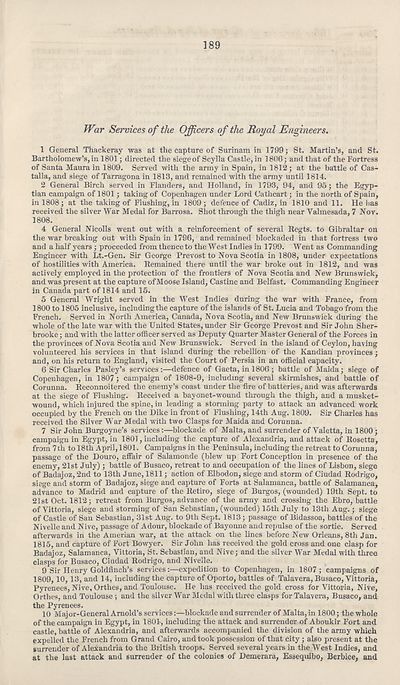 189
JVar Services of the Officers of the Royal Engineers.
1 General Thackeray was at the capture of Surinam in 1799; St. Martin’s, and St.
Bartholomew’s, in 1801; directed the siegeof Scylla Castle, in 1806; and that of the Fortress
of Santa Maura in 1809. Served with the army in Spain, in 1812; at the battle of Cas-
talla, and siege of Tarragona in 1813, and remained with the army until 1814.
2 General Birch served in Flanders, and Holland, in 1793, 94, and 95; the Egyp¬
tian campaign of 1801 ; taking of Copenhagen under Lord Cathcart; in the north of Spain,
in 1808; at the taking of Flushing, in 1809 ; defence of Cadiz, in 1810 and 11. He has
received the silver War Medal for Barrosa. Shot through the thigh near Valmesada, 7 Nov.
1808.
4 General Nicolls went out with a reinforcement of several Regts. to Gibraltar on
the war breaking out with Spain in 1796, and remained blockaded in that fortress two
and a half years; proceeded from thence to the West Indies in 1799. Went as Commanding
Engineer with Lt.-Gen. Sir George Prevost to Nova Scotia in 1808, under expectations
of hostilities with America. Remained there until the war broke out in 1812, and was
actively employed in the protection of the frontiers of Nova Scotia and New Brunswick,
and was present at the capture of Moose Island, Castine and Belfast. Commanding Engineer
in Canada part of 1814 and 15.
5 General Wright served in the West Indies during the war with France, from
1800 to 1805 inclusive, including the capture of the islands of St. Lucia and Tobago from the
French. Served in North America, Canada, Nova Scotia, and New Brunswick during the
whole of the late war with the United States, under Sir George Prevost and Sir John Sher¬
brooke ; and with the latter officer served as Deputy Quarter Master General of the Forces in
the provinces of Nova Scotia and New Brunswick. Served in the island of Ceylon, having
volunteered his services in that island during the rebellion of the Kandian provinces;
and, on his return to England, visited the Court of Persia in an official capacity.
6 Sir Charles Pasley’s services:—defence of Gaeta, in 1806; battle of Maida; siege of
Copenhagen, in 1807; campaign of 1808-9, including several skirmishes, and battle of
Corunna. Reconnoitered the enemy’s coast under the fire of batteries, and was afterwards
at the siege of Flushing. Received a bayonet-wound through the thigh, and a musket-
wound, which injured the spine, in leading a storming party to attack an advanced work
occupied by the French on the Dike in front of Flushing, 14th Aug. 1809. Sir Charles has
received the Silver War Medal with two Clasps for Maida and Corunna.
7 Sir John Burgoyne’s services:—blockade of Malta, and surrender of Valetta, in 1800;
campaign in Egypt, in 1801, including the capture of Alexandria, and attack of Rosetta,
from 7 th to 18th April, 1801. Campaigns in the Peninsula, including the retreat to Corunna,
passage of the Douro, affair of Salamonde (blew up Fort Conception in presence of the
enemy, 21st July) ; battle of Busaco, retreat to and occupation of the lines of Lisbon, siege
of Badajoz, 2nd to 13th June, 1811; action of Elbodon, siege and storm of Ciudad Rodrigo,
siege and storm of Badajoz, siege and capture of Forts at Salamanca, battle of Salamanca,
advance to Madrid and capture of the Retiro, siege of Burgos, (wounded) 19th Sept, to
21st Oct. 1812; retreat from Burgos, advance of the army and crossing the Ebro, battle
of Yittoria, siege and storming of San Sebastian, (wounded) 15th July to 13th Aug.; siege
of Castle of San Sebastian, 3Lst Aug. to 9th Sept. 1813; passage of Bidassoa, battles of the
Nivelle and Nive, passage of Adour, blockade of Bayonne and repulse of the sortie. Served
afterwards in the Amerian war, at the attack on the lines before New Orleans, 8th Jan.
1815, and capture of Fort Bowyer. Sir John has received the gold cross and one clasp for
Badajoz, Salamanca, Vittoria, St. Sebastian, and Nive; and the silver War Medal with three
clasps for Busaco, Ciudad Rodrigo, and Nivelle.
9 Sir Henry Goldfinch’s services:—expedition to Copenhagen, in 1807; campaigns of
1809, 10, 13, and 14, including the capture of Oporto, battles of Talavera, Busaco, Vittoria,
Pyrenees, Nive, Orthes, and Toulouse. He has received the gold cross for Vittoria, Nive,
Orthos, and Toulouse ; and the silver War Medal with three clasps for Talavera, Busaco, and
the Pyrenees.
10 Major-General Arnold’s services:—blockade and surrender of Malta, in 1800; the whole
of the campaign in Egypt, in 1801, including the attack and surrender of Aboukir Fort and
castle, battle of Alexandria, and afterwards accompanied the division of the army which
expelled the French from Grand Cairo, and took possession of that city ; also present at the
surrender of Alexandria to the British troops. Served several years in the West Indies, and
at the last attack and surrender of the colonies of Demerara, Essequibo, Berbice, and