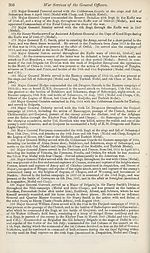 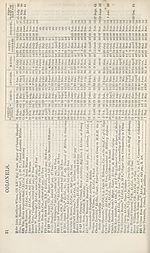 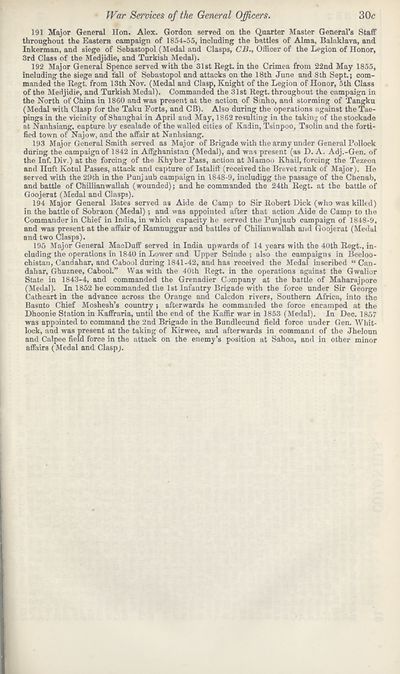 30c
War Services of the General Officers.
191 Major General Hon. Alex. Gordon served on the Quarter Master General’s Staff
throughout the Eastern campaign of 1854-55, including the battles of Alma, Balaklava, and
Inkerman, and siege of Sebastopol (Medal and Clasps, CD.. Officer of the Legion of Honor,
3rd Class of the Medjidie, and Turkish Medal).
192 Major General Spence served with the 31st Regt. in the Crimea from 22nd May 1855,
including the siege and fall of Sebastopol and attacks on the 18th June and 8 th Sept, j com¬
manded the Regt. from 13th Nov. (Medal and Clasp, Knight of the Legion of Honor, 5th Class
of the Medjidie, and Turkish Medal). Commanded the 31st Regt. throughout the campaign in
the North of China in I860 and was present at the action of Sinho, and storming of Tangku
(Medal with Clasp for the Taku Forts, and CB). Also during the operations against the Tae-
pings in the vicinity of Shanghai in April and May, 1862 resulting in the taking of the stockade
at Nanhsiang, capture by escalade of the walled cities of Kadin, Tsinpoo, Tsolin and the forti¬
fied town of Najow, and the affair at Nanhsiang.
193 Major General Smith served as Major of Brigade with the army under General Pollock
during the campaign of 1842 in Affghanistan (Medal), and was present (as D. A. Adj.-Gen. of
the Inf. Div.) at the forcing of the Khyber Pass, action at Mamoo Khail, forcing the Tezeen
and Huft Kotul Passes, attack and capture of Istaliff (received the Brevet rank of Major). Ho
served with the 29th in the Punj iub campaign in 1848-9, includiog the passage of the Chenab,
and battle of Chillianwallah (wounded); and he commanded the 24th Regt. at the battle of
Goojerat (Medal and Clasps).
194 Major General Bates served as Aide de Camp to Sir Robert Dick (who was killed)
in the battle of Sobraon (Medal) ; and was appointed after that action Aide de Camp to the
Commander in Chief in India, in which capacity he served the Punjaub campaign of 1848-9,
and was present at the affair of Ramnuggur and battles of Chilianwallah and Goojerat (Medal
and two Clasps).
195 Major General MacDuff served in India upwards of 14 years with the 40th Regt., in¬
cluding the operations in 1840 in Lower and Upper Scinde ; also the campaigns in Beeloo-
chistan, Candahar, and Cabool during 1841-42, and has received the Medal inscribed “ Can-
dahar, Ghuznee, Cabool.” Was with the 40th Regt. in the operations against the Gwalior
State in 1843-4, and commanded the Grenadier Company at the battle of Maharajpore
(Medal). In 1852 he commanded the 1st Infantry Brigade with the force under Sir George
Cathcart in the advance across the Orange and Caledon rivers, Southern Africa, into the
Basuto Chief Moshesh’s country ; afterwards he commanded the force encamped at the
Dhoonie Station in Kaffraria, until the end of the Kaffir war in 1853 (Medal). In Dec. 1857
was appointed to command the 2nd Brigade in the Bundlecund field force under Gen. Whit¬
lock, and was present at the taking of Kirwee, and afterwards in command of the Jheloun
and Calpee field force in the attack on the enemy’s position at Sahoa, and in other minor
affairs (Medal and Claspj.