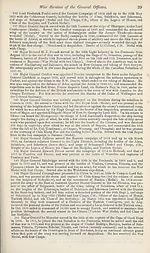 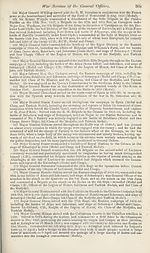 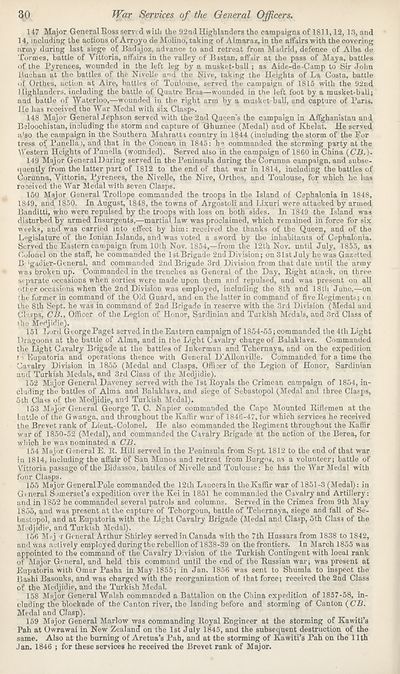 30 War Services of the General Officers.
147 Major General Ross served will) the 92nd Highlanders the campaigns of 1811,12, 13, and
14, including the actions of Arroyo de Molino, taking of Almaraz, in the affairs with the covering
army during last siege of Badajoz, advance to and retreat from Madrid, defence of Alba de
'formes, battle of Vittoria, affairs in the valley of Bastan, affair at the pass of Maya, battles
of the Pyrenees, wounded in the left leg by a musket-ball ; as Aide-de-Camp to Sir John
Buchan at the battles of the Nivelle and the Nive, taking the Heights of La Costa, battle
of Orthes, action at Aire, battles of Toulouse, served the campaign of 1815 with the 92nd
Highlanders, including the battle of Quatre Bras—wounded in the left foot by a musket-ball;
and battle of Waterloo,—wounded in the right arm by a musket ball, and capture of Paris,
lie has received the War Medal with six Clasps.
148 Major General Jephson served with the 2nd Queen's the campaign in Affghanistau and
Bsloochistan, including the storm and capture of Ghuznee (Medal) and of Khelat. He served
a'so the campaign in the Southern Mahratti country in 1844 (including the storm of the For
tress of Punella;, and that in the Concan in 1845: he commanded the storming party at the
Western Heights of Punella (wounded). Served also in the campaign of 1860 in China (CB.).
149 Major General During served in the Peninsula during the Corunna campaign, and subse-
([uently from the latter part of 1812 to the end of that war in 1814, including the battles of
Corunna, Yittoria, Pyrenees, the Nivelle, the Nive, Orthes, and Toulouse, for which he has
received the War Medal with seven Clasps.
150 Major General Trollope commanded the troops in the Island of Cephalonia in 1848,
1849, and 1850. In August, 1848, the towns of Argostoli and I.ixuri were attacked by armed
Banditti, who were repulsed by the troops with loss on both sides. In 1849 the Island was
disturbed by armed Insurgents,—martial law was proclaimed, which remained in force for six
weeks, and was carried into effect by him: received the thanks of the Queen, and of the
Legislature of the Ionian Islands, and was voted a sword b}' the inhabitants of Cepbalonia.
Served the Eastern campaign from 10th Nov. 1854,—from the 12th Nov. until July, 1855, as
Colonel on the staff, he commanded the 1 st Brigade 2nd Division; on 31st July he was Gazetted
B ’gadier-General, and commanded 2nd Brigade 3rd Division from that date until the army
was broken up. Commanded in the trenches as General of the Day, Right attack, on three
separate occasions when sorties were made upon them and repulsed, and was present on all
other occasions when the 2nd Division was employed, including the 8th and 18th June,—on
the former in command of the Old Guard, and on the latter in command of five Regiments; t n
the 8th Sept, he was in command of 2nd Brigade in reserve with the 3rd Division (Medal and
Clasps, CB., Officer of the Legion of Honor, Sardinian and Turkish Medals, and 3rd Class of
ihe Medjidie).
151 Lord George Paget served in the Eastern campaign of 1854-55; commanded the 4th Light
Dragoons at the battle of Alma, and in the Light Cavalry charge of Balaklava. Commanded
the Light Cavalry Brigade at the battles of Inkerman and Tchernaya, and on the expedition
to Eupatoria and operations thence with General DAllonville. Commanded for a time the
Cavalry Division in 1855 (Medal and Clasps, Offirer of the Legion of Honor, Sardinian
and Turkish Medals, and 3rd Class of the Medjidie).
152 Major General Daveney served with the 1st Royals the Crimean campaign of 1854, in¬
cluding the battles of Alma and Balaklava, and siege of Sebastopol (Medal and three Clasps,
5th Class of the Medjidie, and Turkish Medal).
153 Major General George T. C. Napier commanded the Cape Mounted Riflemen at the
battle of the Gwanga, and throughout the Kaffir war of 1846-47, for which services he received
the Brevet rank of Lieut-Colonel. He also commanded the Regiment throughout the Kaffir
war of 1850-52 (Medal), and commanded the Cavalry Brigade at the action of the Berea, for
which he was nominated a CB.
154 Major General E. R. Hill served in the Peninsula from Sept. 1812 to the end of that war
in 1814, including the affair of San Munos and retreat from Burgos, as a volunteer; battle of
Vittoria passage of the Bidassoa, battles of Nivelle and Toulouse: he has the War Medal with
four Clasps.
155 Major General Pole commanded the 12th Lancers in the Kaffir war of 1851-3 (Medal): in
Gmeral Somerset’s expedition over the Kei in 1851 he commanded the Cavalry and Artillery:
and in 1852 he commanded several patrols and columns. Served in the Crimea from 9th May
1855, and was present at the capture of Tchorgoun, battle of Tchernaya, siege and fall of Se¬
bastopol, and at Eupatoria with the Light Cavalry Brigade (Medal and Clasp, 5th Class of the
Medjidie, and Turkish Medal).
156 Msj r General Arthur Shirley served in Canada with the 7th Hussars from 1838 to 1842,
and was actively employed during the rebellion of 1838-39 on the frontiers. In March 1855 was
appointed to the command of the Cavalry Division of the Turkish Contingent with local rank
of Major General, and held this command until the end of the Russian war; was present at
Eupatoria with Omar Pasha in May 1855; in Jan. 1856 was sent to Shumla to inspect the
Bashi Basouks, and was charged with the reorganization of that force; received the 2nd Class
of the Medjidie, and the Turkish Medal.
158 Major General Walsh commanded a Battalion on the China expedition of 1857-58, in¬
cluding the blockade of the Canton river, the landing before and storming of Canton (CB.
Medal and Clasp).
159 Major General Marlow was commanding Royal Engineer at the storming of Kawiti’s
Pah at Ovvrawai in New Zealand on the 1st July 1845, and the subsequent destruction of the
same. Also at the burning of Aretua’s Pah, and at the storming of Kawiti’s Pah on the 11th
Jan. 1846 ; for these services he received the Brevet rank of Major.