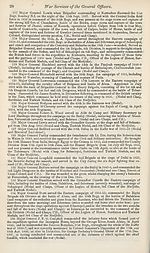 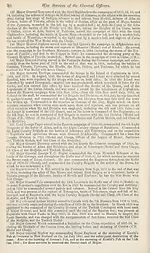 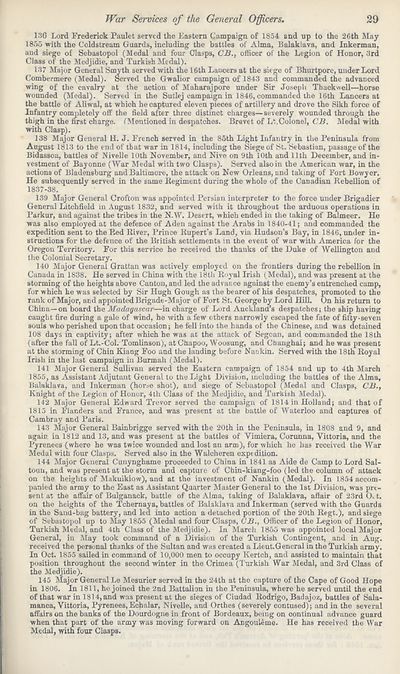 29
JVar Services of the General Officers.
136 Lord Frederick Paulet served the Eastern Campaign of 1854 and up to the 26th May
1855 with the Coldstream Guards, including the battles of Alma, Halaklava, and Inkerman,
and siege of Sebastopol (Medal and four Clasps, CJB., officer of the Legion of Honor, 3rd
Class of the Medjidie, and Turkish Medal).
137 Major General Smyth served with the 16th Lancers at the siege of Bhurtpore, under Lord
Combermere (Medal). Served the Gwalior campaign of 1843 and commanded the advanced
wing of the cavalry at the action of Maharajpore under Sir Joseph Tbackwell—horse
wounded (Medal). Served in the Sutlej campaign in 1846, commanded the 16th Lancers at
the battle of Aliwal, at which he captured eleven pieces of artillery and drove the Sikh force of
Infantry completely off the field after three distinct charges—severely wounded through the
thigh in the first charge. (Mentioned in despatches. Brevet of Lt.Colonel, CB. Medal with
with Clasp).
138 Major General H. J. French served in the 85th Light Infantry in the Peninsula from
August 1813 to the end of that war in 1814, including the Siege of St. Sebastian, passage of the
Bidassoa, battles of Nivelle 10th November, and Nive on 9th 10th and 11th December, and in¬
vestment of Bayonne (War Medal with two Clasps). Served also in the American war, in the
actions of Bladensburg and Baltimore, the attack on New Orleans, and taking of Fort Bowyer.
He subsequently served in the same Kegiment during the whole of the Canadian Rebellion of
1837-38.
139 Major General Crofton was appointed Persian interpreter to the force under Brigadier
General Litchfield in August 1832, and served with it throughout the arduous operations in
Parkur, and against the tribes in the N.W. Desert, which ended in the taking of Balmeer. He
was also employed at the defence of Aden against the Arabs in 1840-41; and commanded the
expedition sent to the P.ed River, Prince Rupert’s Land, via Hudson’s Bay, in 1846, under in¬
structions for the defence of the British settlements in the event of war with America for the
Oregon Territory. For this service he received the thanks of the Duke of Wellington and
the Colonial Secretary.
140 Major General Grattan was actively employed on the frontiers during the rebellion in
Canada in 1838. He served in China with the 18th Royal Irish (Medal), and was present at the
storming of the heights above Canton, and led the advance against the enemy’s entrenched camp,
for which he was selected by Sir Hugh Gough as the bearer of his despatches, promoted to the
rank of Major, and appointed Brigade-Major of Fort St. George by Lord Hill. On his return to
China—on board the Madagascar—in charge of Lord Auckland’s despatches; the ship having
caught fire during a gale of wind, he with a few others narrowly escaped the fate of fifty-seven
souls who perished upon that occasion; he fell into the bands of the Chinese, and was detained
108 days in captivity; after which he was at the attack of Segoan, and commanded the 18th
(after the fall of Lt.-Col. Tomlinson), at Chapoo, Woosung, and Cbanghai; and he was present
at the storming of Chin Kiang Foo and the lauding before Nankin. Served with the 18th Royal
Irish in the last campaign in Burmah (Medal).
141 Major General Sullivan served the Eastern campaign of 1854 and up to 4th March
1855, as Assistant Adjutant General to the Light Division, including the battles of the Alma,
Balaklava, and Inkerman (horse shot), and siege of Sebastopol (Medal and Clasps, CB.,
Knight of the Legion of Honor, 4th Class of the Medjidie, and Turkish Medal),
142 Major General Edward Trevor served the campaign of 1814 in Holland; and that of
1815 in Flanders and France, and was present at the battle of Waterloo and captures of
Cambray and Paris.
143 Major General Bainbrigge served with the 20th in the Peninsula, in 1808 and 9, and
again in 1812 and 13, and was present at the battles of Vimiera, Corunna, Viltoria, and the
Pyrenees (where he was twice wounded and lost an arm), for which he has received the War
Medal with four Clasps. Served also in the Walcheren expedition.
144 Major General Cunynghame proceeded to China in 1841 as Aide de Camp to Lord Sal-
toun, and was present at the storm and capture of Chin-kiang-foo (led the column of attack
on the heights of Makuikiow), and at the investment of Nankin (Medal). In 1854 accom¬
panied the army to the East as Assistant Quarter Master General to the 1st Division, was pre¬
sent at the affair of Bulganack, battle of the Alma, taking of Balaklava, affair of 23rd O, t.
on the heights of the Tchernaya, battles of Balaklava and Inkerman (served with the Guards
in the Sand-bag battery, and led into action a detached portion of the 20th Ilegt.), and siege
of Sebastopol up to May 1855 (Medal and four Clasps, CB., Officer of the Legion of Honor,
Turkish Medal, and 4th Class of the Medjidie). In March 1855 was appointed local Major
General, in May took command of a Division of the Turkish Contingent, and in Aug.
received the personal thanks of the Sultan and was created a Lieut.General in the Turkish army.
In Oct. 1855 sailed in command of 10,009 men to occupy Kertch, and assisted to maintain that
position throughout the second winter in the Crimea (Turkish War Medal, and 3rd Class of
the Medjidie).
145 Major General Le Mesurier served in the 24th at the capture of the Cape of Good Hope
in 1806. In 1811, he joined the 2nd Battalion in the Peninsula, where he served until the end
of that war in 1814, and was present at the sieges of Ciudad Rodrigo, Badajoz, battles of Sala¬
manca, Vittoria, Pyrenees,Echalar, NiveUe, and Orthes (severely contused); and in the several
affairs on the banks of the Dourdogne in front of Bordeaux, being on continual advance guard
when that part of the army was moving forward on Angoulcme. He has received the War
Medal, with four Clasps.