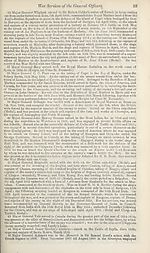 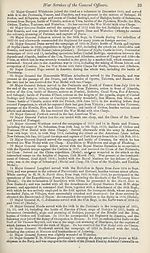 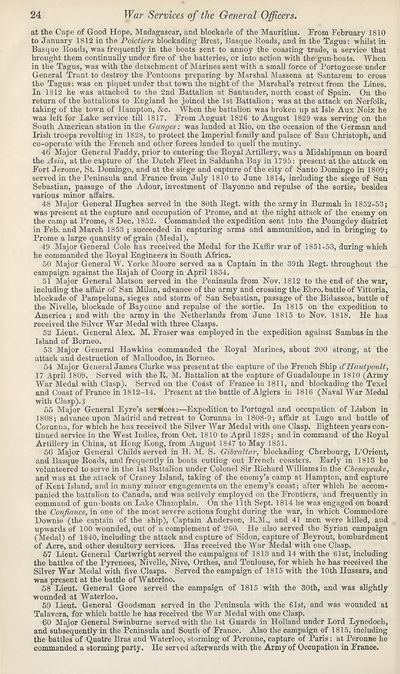 24
War Services of the General Officers.
at the Cape of Good Hope, Madagascar, and blockade of the Mauritius. From February 1810
to January 1812 in the Poictiers blockading- Brest, Basque Roads, and in the Tagus: whilst in
Basque Roads, was frequently in the boats sent to annoy the coasting trade, a service that
brought them continually under fire of the batteries, or into action with the gun-boats. When
in the Tagus, was with the detachment of Marines sent with a small force of Portuguese under
General Trant to destroy the Pontoons preparing by Marshal Massena at Santarem to cross
the Tagus: was on piquet under that town the night of the Marshal’s retreat from the Lines.
In 1812 he was attached to the 2nd Battalion at Santander, north coast of Spain. On the
return of the battalions to England he joined the 1st Battalion; was at the attack on Norfolk,
taking of the town of Hampton, &c. When the battalion was broken up at Isle Aux Noix he
was left for Lake service till 1817. From August 1826 to August 1829 was serving on the
South American station in the Ganges: was landed at Rio, on the occasion of the German and
Irish troops revolting in 1828, to protect the Imperial family and palace of San Christoph, and
co-operate with the French and other forces landed to quell the mutiny.
46 Major General Faddy, prior to entering the Royal Artillery, was a Midshipman on board
the Asia, at the capture of the Dutch Fleet in Saldanha Bay in 1795: present at the attack on
Fort Jerome, St. Domingo, and at the siege and capture of the city of Santo Domingo in 1809;
served in the Peninsula and France from July 1810 to June 1814, including the siege of San
Sebastian, passage of the Adour, investment of Bayonne and repulse of the sortie, besides
various minor affairs.
48 Major General Hughes served in the 80th Regt. with the army in Burmah in 1852-53;
was present at the capture and occupation of Prome, and at the night attack of the enemy on
the camp at Prome, 8 Dec. 1852. Commanded the expedition sent into the Poungdey district
in Feb. and March 1853 ; succeeded in capturing arms and ammunition, and in bringing to
Prome a large quantity of grain (Medal).
49 Major General Cole has received the Medal for the Kaffir war of 1851-53, during which
he commanded the Royal Engineers in South Africa.
50 Major General W. Yorke Moore served as a Captain in the 39th Regt. throughout the
campaign against the Rajah of Coorg in April 1834.
51 Major General Matson served in the Peninsula from Nov. 1812 to the end of the war,
including the affair of San Milan, advance of the army and crossing the Ebro, battle of Vittoria,
blockade of Pampeluna, sieges and storm of San Sebastian, passage of the Bidassoa, battle of
the Nivelle, blockade of Bayonne and repulse of the sortie. In 1815 on the expedition to
America ; and with the army in the Netherlands from June 1815 to Nov. 1818. He has
received the Silver War Medal with three Clasps.
52 Lieut. General Alex. M. Fraser was employed in the expedition against Sambas in the
Island of Borneo.
53 Major General Hawkins commanded the Royal Marines, about 200 strong, at the
attack and destruction of Malloodoo, in Borneo.
54 Major General James Clarke was present at the capture of the French Ship d’Hautpoult,
17 April 1809. Served with theR. M. Battalion at the capture of Guadaloupe in 1810 (Army
War Medal with Clasp). Served on the Coast of France in 1811, and blockading the Texel
and Coast of France in 1812-14. Present at the battle of Algiers in 1816 (Naval War Medal
with Clasp).)
55 Major General Eyre’s services:—Expedition to Portugal and occupation of Lisbon in
1808; advance upon Madrid and retreat to Corunna in 1808-9; affair at Lugo and battle of
Corunna, for which he has received the Silver War Medal with one Clasp. Eighteen years con¬
tinued service in the West Indies, from Oct. 1810 to April 1828; and in command of the Royal
Artillery in China, at Hong Kong, from August 1847 to May 1851.
56 Major General Childs served in H. M. S. Gibraltar, blockading Cherbourg, L’Orient,
and Basque Roads, and frequently in boats cutting out French coasters. Early in 1813 he
volunteered to serve in the 1st Battalion under Colonel Sir Richard Williams in the Chesapeake,
and was at the attack of Craney Island, taking of the enemy’s camp at Hampton, and capture
of Kent Island, and in many minor engagements on the enemy’s coast; after which he accom¬
panied the battalion to Canada, and was actively employed on the Frontiers, and frequently in
command of gun-boats on Lake Champlain. On the 11th Sept. 1814 he was engaged on board
the Confiance, in one of the most severe actions fought during the war, in which Commodore
Downie (the captain of the ship), Captain Anderson, R.M., and 41 men were killed, and
upwards of 100 wounded, out of a complement of 260. He also served the Syrian campaign
(Medal) of 1840, including the attack and capture of Sidon, capture of Beyrout, bombardment
of Acre, and other desultory services. Has received the War Medal with one Clasp.
57 Lieut. General Cartwright served the campaigns of 1813 and 14 with the 61st, including
the battles of the Pyrenees, Nivelle, Nive, Orthes, and Toulouse, for which he has received the
Silver War Medal with five Clasps. Served the campaign of 1815 with the 10th Hussars, and
was present at the battle of Waterloo.
58 Lieut. General Gore served the campaign of 1815 with the 30th, and was slightly
wounded at Waterloo.
59 Lieut. General Goodsman served in the Peninsula with the 6lst, and was wounded at
Talavera, for which battle he has received the War Medal with one Clasp.
60 Major General Swinburne served with the 1st Guards in Holland under Lord Lynedoch,
and subsequently in the Peninsula and South of France. Also the campaign of 1815, including
the battles of Quatre Bras and Waterloo, storming of Peronne, capture of Paris: at Peronne he
commanded a storming party. He served afterwards with the Army of Occupation in France.