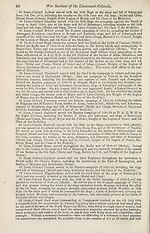 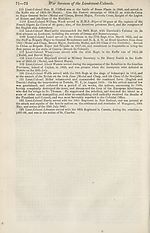 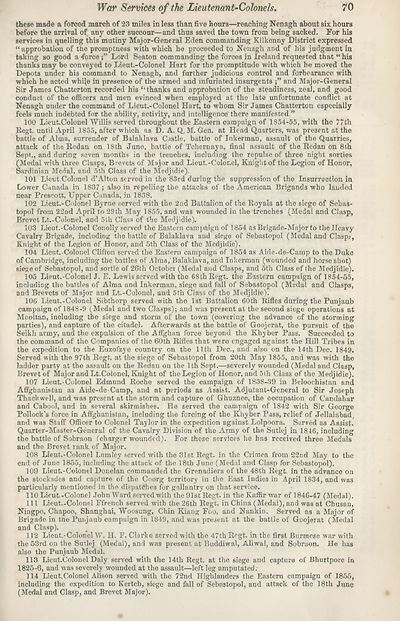 70
War Services of the Lieutenant-Colonels.
these made a forced march of 23 miles in less than five hours—reaching Nenagh about six hours
before the arrival of any other succour—and thus saved the town from being sacked. For his
services in quelling this mutiny Major-General Eden commanding Kilkenny District expressed
“approbation of the promptness with which he proceeded to Nenagh and of his judgment in
taking so good a force;” Lord Seaton commanding the forces in Ireland requested that “his
thanks may be conveyed to Lieut.-Colonel Hart for the promptitude with which he moved the
Depots under his command to Nenagh, and further judicious control and forbearance with
which he acted while in presence of the armed and infuriated insurgents and Major-General
Sir James Chatterton recorded his “thanks and approbation of the steadiness, zeal, and good
conduct of the ofiicers and men evinced when employed at the late unfortunate conflict at
Nenagh under the command of Lieut.-Colonel Hart, to whom Sir James Chatterton especially
feels much indebted for the ability, activity, and intelligence there manifested.”
100 Lieut.Colonel Willis served throughout the Eastern campaign of 1854-55, with the 77th
Regt. until April 1855, after which as D. A. Q, M. Gen. at Head Quarters, was present at the
battle of Alma, surrender of Balaklava Castle, battle of Inkerman, assault of the Quarries,
attack of the Redan on 18th June, battle of Tchernaya, final assault of the Redan on 8th
Sept., and during seven months in the trenches, including the repulse of three night sorties
(Medal with three Clasps, Brevets of Major and Lieut.-Colonel, Knight of the Legion of Honor,
Sardinian Medal, and 5th Class of the Medjidie).
101 Lieut.Colonel d’Alton served in the 83rd during the suppression of the Insurrection in
Lower Canada in 1837 ; also in repelling tbe attacks of the American Brigands who lauded
near Prescott, Upper Canada, in 1838.
102 Lieut.-Colonel Byrne served with the 2nd Battalion of the Royals at the siege of Sebas¬
topol from 22nd April to 29th May 1855, and was wounded in the trenches (Medal and Clasp,
Brevet Lt.-Coionel, and 5th Class of the Medjidie).
103 Lieut.-Colonel Conolly served the Eastern campaign of 1854 as Brigade-Major to the Heavy
Cavalry Brigade, including the battle of Balaklava and siege of Sebastopol (Medal and Clasps,
Knight of the Legion of Honor, and 5th Class of the Medjidie).
104 Lieut.-Colonel Clifton served the Eastern campaign of 1854 as Aide-de-Camp to the Duke
of Cambridge, including the battles of Alma,‘Balaklava, and Inkerman (wounded and horse shot)
siege of Sebastopol, and sortie of 26th October (Medal and Clasps, and 5th Class of the Medjidie).
105 Lieut.-Colonel J. E. Lewis served with the 68th Regt. the Eastern campaign of 1854-55,
including the battles of Alma and Inkerman, siege and fall of Sebastopol (Medal and Clasps,
and Brevets of Major and Lt.-Colonel, and 5th Class of the Medjidie).
106 Lieut.-Colonel Sibthorp served with the 1st Battalion 60th Rifles during the Punjaub
campaign of 1848-9 (Medal and two Clasps); and was present at the second siege operations at
Mooltan, including the siege and storm of the town (covering the advance of the storming
parties), and capture of the citadel. Afterwards at the battle of Goojerat, the pursuit of the
Seikh army, and the expulsion of the Affghan force beyond the Khyber Pass. Succeeded to
the command of the Companies of the 00th Rifles that were engaged against the Hill Tribes in
the expedition to the Euzofzye country on the 11th Dec., and also on the 14th Dec. 1849.
Served with the 97th Regt. at the siege of Sebastopol from 20th May 1855, and was with the
ladder party at the assault on the Redan on the 1th Sept.—severely wounded (Medal and Clasp,
Brevet of Major and Lt.Colonel, Knight of the Legion of Honor, and 5th Class of the Medjidie).
107 Lieut.-Colonel Edmund Roche served the campaign of 1838-39 in Beloochistan and
Affgbanistau as Aide-de-Camp, and at periods as Assist. Adjutant-General to Sir Joseph
Thackwell, and was present at the storm and capture of Ghuznee, the occupation of Candabar
and Cabool, and in several skirmishes. He served the campaign of 1842 with Sir George
Pollock’s force in Affghanistan, including the forcing of the Khyber Pass, relief of Jellalabad,
and was Staff Officer to Colonel Taylor in the expedition against Lolpoora. Served as Assist.
Quarter-Master-General of the Cavalry Division of the Army of the Sutlej in 1846, including
the battle of Sobraon (charger wounded). For these services he has received three Medals
and tbe Brevet rank of Major.
108 Lieut.-Colonel Lumley served with the 31st Regt. in the Crimea from 22nd May to the
end of June 1855, including the attack of the 18th June (Medal and Clasp for Sebastopol).
109 Lieut.-Colonel Donelan commanded the Grenadiers of the 48th Regt. in the advance on
the stockades and capture of the Coorg territory in the East Indies in April 1834, and was
particularly mentioned in the dispatches for gallantry on that service.
110 Lieut.-Colonel John Ward served with the 91st Regt. in the Kaffir war of 1846-47 (Medal).
111 Lieut.-Colonel Ffrench served with the 26th Regt. in China (Medal), and was at Chusan,
Ningpo, Chapoo, Shanghai, Woosung, Chin Kiang Foo, and Nankin. Served as a Major of
Brigade in the Punjaub campaign in 1849, and was present at the battle of Goojerat (Medal
and Clasp).
112 Lieut.-Colonel W. H. F. Clarke served with the 47thRegt. in the first Burmese war with
the 53rd on the Sutlej (Medal), and was present at Buddiwal, Aliwal, and Sobraon. He has
also the Punjaub Medal.
113 Lieut.Colonel Daly served with the 14th Regt. at the siege and capture of Bhurtpore in
1825-6, and was severely wounded at the assault—left leg amputated.
114 Lieut.Colonel Alison served with the 72nd Highlanders the Eastern campaign of 1855,
including the expedition to Kertch, siege and fall of Sebastopol, and attack of the 18th June
(Medal and Clasp, and Brevet Major).