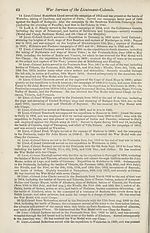 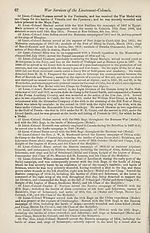 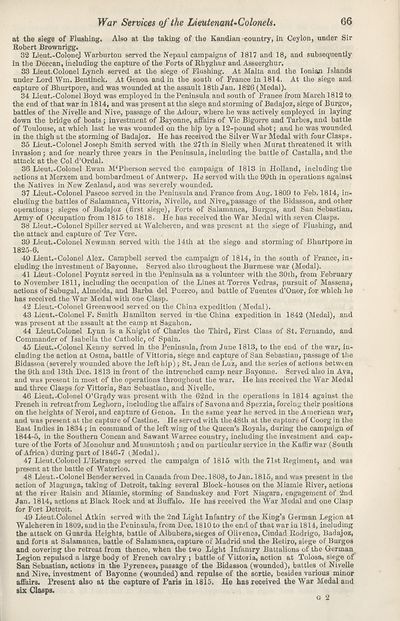 War Services of the Lieutenant-Colonels. 66
at the siege of Flushing. Also at the taking of the Kandian country, in Ceylon, under Sir
Robert Brownrigg.
32 Lieut.-Colonel Warburton served the Nepaul campaigns of 1817 and 18, and subsequently
in the Deccan, including the capture of the Forts of Rhyghur and Asseerghur.
33 Lieut.Colonel Lynch served at the siege of Flushing. At Malta and the Ionian Islands
under Lord Wm. Bentinck. At Genoa and in the south of France in 1814. At the siege and
capture of Bhurtpore, and was wounded at the assault 18th Jan. 1826 (Medal).
34 Lieut.-Colonel Boyd was employed in the Peninsula and south of France from March 1812 to
the end of that war in 1814, and was present at the siege and storming of Badajoz, siege of Burgos,
battles of the Nivelle and Nive, passage of the Adour, where he was actively employed in laying
down the bridge of boats ; investment of Bayonne, affairs of Vic Bigorre and Tarbes, and battle
of Toulouse, at which last he was wounded on the hip by a 12-pound shot; and he was wounded
in the thigh at the storming of Badajoz. He has received the Silver War Medal with four Clasps.
35 Lieut.-Colonel Joseph Smith served with the 27th in Sicily when Murat threatened it with
invasion; and for nearly three years in the Peninsula, including the battle of Castalla, and the
attack at the Col d’Ordal.
36 Lieut.-Colonel Ewan M'Pherson served the campaign of 1813 in Holland, including tlie
actions at Merxem and bombardment of Antwerp. He served with the 99th in operations against
the Natives in New Zealand, and was severely wounded.
37 Lieut.-Colonel Pascoe served in the Peninsula and France from Aug. 1809 to Feb. 1814, in¬
cluding the battles of Salamanca, Vittoria, Nivelle, and Nive, passage of the Bidassoa, and other
operations; sieges of .Badajoz (first siege), Forts of Salamanca, Burgos, and San Sebastian.
Army of Occupation from 1815 to 1818. He has received the War Medal with seven Clasps.
38 Lieut.-Colonel Spiller served at Walcheren, and was present at the siege of Flushing, and
the attack and capture of Ter Vere.
39 Lieut.-Colonel Newman served with the 14th at the siege and storming of Bhurtpore in
1825-6.
40 Lieut.-Colonel Alex. Campbell served the campaign of 1814, in the south of France, in¬
cluding the investment of Bayonne. Served also throughout the Burmese war (Medal).
41 Lieut -Colonel Poyntz served in the Peninsula as a volunteer with the 30th, from February
to November 1811, including the occupation of the Lines at Torres Vedras, pursuit of Massena,
actions of Sabugal, Almeida, and Barba del Puerco, and battle of Fuentes d’Onor, for which he
has received the War Medal with one Clasp.
42 Lieut.-Colonel Greenwood served on the China expedition (Medal).
43 Lieut.-Colonel F. Smith Hamilton served in the China expedition in 1842 (Medal), and
was present at the assault at the camp at Sagahon.
44 Lieut.Colonel Lynn is a Knight of Charles the Third, First Class of St. Fernando, and
Commander of Isabella the Catholic, of Spain.
45 Lieut.-Colonel Kenny served in the Peninsula, from June 1813, to the end of the war, in¬
cluding the action at Osma, battle of Vittoria, siege and capture of San Sebastian, passage of the
Bidassoa (severely wounded above the left hip); St. Jean de Luz, and the series of actions between
the 9th and 13th Dec. 1813 in front of the intrenched camp near Bayonne. Served also in Ava,
and was present in most of the operations throughout the war. He has received the War Medal
and three Clasps for Vittoria, San Sebastian, and Nivelle.
46 Lieut.-Colonel O’Grady was present with the 62nd in the operations in 1814 against, the
French in retreatfrom Leghorn, including the affairs of Savona and Spezzia, forcing their positions
on the heights of Neroi, and capture of Genoa. In the same year he served in the American war,
and was present at the capture of Castine. He served with the 48th at the capture of Coorg in the
East Indies in 1834 ; in command of the left wing of the Queen’s Royals, during the campaign of
1844-5, in the Southern Concan and Sawant Warree country, including the investment and cap¬
ture of the Forts of Monohur and Munsuntosh ; and on particular service in the Kaffir war (South
of Africa) during part of 1846-7 (Medal).
47 Lieut.Colonel L’Estrange served the campaign of 1815 with the 71st Regiment, and was
present at the battle of Waterloo.
48 Lieut.-Colonel Bender served in Canada from Dec. 1808, to Jan. 1815, and was present in the
action of Maguaga, taking of Detroit, taking several Block-houses on the Miamie River, actions
at the river Raisin and Miamie, storming of Sanduskey and Fort Niagara, engagement of 2nd
Jan. 1814, actions at Black Rock and at Buffalo. He has received the War Medal and one Clasp
for Fort Detroit.
49 Lieut.Colonel Atkin served with the 2nd Light Infantry of the King’s German Legion at
Walcheren in 1809, and in the Peninsula, from Dec. 1810to the end of that war in 1814, including
the attack on Guarda Heights, battle of Albuhera, sieges of Olivenca, Ciudad Rodrigo, Badajoz,
and forts at Salamanca, battle of Salamanca, capture of Madrid and the Retiro, siege of Burgos
and covering the retreat from thence, when the two Light Infantry Battalions of the German
Legion repulsed a large body of French cavalry ; battle of Vittoria, action at Tolosa, siege of
San Sebastian, actions in the Pyrenees, passage of the Bidassoa (wounded), battles of Nivelle
and Nive, investment of Bayonne (wounded) and repulse of the sortie, besides various minor
affairs. Present also at the capture of Paris iu 1815. He has received the War Medal and
six Clasps.
g 2