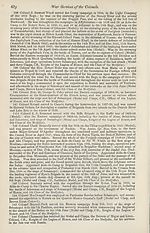 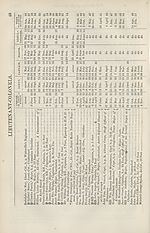 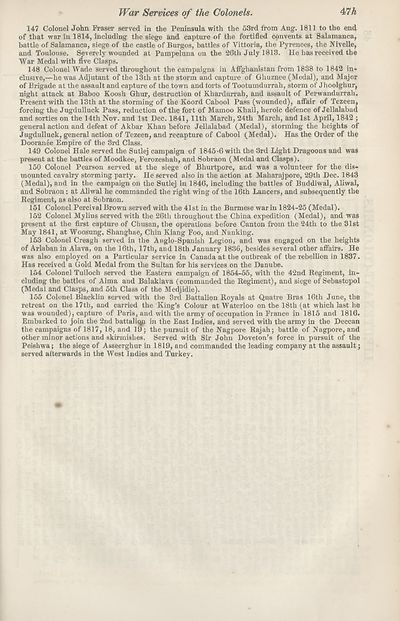 47A
War Services of the Colonels.
147 Colonel John Fraser served in the Peninsula with the 53rd from Aug. 1811 to the end
of that war in 1814, including the siege and capture of the fortified convents at Salamanca,
battle of Salamanca, siege of the castle of Burgos, battles of Yittoria, the Pyrenees, the Nivelle,
and Toulouse. Severely wounded at Pampeluna on the 26th July 1813. He has received the
War Medal with five Clasps.
148 Colonel Wade served throughout the campaigns in Affghanistan from 1838 to 1842 in¬
clusive,—he was Adjutant of the 13th at the storm and capture of Ghuznee (Medal), and Major
of Brigade at the assault and capture of the town and forts of Tootumdurrah, storm of Jhoolghur,
night attack at Baboo Koosh Ghur, destruction of Khardurrah, and assault of Perwandurrah.
Present with the 13th at the storming of the Koord Cabool Pass (wounded), aifair of Tezeen,
forcing the Jugdulluck Pass, reduction of the fort of Mamoo Khail, heroic defence of Jellalabad
and sorties on the 14th Nov. and 1st Dec. 1841, 11th March, 24th March, and 1st April, 1842 ;
general action and defeat of Akbar Khan before Jellalabad (Medal), storming the heights of
Jugdulluck, general action of Tezeen, and recapture of Cabool (Medal). Has the Order of the
Dooranee Empire of the 3rd Class.
149 Colonel Hale served the Sutlej campaign of 1845-6 with the 3rd Light Dragoons and was
present at the battles of Moodkee, Ferozeshah, and Sobraon (Medal and Clasps).
150 Colonel Pearson served at the siege of Bhurtpore, and was a volunteer for the dis¬
mounted cavalry storming party. He served also in the action at Maharajpore, 29th Dec. 1843
(Medal), and in the campaign on the Sutlej in 1846, including the battles of Buddiwal, Aliwal,
and Sobraon: at Aliwal he commanded the right wing of the 16th Lancers, and subsequently the
Regiment, as also at Sobraon.
151 Colonel Percival Brown served with the 41st in the Burmese war in 1824-25 (Medal).
152 Colonel Mylius served with the 26th throughout the China expedition (Medal), and was
present at the first capture of Chusan, the operations before Canton from the 24th to the 31st
May 1841, at Woosung, Shanghae, Chin Kiang Foo, and Nanking.
153 Colonel Creagh served in the Anglo-Spanish Legion, and was engaged on the heights
of Arlaban in Alava, on the 16th, 17th, and 18th January 1836, besides several other affairs. He
was also employed on a Particular service in Canada at the outbreak of the rebellion in 1837.
Has received a Gold Medal from the Sultan for his services on the Danube.
154 Colonel Tulloch served the Eastern campaign of 1854-55, with the 42nd Regiment, in¬
cluding the battles of Alma and Balaklava (commanded the Regiment), and siege of Sebastopol
(Medal and Clasps, and 5th Class of the Medjidie).
155 Colonel Blaeklin served with the 3rd Battalion Royals at Quatre Bras 16th June, the
retreat on the 17th, and carried the King’s Colour at Waterloo on the 18th (at which last he
was wounded), capture of Paris, and with the army of occupation in France in 1815 and 1816.
Embarked to join the 2nd battaliqn in the East Indies, and served with the army in the Deccan
the campaigns of 1817, 18, and 19; the pursuit of the Nagpore Rajah; battle of Nagpore, and
other minor actions and skirmishes. Served with Sir John Doveton’s force in pursuit of the
Peishwa; the siege of Asseerghur in 1819, and commanded the leading company at the assault;
served afterwards in the West Indies and Turkey.