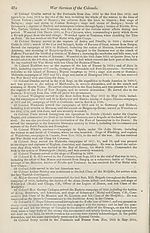 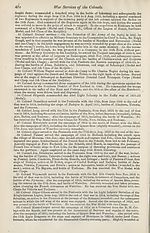 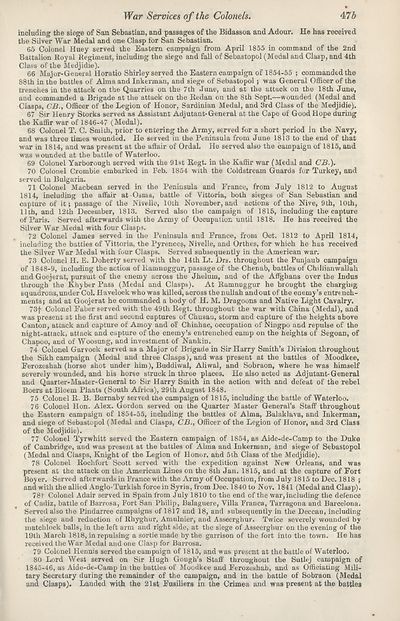 War Services of the Colonels. 476
including the siege of San Sebastian, and passages of the Bidassoa and Adour. He has received
the Silver War Medal and one Clasp for San Sebastian.
65 Colonel Huey served the Eastern campaign from April 1855 in command of the 2nd
Battalion Royal Regiment, including the siege and fall of Sebastopol (Medal and Clasp, and 4th
Class of the Medjidie).
66 Major-General Horatio Shirley served the Eastern campaign of 1854-55 ; commanded the
88th in the battles of Alma and Inkerman, and siege of Sebastopol j was General Officer of the
trenches in the attack on the Quarries on the 7th June, and at the attack on the 18th June,
and commanded a Brigade at the attack on the Redan on the 8lh Sept,—wounded (Medal and
Clasps, CB., Officer of the Legion of Honor, Sardinian Medal, and 3rd Class of the Medjidie).
67 Sir Henry Storks served as Assistant Adjutant-General at the Cape of Good Hope during
the Kaffir war of 1846-47 (Medal).
68 Colonel T. C. Smith, prior to entering the Army, served for a short period in the Navy,
and was three times wounded. He served in the Peninsula from June 1813 to the end of that
war in 1814, and was present at the affair of Ordal. He served also the campaign of 1815, and
was wounded at the battle of Waterloo.
69 Colonel Yarborough served with the 91st Regt. in the Kaffir war (Medal and CB.).
70 Colonel Crombie embarked in Feb. 1854 with the Coldstream Guards for Turkey, and
served in Bulgaria.
71 Colonel Macbean served in the Peninsula and Prance, from July 1812 to August
1814, including the affair at Osma, battle of Vittoria, both sieges of San Sebastian and
capture of it; passage of the Nivelle, 10th November, and actions of the Nive, 9th, 10th,
11th, and 12th December, 1813. Served also the campaign of 1815, including the capture
of Paris. Served afterwards with the Army of Occupation until 1818. He has received the
Silver War Medal with four Clasps.
72 Colonel James served in the Peninsula and Prance, from Oct. 1812 to April 1814,
including the battles of Vittoria, the Pyrenees, Nivelle, and Orthes, for which he has received
the Silver War Medal with four Clasps. Served subsequently in the American war.
73 Colonel H. E. Doherty served with the 14th Lt. Drs. throughout the Punjaub campaign
of 1848-9, including the action of Kamnuggur, passage of the Chenab, battles of Chillianwallah
and Goojerat, pursuit of the enemy across the Jhelum, and of the Affghans over the Indus
through the Khyber Pass (Medal and Clasps). At Ramnuggur he brought the charging
squadrons, under Col. Havelock who was killed, across the nullah andout of the enemy’s entrench¬
ments; and at Goojerat he commanded a body of H. M. Dragoons and Native Light Cavalry.
73j- Colonel Faber served with the 49th Regt. throughout the war with China (Medal), and
was present at the first and second captures of Chusau, storm and capture of the heights above
Canton, attack and capture of Amoy and of Chinhae, occupation of Ningpo and repulse of the
night-attack, attack and capture of the enemy’s entrenched camp on the heights of Segoan, of
Chapoo, and of Woosung, and investment of Nankin.
74 Colonel Garvock served as a Major of Brigade in Sir Harry Smith’s Division throughout
the Sikh campaign (Medal and three Clasps), and was present at the battles of Moodkee,
Perozeshah (horse shot under him), Buddiwal, Aliwal, and Sobraon, where he was himself
severely wounded, and his horse struck in three places. He also acted as Adjutant- General
and Quarter-Master-General to Sir Harry Smith in the action with and defeat of the rebel
Boers at Bloem Plaats (South Africa), 29th August 1848.
75 Colonel R. B. Burnaby served the campaign of 1815, including the battle of Waterloo.
76 Colonel Hon. Alex. Gordon served on the Quarter Master General’s Staff throughout
the Eastern campaign of 1854-55, including the battles of Alma, Balaklava, and Inkerman,
and siege of Sebastopol (Medal and Clasps, CB., Officer of the Legion of Honor, and 3rd Class
of the Medjidie).
77 Colonel Tyrwhitt served the Eastern campaign of 1854, as Aide-de-Camp to the Duke
of Cambridge, and was present at the battles of Alma and lukerman, and siege of Sebastopol
(Medal and Clasps, Knight of the Legion of Honor, and 5th Class of the Medjidie).
78 Colonel Rochfort Scott served with the expedition against New Orleans, and was
present at the attack on the American Lines on the 8th Jan. 1815, and at the capture of Fort
Bojer. Served afterwards in France with the Army of Occupation, from July 1815 to Dec. 1818 ;
and with the allied Anglo-Turkish force in Syria, from Dec. 1840 to Nov. 1841 (Medal and Clasp).
78t Colonel Adair served in Spain from J uly 1810 to the end of the war, including the defence
of Cadiz, battle of Barrosa, Fort San Philip, Balaguere, Villa Franca, Tarragona and Barcelona.
Served also the Pindarree campaigns of 1817 and 18, and subsequently in the Deccan, including
the siege and reduction of Rhyghur, Amulnier, and Asseerghur. Twice severely wounded by
matchlock balls, in the left arm and right side, at the siege of Asseerghur on the evening of the
19th March 1818, in repulsing a sortie made by the garrison of the fort into the town. He has
received the War Medal and one Clasp for Barrosa.
79 Colonel Hennis served the campaign of 1815, and was present at the battle of Waterloo.
80 Lord West served on Sir Hugh Gough’s Staff throughout the Sutlej campaign of
1845-46, as Aide-de-Camp in the battles of Moodkee and Perozeshah, and as Officiating Mili¬
tary Secretary during the remainder of the campaign, and in the battle of Sobraon (Medal
and Clasps). Landed with the 21st Fusiliers in the Crimea and was present at the battles