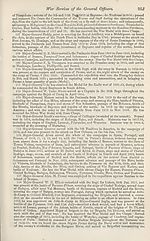 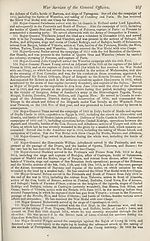 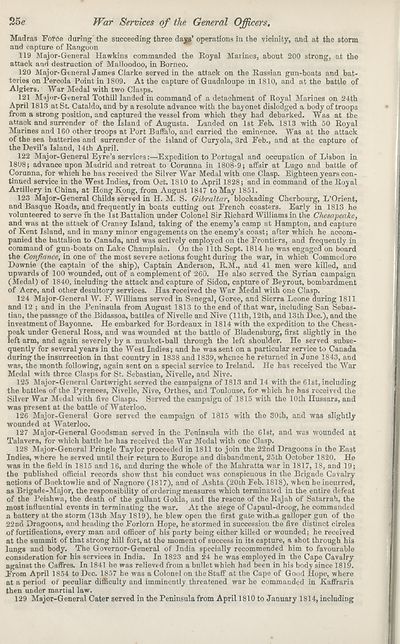 25e
War Services of the General Officers.
Madras Force during'the succeeding three days’operations in the vicinity, and at the storm
and capture of Rangoon
119 Major-General Hawkins commanded the Royal Marines, about 200 strong, at the
attack and destruction of Malloodoo, in Borneo.
120 Major-General James Clarke served in the attack on the Russian gun-boats and bat¬
teries on Percola Point in 1809. At the capture of Guadaloupe in 1810, and at the battle of
Algiers. War Medal with two Clasps.
121 Msjor-General Tothill landed in command of a detachment of Royal Marines on 24th
April 1813 at St. Cataldo, and by a resolute advance with the bayonet dislodged a body of troops
from a strong position, and captured the vessel from which they had debarked. Was at the
attack and surrender of the Island of Augusta. Landed on 1st Feb. 1813 with 50 Royal
Marines and 160 other troops at Port Buffalo, and carried the eminence. Was at the attack
of the sea batteries and surrender of the island of Curyola, 3rd Feb., and at the capture of
the Devil’s Island, 14th April.
122 Major-General Eyre’s services:—Expedition to Portugal and occupation of Lisbon in
1808; advance upon Madrid and retreat to Corunna in 1808-9; affair at Lugo and battle of
Corunna, for which he has received the Silver War Medal with one Clasp. Eighteen years con¬
tinued service in the West Indies, from Oct. 1810 to April 1828; and in command of the Royal
Artillery in China, at Hong Kong, from August 1847 to May 1851.
123 Major-General Childs served in H. M. S. Gibraltar, blockading Cherbourg, L’Orient,
and Basque Roads, and frequently' in boats cutting out French coasters. Early in 1813 ho
volunteered to serve in the 1st Battalion under Colonel Sir Richard Williams in the Chesapeake,
and was at the attack of Craney Island, taking of the enemy’s camp at Hampton, and capture
of Kent Island, and in many minor engagements on the enemy’s coast; after which he accom¬
panied the battalion to Canada, and was actively employed on the Frontiers, and frequently in
command of gun-boats on Lake Champlain. On the 11th Sept. 1814 he was engaged on board
the Confance, in one of the most severe actions fought during the war, in which Commodore
Downie (the captain of the ship), Captain Anderson, R.M., and 41 men were killed, and
upwards of 100 wounded, out of a complement of 260. He also served the Syrian campaign
(Medal) of 1840, including the attack and capture of Sidon, capture of Beyrout, bombardment
of Acre, and other desultory services. Has received the War Medal with one Clasp.
124 Major-General W. F. Williams served in Senegal, Goree, and Sierra Leone during 1811
and 12 ; and in the Peninsula from August 1813 to the end of that war, including San Sebas¬
tian, the passage of the Bidassoa, battles of Nivelle and Nive (11th, 12th, and 13th Dec.), and the
investment of Bayonne. He embarked for Bordeaux in 1814 with the expedition to the Chesa-
peak under General Ross, and was wounded at the battle of Bladensburg, first slightly in the
left arm, and again severely by a musket-ball through the left shoulder. He served subse¬
quently for several years in the West Indies; and he was sent on a particular service to Canada
during the insurrection in that country in 1838 and 1839, whence he returned in June 1843, and
was, the month following, again sent on a special service to Ireland. He has received the War
Medal with three Clasps for St. Sebastian, Nivelle, and Nive.
125 Major-General Cartwright served the campaigns of 1813 and 14 with the 61st, including
the battles of the Pyrenees, Nivelle, Nive, Orthes, and Toulouse, for which he has received the
Silver War Medal with five Clasps. Served the campaign of 1815 with the 10th Hussars, and
was present at the battle of Waterloo.
126 Major-General Gore served the campaign of 1815 with the 30th, and was slightly
wounded at Waterloo.
127 Major-General Goodsman served in the Peninsula with the 6lst, and was wounded at
Talavera, for which battle he has received the War Medal with one Clasp.
128 Major-General Pringle Taylor proceeded in 1811 to join the 22nd Dragoons in the East
Indies, where he served until their return to Europe and disbandment, 25th October 1820. He
was in the field in 1815 and 16, and during the whole of the Mahratta war in 1817, 18, and 19;
the published official records show that his conduct was conspicuous in the Brigade Cavalry
actions of Bucktowlie and of Nagnore (1817), and of Ashta (20th Feb. 1818), when he incurred,
as Brigade-Major, the responsibility of ordering measures which terminated in the entire defeat
of the Peishwa, the death of the gallant Gokla, and the rescue of the Rajah of Satarrah, the
most influential events in terminating the war. At the siege of Capaul-droog, he commanded
a battery at the storm (13th May 1819), he blew open the first gate with-a galloper gun of the
22nd Dragoons, and heading the Forlorn Hope, he stormed in succession the five distinct circles
of fortifications, every man and officer of his party being either killed or wounded; he received
at the summit of that strong hill fort, at the moment of success in its capture, a shot through his
lungs and body. The Governor-General of India specially recommended him to favourable
consideration for his services in India. In 1823 and 24 he was employed in the Cape Cavalry
against the Caffres. In 1841 he was relieved from a bullet which had been in his body since 1819.
From April 1854 to Dec. 1857 be was a Colonel on the Staff at the Cape of Good Hope, where
at a period of peculiar difficulty and imminently threatened war he commanded in Kaffraria
then under martial law.
129 Major-General Cater served in the Peninsula from April 1810 to January 1814, including