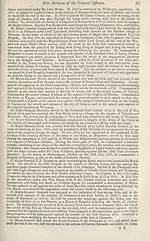 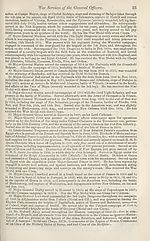 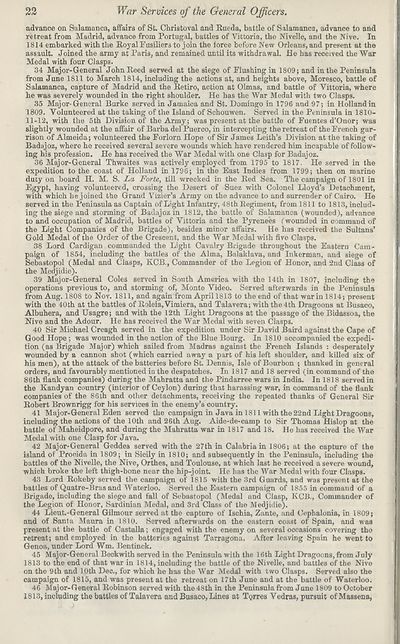 22
War Services of the General Officers.
advance on Salamanca, affairs of St. Christoval and Eueda, battle of Salamanca, advance to and
retreat from Madrid, advance from Portugal, battles of Vittoria, the Nivelle, and the Nive. In
1814embarked with the EoyalPusiliers to join the force before New Orleans,and present at the
assault. Joined the army at Paris, and remained until its withdrawal. He has received the War
Medal with four Clasps.
34 Major-General JohnEeed served at the siege of Flushing in 1809; and in the Peninsula
from June 1811 to March 1814, including the actions at, and heights above, Moresco, battle of
Salamanca, capture of Madrid and the Eetiro, action at Olmas, and battle of Vittoria, where
he was severely wounded in the right shoulder. He has the War Medal with two Clasps.
35 Major-General Burke served in Jamaica and St. Domingo in 1796 and 97; in Holland in
1809. Volunteered at the taking of the Island of Schouwen. Served in the Peninsula in 1810-
11-12, with the 5th Division of the Army; was present at the battle of Fuentes d’Onor; was
slightly wounded at the affair of Barba del Puerco, in intercepting the retreat of the French gar¬
rison of Almeida; volunteered the Forlorn Hope of Sir James Leith’s Division at the taking of
Badajoz, where he received several severe wounds which have rendered him incapable of follow¬
ing his profession. He has received the War Medal with one Clasp for Badajoz.
36 Major-General Thwaites was actively employed from 1795 to 1817. He served in the
expedition to the coast of Holland in 1796; in the East Indies from 1799; then on marine
duty on board H. M. S. La Forte, till wrecked in the Eed Sea. The campaign of 1801 in
Egypt, having volunteered, crossing the Desert of Suez with Colonel Lloyd’s Detachment,
with which he joined the Grand Vizier’s Army on the advance to and surrender of Cairo. He
served in the Peninsula as Captain of Light Infantry, 48th Regiment, from 1811 to 1813, includ¬
ing the siege and storming of Badajoz in 1812, the battle of Salamanca (wounded), advance
to and occupation of Madrid, battles of Vittoria and the Pyrenees (wounded in command of
the Light Companies of the Brigade), besides minor affairs. He has received the Sultans’
Gold Medal of the Order of the Crescent, and the War Medal with five Clasps.
38 Lord Cardigan commanded the Light Cavalry Brigade throughout the Eastern Cam¬
paign of 1854, including the battles of the Alma, Balaklava, and Inkerman, and siege of
Sebastopol (Medal and Clasps, KCB., Commander of the Legion of Honor, and 2nd Class of
the Medjidie).
39 Major-General Coles served in South America with the 14th in 1807, including the
operations previous to, and storming of, Monte Video. Served afterwards in the Peninsula
from Aug. 1808 to Nov. 1811, and again from April 1813 to the end of that war in 1814; present
with the 40th at the battles of Eoleia, Vimiera, and Talavera; with the 4th Dragoons at Busaco,
Albuhera, and Usagre; and with the 12th Light Dragoons at the passage of the Bidassoa, the
Nive and the Adour. He has received the War Medal with seven Clasps.
40 Sir Michael Creagh served in the expedition under Sir David Baird against the Cape of
Good Hope ; was wounded in the action of the Blue Bourg. In 1810 accompanied the expedi¬
tion (as Brigade Major) which sailed from Madras against the French Islands : desperately
wounded by a cannon shot (which carried away a part of his left shoulder, and killed six of
his men), at the attack of the batteries before St. Dennis, Isle of Bourbon ; thanked in general
orders, and favourably mentioned in the despatches. In 1817 and 18 served (in command of the
86th flank companies) during the Mahratta and the Pindarree wars in India. In 1818 served in
the Kandyan country (interior of Ceylon) during that harassing war, in command of the flank
companies of the 86 th and other detachments, receiving the repeated thanks of General Sir
Eobert Brownrigg for his services in the enemy’s country.
41 Major-General Eden served the campaign in Java in 1811 with the 22nd Light Dragoons,
including the actions of the 10th and 26th Aug. Aide-de-camp to Sir Thomas Hislop at the
battle of Maheidpore, and during the Mahratta war in 1817 and 18. He has received the War
Medal with one Clasp for Java.
42 Major-General Geddes served with the 27th in Calabria in 1806; at the capture of the
island of Prooida in 1809; in Sicily in 1810; and subsequently in the Peninsula, including the
battles of the Nivelle, the Nive, Orthes, and Toulouse, at which last he received a severe wound,
which broke the left thigh-bone near the hip-joint. He has the War Medal with four Clasps.
43 Lord Eokeby served the campaign of 1815 with the 3rd Guards, and was present at the
battles of Quatre-Bras and Waterloo. Served the Eastern campaign of 1855 in command of a
Brigade, including the siege and fall of Sebastopol (Medal and Clasp, KCB., Commander of
the Legion of Honor, Sardinian Medal, and 3rd Class of the Medjidie).
44 Lieut.-General Gilmour served at the capture of Ischia, Zante, and Cephalonia, in 1809;
and of Santa Maura in 1810. Served afterwards on the eastern coast of Spain, and was
present at the battle of Castalla; engaged with the enemy on several occasions covering tha
retreat; and employed in the batteries against Tarragona. After leaving Spain he went to
Genoa, under Lord Wm. Bentinck.
45 Major-General Beckwith served in the Peninsula with the 16th Light Dragoons, from July
1813 to the end of that war in 1814, including the battle of the Nivelle, and battles of the Nive
on the 9th and 10th Dec., for which he has the War Medal with two Clasps. Served also the
campaign of 1815, and was present at the retreat on 17th June and at the battle of Waterloo.
46 Major-General Eobinson served with the 48th in the Peninsula from June 1809 to October
1813, including the battles of Talavera and Busaco, Lines at Torres Vedras, pursuit of'Massena,