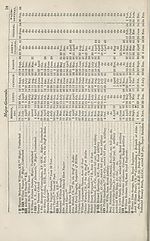 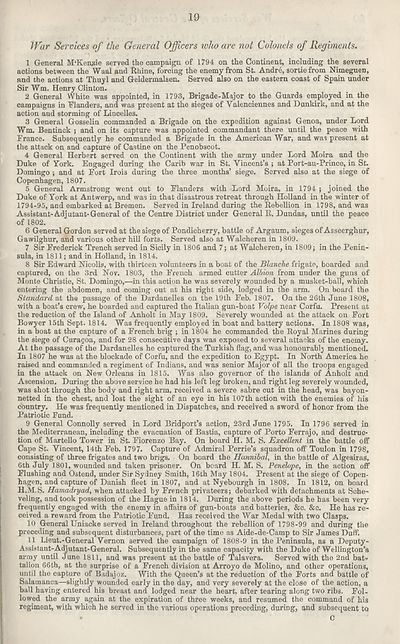 19
War Services of the General Officers ivko are not Colonels of Regiments.
1 General M‘Keiude served the campaign of 1794 on the Continent, including the several
actions between the Waal and Rhine, forcing the enemy from St. Andre, sortie from Nimeguen,
and the actions at Thuyl and Geldermalsen. Served also on the eastern coast of Spain under
Sir Wm. Henry Clinton.
2 General White was appointed, in 1793, Brigade-Major to the Guards employed in the
campaigns in Flanders, and was present at the sieges of Valenciennes and Dunkirk, and at the
action and storming of Lincelles.
3 General Gosselin commanded a Brigade on the expedition against Genoa, under Lord
Wm. Bentinck ; and on its capture was appointed commandant there until the peace with
France. Subsequently he commanded a Brigade in the American War, and was present at
the attack on and capture of Castine on the Penobscot.
4 General Herbert served on the Continent with the army under Lord Moira and the
Duke of York. Engaged during the Carib war in St. Vincent’s ; at Port-au-Prince, in St.
Domingo ; and at Fort Irois during the three months’ siege. Served also at the siege of
Copenhagen, 1807.
5 General Armstrong went out to Flanders with Lord Moira, in 1794 ; joined the
Duke of York at Antwerp, and was in that disastrous retreat through Holland in the winter of
1794-95, and embarked at Bremen. Served in Ireland during the Rebellion in 1798, and was
Assistant-Adjutant-General of the Centre District under General R. Dundas, until the peace
of 1802.
6 General Gordon served at the siege of Pondicherry, battle of Argaum, sieges of Asseerghur,
Gawilghur, and various other hill forts. Served also at Walcheren in 1809.
7 Sir Frederick Trench served in Sicily in 180G and 7; at Walcheren, in 1809; in the Penin¬
sula, in 1811; and in Holland, in 1814.
8 Sir Edward Nieolls, with thirteen volunteers in a boat of the Blanche frigate, boarded and
captured, on the 3rd Nov. 1803, the French armed cutter Albion from under the guns of
Monte Christie, St. Domingo,—in this action he was severely wounded by a musket-ball, which
entering the abdomen, and coming out at his right side, lodged in the arm. On board the
Standard at the passage of the Dardanelles on the 19th Feb. 1807. On the 26th June 1808,
with a boat’s crew, he boarded and captured the Italian gun-boat Volpe near Corfu. Present at
the reduction of the Island of Anholt in May 1809. Severely wounded at the attack on Fort
Bowyer 15th Sept. 1814. Was frequently employed in boat and battery actions. In 1808 was,
in a boat at the capture of a French brig ; in 1804 he commanded the Royal Marines during
the siege of Curacoa, and for 28 consecutive days was exposed to several attacks of the enemy.
At the passage of the Dardanelles he captured the Turkish flag, and was honourably mentioned.
In 1807 he was at the blockade of Corfu, and the expedition to Egypt. In North America he
raised and commanded a regiment of Indians, and was senior Major of all the troops engaged
in the attack on New Orleans in 1815. Was also governor of the islands of Anholt and
Ascension. During the above service he had his left leg broken, and right leg severely wounded,
was shot through the body and right arm, received a severe sabre cut in the head, was bayon-
netted in the chest, and lost the sight of an eye in his 107th action with the enemies of his
country. He was frequently mentioned in Dispatches, and received a sword of honor from the
Patriotic Fund.
9 General Connolly served in Lord Bridport’s action, 23rd June 1795. In 1796 served in
the Mediterranean, including the evacuation of Bastia, capture of Porto Ferrajo, and destruc¬
tion of Martello Tower in St. Fiorenzo Bay. On board H. M. S. Excellent in the battle off
Cape St. Vincent, 14th Feb. 1797. Capture of Admiral Perrie’s squadron off Toulon in 1798,
consisting of three frigates and two brigs. On board the Hannibal, in the battle of Algesiras,
6th July 1801, wounded and taken prisoner. On board H. M. S. Penelope, in the action off
Flushing and Ostend, under Sir Sydney Smith, 16th May 1804. Present at the siege of Copen¬
hagen, and capture of Danish fleet in 1807, and at Nyebourgh in 1808. In 1812, on board
H.M.S. Hamadryad, when attacked by French privateers; debarked with detachments at Sche-
veling, and took possession of the Hague in 1814. During the above periods he has been very
frequently engaged with the enemy in affairs of gun-boats and batteries, &c. &c. He has re¬
ceived a reward from the Patriotic Fund. Has received the War Medal with two Clasps.
10 General Uniacke served in Ireland throughout the rebellion of 1798-99 and during the
preceding and subsequent disturbances, part of the time as Aide-de-Camp to Sir James Duff.
11 Lieut.-General Vernon served the campaign of 1808-9 in the Peninsula, as a Deputy-
Assistant-Adjutant-General. Subsequently in the same capacity with the Duke of Wellington’s
army until June 1811, and was present at the battle of Talavera. Served with the 2nd bat¬
talion 66 th, at the surprise of a French division at Arroyo de Molino, and other operations,
until the capture of Badajoz. With the Queen’s at the reduction of the Forts and battle of
Salamanca—slightly wounded early in the day, and very severely at the close of the action, a
ball having entered his breast and lodged near the heart, after tearing along two ribs. Fol¬
lowed the army again at the expiration of three weeks, and resumed the command of his
regiment, with which he served in the various operations preceding, during, and subsequent to
• C