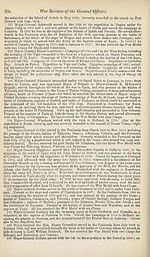 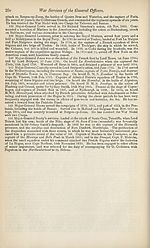 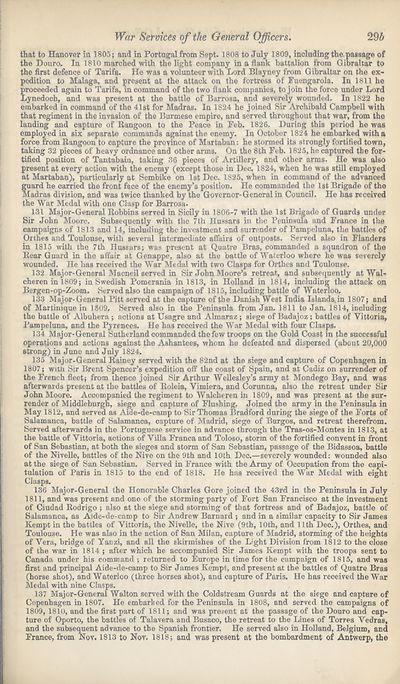 296
War Services of the General Officers.
that to Hanover in 1805; and in Portugal from Sept. 1808 to July 1809, including the passage of
the Douro. In 1810 marched with the light company in a flank battalion from Gibraltar to
the first defence of Tarifa. He was a volunteer with Lord Blayney from Gibraltar on the ex¬
pedition to Malaga, and present at the attack on the fortress of Fuengarola. In 1811 he
proceeded again to Tarifa, in command of the two flank companies, to join the force under Lord
Lynedoch, and was present at the battle of Barrosa, and severely wounded. In 1822 he
embarked in command of the 41st for Madras. In 1824 he joined Sir Archibald Campbell with
that regiment in the invasion of the Burmese empire, and served throughout that war, from the
landing and capture of Rangoon to the Peace in Feb. 1826. During this period he was
employed in six separate commands against the enemy. In October 1824 he embarked with a
force from Rangoon to capture the province of Martaban: he stormed its strongly fortified town,
taking 32 pieces of heavy ordnance and other arms. On the 8th Feb. 1825, he captured the for¬
tified position of Tantabain, taking 36 pieces of Artillery, and other arms. He was also
present at every action with the enemy (except those in Dec. 1824, when he was still employed
at Martaban), particularly at Sembike on 1st Dec. 1825, when in command of the advanced
guard he carried the front face of the enemy’s position. He commanded the 1st Brigade of the
Madras division, and was twice thanked by the Governor-General in Council. He has received
the War Medal with one Clasp for Barrosa.
131 Major-General Robbins served in Sicily in 1806-7 with the 1st Brigade of Guards under
Sir John Moore. Subsequently with the 7th Hussars in the Peninsula and France in the
campaigns of 1813 and 14, including the investment and surrender of Pampcluna, the battles of
Orthes and Toulouse, with several intermediate affairs of outposts. Served also in Flanders
in 1815 with the 7th Hussars; was present at Quatre Bras, commanded a squadron of the
Rear Guard in the affair at Genappe, also at the battle of Waterloo where he was severely
wounded. He has received the W
T
ar Medal with two Clasps for Orthes and Toulouse.
132 Major-General Macneil served in Sir John Moore’s retreat, and subsequently at Wal-
cheren in 1809; in Swedish Pomerania in 1813, in Holland in 1814, including the attack on
Bergen-op-Zoom. Served also the campaign of 1815, including battle of Waterloo.
133 Major-General Pitt served at the capture of the Danish West India Islands in 1807; and
of Martinique in 1809. Served also in the Peninsula from Jan. 1811 to Jan. 1814, including
the battle of Albuhera ; actions at Usagre and Almaraz ; siege of Badajoz ; battles of Yittoria,
Pampeluna, and the Pyrenees. He has received the War Medal with four Clasps.
134 Major-General Sutherland commanded the few troops on the Gold Coast in the successful
operations and actions against the Ashantees, whom he defeated and dispersed (about 20,000
strong) in June and July 1824.
135 Major-General Rainey served with the 82nd at the siege and capture of Copenhagen in
1807; with Sir Brent Spencer’s expedition off the coast of Spain, and at Cadiz on surrender of
the French fleet; from thence joined Sir Arthur Wellesley’s army at Mondego Bay, and was
afterwards present at the battles of Roleia, Vimiera, and Corunna, also the retreat under Sir
John Moore. Accompanied the regiment to Walcheren in 1809, and was present at the sur¬
render of Middleburgh, siege and capture of Flushing. Joined the army in the Peninsula in
May 1812, and served as Aide-de-camp to Sir Thomas Bradford during the siege of the Forts of
Salamanca, battle of Salamanca, capture of Madrid, siege of Burgos, and retreat therefrom.
Served afterwards in the Portuguese service in advance through the Tras-os-Montes in 1813, at
the battle of Vittoria, actions of Villa Franca and Toloso, storm of the fortified convent in front
of San Sebastian, at both the sieges and storm of San Sebastian, passage of the Bidassoa, battle
of the Nivelle, battles of the Nive on the 9th and 10th Dec.—severely wounded: wounded also
at the siege of San Sebastian. Served in France with the Army of Occupation from the capi¬
tulation of Paris in 1815 to the end of 1818. He has received the War Medal with eight
Clasps.
136 Major-General the Honorable Charles Gore joined the 43rd in the Peninsula in July
1811, and was present and one of the storming party of Fort San Francisco at the investment
of Ciudad Rodrigo ; also at the siege and storming of that fortress and of Badajoz, battle of
Salamanca, as Aide-de-camp to Sir Andrew Barnard ; and in a similar capacity to Sir James
Kempt in the battles of Vittoria, the Nivelle, the Nive (9th, 10th, and 11th Dec.), Orthes, and
Toulouse. He was also in the action of San Milan, capture of Madrid, storming of the heights
of Vera, bridge of Yanzi, and all the skirmishes of the L'ght Division from 1812 to the close
of the war in 1814 ; after which he accompanied Sir James Kempt with the troops sent to
Canada under his command ; returned to Europe in time for the campaign of 1815, and was
first and principal Aide-de-camp to Sir James Kempt, and present at the battles of Quatre Bras
(horse shot), and Waterloo (three horses shot), and capture of Paris. He has received the War
Medal with nine Clasps.
137 Major-General Walton served with the Coldstream Guards at the siege and capture of
Copenhagen in 1807. He embarked for the Peninsula in 1808, and served the campaigns of
1809, 1810, and the first part of 1811; and was present at the passage of the Douro and cap¬
ture of Oporto, the battles of Talavera and Busaco, the retreat to the Lines of Torres Vedras,
and the subsequent advance to the Spanish frontier. He served also in Holland, Belgium, and
France, from Nov. 1813 to Nov. 1818; and was present at the bombardment of Antwerp, the