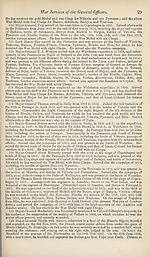 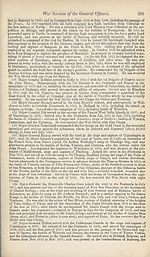 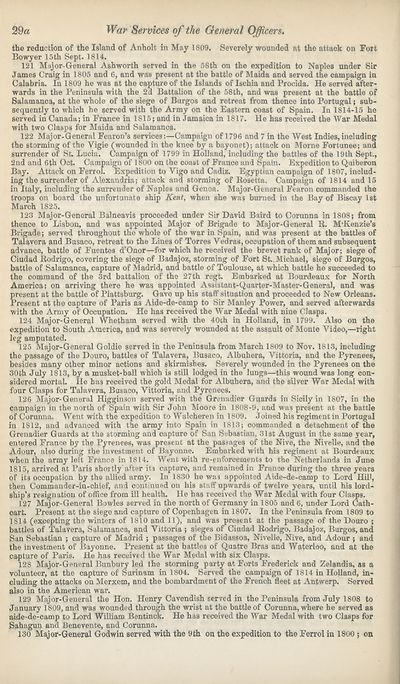 29a War Services of the General Officers.
the reduction of the Island of Anholt in May 1809. Severely wounded at the attack on Fort
Bowyer 15th Sept. 1814.
121 Major-General Ashworth served in the 58th on the expedition to Naples under Sir
James Craig in 1805 and 6, and was present at the battle of Maida and served the campaign in
Calabria. In 1809 he was at the capture of the Islands of Ischia and Procida. He served after¬
wards in the Peninsula with the 2d Battalion of the 58th, and was present at the battle of
Salamanca, at the whole of the siege of Burgos and retreat from thence into Portugal; sub¬
sequently to which he served with the Army on the Eastern coast of Spain. In 1814-15 he
served in Canada; in France in 1815; and in Jamaica in 1817. He has received the War Medal
with two Clasps for Maida and Salamanca.
122 Major-General Fearon’s services:—Campaign of 1796 and 7 in the West Indies,including
the storming of the Vigie (wounded in the knee by a bayonet); attack on Morne Fortunee; and
surrender of St. Lucia. Campaign of 1799 in Holland, including the battles of the 19th Sept.,
2nd and 6th Oct. Campaign of 1800 on the coast of France and Spain. Expedition to Quiberon
Bay. Attack on Ferrol. Expedition to Vigo and Cadiz. Egyptian campaign of 1807, includ¬
ing the surrender of Alexandria; attack and storming of Rosetta. Campaign of 1814 and 15
in Italy, including the surrender of Naples and Genoa. Major-General Fearon commanded the
troops on board the unfortunate ship Kent, when she was burned in the Bay of Biscay 1st
March 1825.
123 Major-General Balneavis proceeded under Sir David Baird to Corunna in 1808; from
thence to Lisbon, and was appointed Major of Brigade to Major-General R. M'Kenzie’s
Brigade; served throughout the whole of the war in Spain, and was present at the battles of
Talavera and Busaco, retreat to the Lines of Torres Vedras, occupation of them and subsequent
advance, battle of Fuentes d’Onor—for which he received the brevet rank of Major; siege of
Ciudad Rodrigo, covering the siege of Badajoz, storming of Fort St. Michael, siege of Burgos,
battle of Salamanca, capture of Madrid, and battle of Toulouse, at which battle he succeeded to
the command of the 3rd battalion of the 27th regt. Embarked at Bourdeaux for North
America; on arriving there he was appointed Assistant-Quarter-Master-General, and was
present at the battle of Piattsburg. Gave up his staff situation and proceeded to New Orleans.
Present at the capture of Paris as Aide-de-camp to Sir Manley Power, and served afterwards
with the Army of Occupation. He has received the War Medal with nine Clasps.
124 Major-General Whetham served with the 40th in Holland, in 1799. Also on the
expedition to South America, and was severely wounded at the assault of Monte Video,—right
leg amputated.
125 Major-General Goldie served in the Peninsula from March 1809 to Nov. 1813, including
the passage of the Douro, battles of Talavera, Busaco, Albuhera, Vittoria, and the Pyrenees,
besides many other minor actions and skirmishes. Severely wounded in the Pyrenees on the
30th July 1813, by a musket-ball which is still lodged in the lungs—this wound was long con¬
sidered mortal. He has received the gold Medal for Albuhera, and the silver War Medal with
four Clasps for Talavera, Busaco, Vittoria, and Pyrenees.
126 Major-General Higginson served with the Grenadier Guards in Sicily in 1807, in the
campaign in the north of Spain with Sir John Moore in 1808-9, and was present at the battle
of Corunna. Went with the expedition to Walcheren in 1809. Joined his regiment in Portugal
in 1812, and advanced with the army into Spain in 1813; commanded a detachment of the
Grenadier Guards at the storming and capture of San Sebastian, 31st August in the same year,
eutered France by the Pyrenees, was present at the passages of the Nive, the Nivelle, and the
Adour, also during the investment of Bayonne. Embarked with his regiment at Bourdeaux
when the army left France in 1814. Went with re-enforcements to the Netherlands in June
1815, arrived at Paris shortly after its capture, and remained in France during the three years
of its occupation by the allied army'. In 1830 he was appointed Aide-de-camp to Lord Hill,
then Commander-in-chief, and continued on his staff upwards of twelve years, until his lord¬
ship’s resignation of office from ill health. He has received the War Medal with four Clasps.
127 Major-General Bowles served in the north of Germany in 1805 and 6, under Lord Cath-
cart. Present at the siege aud capture of Copenhagen in 1807. In the Peninsula from 1809 to
1814 (excepting the winters of 1810 and 11), and was present at the passage of the Douro ;
battles of Talavera, Salamanca, and Vittoria ; sieges of Ciudad Rodrigo, Badajoz, Burgos, and
San Sebastian ; capture of Madrid ; passages of the Bidassoa, Nivelle, Nive, and Adour ; and
the investment of Bayonne. Present at the battles of Quatre Bras and Waterloo, and at the
capture of Paris. He has received the War Medal with six Clasps.
128 Major-General Bunbury led the storming party at Forts Frederick and Zelandia, as a
volunteer, at the capture of Surinam in 1804. Served the campaign of 1814 in Holland, in¬
cluding the attacks on Merxem, and the bombardment of the French fleet at Antwerp. Served
also in the American war.
129 Major-General the Hon. Henry Cavendish served in the Peninsula from July 1808 to
January 1809, and was wounded through the wrist at the battle of Corunna, where he served as
aide-de-camp to Lord William Bentinck. He has received the War Medal with two Clasps for
Sahagun and Benevente, and Corunna.
130 Major-General Godwin served with the 9th on the expedition to the Ferrol in 1800 ; on