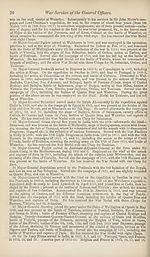 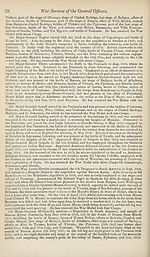 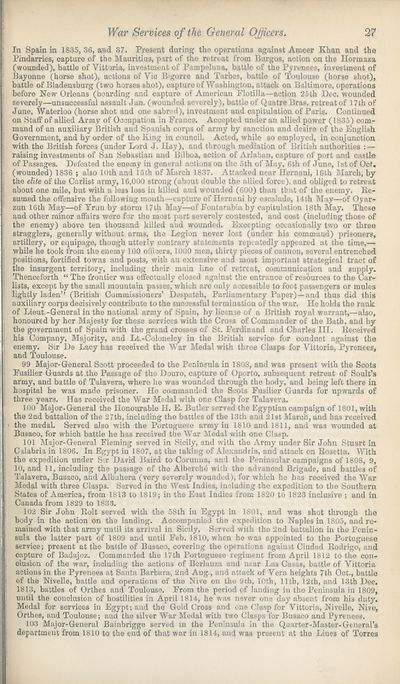 27
War Services of the General Officers.
In Spain in 1835, 36, and 37. Present during the operations against Ameer Khan and the
Pindarries, capture of the Mauritius, part of the retreat from Burgos, action on the Hormaza
(wounded), battle of Vittoria, investment of Pampeluna, battle of the Pyrenees, investment of
Bayonne (horse shot), actions of Vic Bigorre and Tarbes, battle of Toulouse (horse shot),
battle of Bladensburg (two horses shot), capture of Washington, attack on Baltimore, operations
before New Orleans (boarding and capture of American Flotilla—action 25 th Dec. wounded
severely—unsuccessful assault Jan. (wounded severely), battle of Quatre Bras, retreatof 17th of
June, Waterloo (horse shot and one sabred), investment and capitulation of Paris. Continued
on Stalf of allied Army of Occupation in France. Accepted under an allied power (1835) com¬
mand of an auxiliary British and Spanish corps of army by sanction and desire of the English
Government, and by order of the King in council. Acted, while so employed, in conjunction
with the British forces (under Lord J. Hay), and through mediation of British authorities : —
raising investments of San Sebastian and Bilboa, action of Arlaban, capture of port and castle
of Passages. Defeated the enemy in general actions on the 5th of May, 6th of June, 1st of Oct.
(wounded) 1836 ; also 10th and 15ch of March 1837. Attacked near Hernani, 16th March, by
the elite of the Carlist army, 16,000 strong (about double the allied force), and obliged to retreat
about one mile, but with a less loss in killed and wounded (600) than that of the enemy. Re¬
sumed the offensive the following month—capture of Hernani by escalade, 14th May—of Oyar-
zun 16th May—of Yrun by storm 17th May—of Fontarabia by capitulation 18th May. These
and other minor affairs were for the most part severely contested, and cost (including those of
the enemy) above ten thousand killed and wounded. Excepting occasionally two or three
stragglers, generally without arms, the Legion never lost (under his command) prisoners,
artillery, or equipage, though utterly contrary statements repeatedly appeared at the time,—
while he took from the enemy 100 officers, 1000 men, thirty pieces of cannon, several entrenched
positions, fortified towns and posts, with an extensive and most important strategical tract of
the insurgent territory, including their main line of retreat, communication and supply.
Thenceforth “ The frontier was effectually closed against the entrance of resources to the Car-
lists, except by the small mountain passes, which are only accessible to foot passengers or mules
lightly laden’’ (British Commissioners’ Despatch, Parliamentary Paper)—and thus did this
auxiliary corps decisively contribute to the successful termination of the war. He holds the rank
of Lieut.-General in the national army of Spain, by license of a British royal warrant,—also,
honoured by her Majesty for these services with the Cross of Commander of the Bath, and by
the government of Spain with the grand crosses of St. Ferdinand and Charles III. Received
his Company, Majority, and Lt.-Colonelcy in the British service for conduct against the
enemy. Sir De Lacy has received the War Medal with three Clasps for Vittoria, Pyrenees,
and Toulouse.
99 Major-General Scott proceeded to the Peninsula in 1808, and was present with the Scots
Fusilier Guards at the Passage of the Douro, capture of Oporto, subsequent retreat of Soult’s
army, and battle of Talavera, where he was wounded through the body, and being left there in
hospital he was made prisoner. He commanded the Scots Fusilier Guards for upwards of
three years. Has received the War Medal with one Clasp for Talavera.
100 Major-General the Honourable H. E. Butler served the Egyptian campaign of 1801, with
the 2nd battalion of the 27th, including the battles of the 13th and 21st March, and has received
the medal. Served also with the Portuguese army in 1810 and 1811, and was wounded at
Busaco, for which battle he has received the War Medal with one Clasp.
101 Major-General Fleming served in Sicily, and with the Army under Sir John Stuart in
Calabria in 1806. In Egypt in 1807, at the taking of Alexandria, and attack on Rosetta. With
the expedition under Sir David Baird to Corunna, and the Peninsular campaigns of 1808, 9,
10, and 11, including the passage of the Alberche with the advanced Brigade, and battles of
Talavera, Busaco, and Albahera (very severely wounded), for which he has received the War
Medal with three Clasps. Served in the West Indies, including the expedition to the Southern
States of America, from 1813 to 1819; in the East Indies from 1820 to 1823 inclusive ; and in
Canada from 1829 to 1833.
102 Sir John Rolt served with the 58th in Egypt in 1801, and was shot through the
body in the action on the landing. Accompanied the expedition to Naples in 1805, and re¬
mained with that army until its arrival in Sicily, Served with the 2nd battalion in the Penin¬
sula the latter part of 1809 and until Feb. 1810, when he was appointed to the Portuguese
service; present at the battle of Busaco, covering the operations against Ciudad Rodrigo, and
capture of Badajoz. Commanded the 17th Portuguese regiment from April 1812 to the con¬
clusion of the war, including the actions of Berlanza ami near Las Casas, battle of Vittoria
actions in the Pyrenees at Santa Barbara, 2nd Aug., and attack of Vera heights 7th Oct., battle
of the Nivelle, battle and operations of the Nive on the 9th, 10th, lltb, 12th, and 13th Dec.
1813, battles of Orthes and Toulouse. From the period of landing in the Peninsula in 1809,
until the conclusion of hostilities in April 1814, he was never one day absent from his duty.
Medal for services in Egypt; and the Gold Cross and one Clasp for Vittoria, Nivelle, Nive,
Orthes, and Toulouse; and the silver War Medal with two Clasps for Busaco and Pyrenees.
103 Major-General Bainbrigge served in the Peninsula in the Quarter-Master-General’s
department from 1810 to the end of that war in 1814, and was present at the Lines of Torres