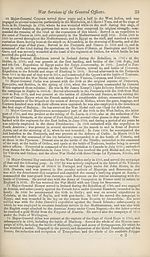 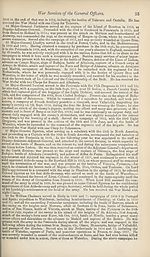 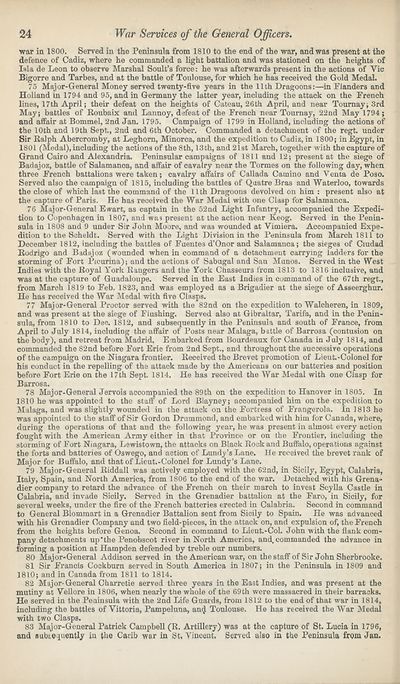 24
War Services of the General Officers.
war in 1800. Served in the Peninsula from 1810 to the end of the war, and was present at the
defence of Cadiz, where he commanded a light battalion and was stationed on the heights of
Isla de Leon to observe Marshal Soult’s force: he was afterwards present in the actions of Vic
Bigorre and Tarbes, and at the battle of Toulouse, for which he has received the Gold Medal.
75 Major-General Money served twenty-five years in the 11th Dragoons:—in Flanders and
Holland in 1794 and 95, and in Germany the latter year, including the attack on the French
lines, 17th April; their defeat on the heights of Gateau, 26th April, and near Tournay; 3rd
May; battles of Roubaix and Lannoy, defeat of the French near Tournay, 22nd May 1794;
and affair at Bommel, 2nd Jan. 1795. Campaign of 1799 in Holland, including the actions of
the 10th and 19th Sept., 2nd and 6th October. Commanded a detachment of the regt. under
Sir Ralph Abercromby, at Leghorn, Minorca, and the expedition to Cadiz, in 1800; in Egypt, in
1801 (Medal), including the actions of the 8th, 13 th, and 21st March, together with the capture of
Grand Cairo and Alexandria. Peninsular campaigns of 1811 and 12; present at the siege of
Badajoz, battle of Salamanca, and affair of cavalry near the Tormes on the following day, when
three French battalions were taken; cavalry affairs of Callada Camino and Venta de Poso.
Served also the campaign of 1815, including the battles of Quatre Bras and Waterloo, towards
the close of which last the command of the 11th Dragoons devolved on him : present also at
the capture of Paris. He has received the War Medal with one Clasp for Salamanca.
76 Major-General Ewart, as captain in the 52nd Light Infantry, accompanied the Expedi¬
tion to Copenhagen in 1807, and was present at the action near Keog. Served in the Penin¬
sula in 1808 and 9 under Sir John Moore, and was wounded at Vimiera. Accompanied Expe¬
dition to the Scheldt. Served with the Light Division in the Peninsula from March 1811 to
December 1812, including the battles of Fuentes d’Onor and Salamanca; the sieges of Ciudad
Rodrigo and Badajoz (wounded when in command of a detachment carrying ladders for the
storming of Fort Picurina); and the actions of Sabugal and San Munos. Served in the West
Indies with the Royal York Rangers and the York Chasseurs from 1813 to 1816 inclusive, and
was at the capture of Guadaloupe. Served in the East Indies in command of the 67th regt.,
from March 1819 to Feb. 1823, and was employed as a Brigadier at the siege of Asseerghur.
He has received the War Medal with five Clasps.
77 Major-General Proctor served with the 82nd on the expedition to Walcheren, in 1809,
and was present at the siege of Flushing. Served also at Gibraltar, Tarifa, and in the Penin¬
sula, from 1810 to Dee. 1812, and subsequently in the Peninsula and south of France, from
April to July 1814, including the affair of Posts near Malaga, battle of Barrosa (contusion on
the body), and retreat from Madrid, Embarked from Bourdeaux for Canada in July 1814, and
commanded the 82nd before Fort Erie from 2nd Sept., and throughout the successive operations
of the campaign on the Niagara frontier. Received the Brevet promotion of Lieut.-Colonel for
his conduct in the repelling of the attack made by the Americans on our batteries and position
before Fort Erie on the 17th Sept. 1814. He has received the War Medal with one Clasp for
Barrosa.
78 Major-General Jervois accompanied the 89th on the expedition to Hanover in 1805. In
1810 he was appointed to the staff of Lord Blayney; accompanied him on the expedition to
Malaga, and was slightly wounded in the attack on the Fortress of Frangerola. In 1813 he
was appointed to the staff of Sir Gordon Drummond, and embarked with him for Canada, where,
during the operations of that and the following year, he was present in almost every action
fought with the American Army either in that Province or on the Frontier, including the
storming of Fort Niagara, Lewistown, the attacks on Black Rock and Buffalo, operations against
the forts and batteries of Oswego, and action of Lundy’s Lane. He received the brevet rank of
Major for Buffalo, and that of Lieut.-Colonel for Lundy’s Lane.
79 Major-General Riddall was actively employed with the 62nd, in Sicily, Egypt, Calabria,
Italy, Spain, and North America, from 1806 to the end of the war. Detached with his Grena«
dier company to retard the advance of the French on their march to invest Scylla Castle in
Calabria, and invade Sicily. Served in the Grenadier battalion at the Faro, in Sicily, for
several weeks, under the fire of the French batteries erected in Calabria. Second in command
to General Blommart in a Grenadier Battalion sent from Sicily to Spain. He was advanced
with his Grenadier Company and two field-pieces, in the attack on, and expulsion of, the French
from the heights before Genoa. Second in command to Lieut.-Col. John with the flank com¬
pany detachments up'the Penobscot river in North America, and. commanded the advance in
forming a position at Hampden defended by treble our numbers.
80 Major-General Addison served in the American war, on the staff of Sir John Sherbrooke.
81 Sir Francis Cockburn served in South America in 1807; in the Peninsula in 1809 and
1810; and in Canada from 1811 to 1814.
82 Major-General Charretie served three years in the East Indies, and was present at the
mutiny at Vellore in 1806, when nearly the whole of the 69 th were massacred in their barracks.
He served in the Peninsula with the 2nd Life Guards, from 1812 to the end of that war in 1814,
including the battles of Vittoria, Pampeluna, and Toulouse. He has received the War Medal
with two Clasps.
83 Major-General Patrick Campbell (R. Artillery) was at the capture of St. Lucia in 1796,
and subsequently in the Carib war in St, Vincent. Served also in the Peninsula from Jan.