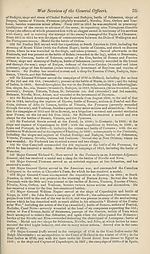 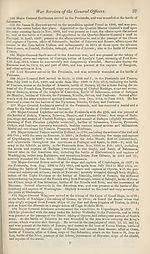 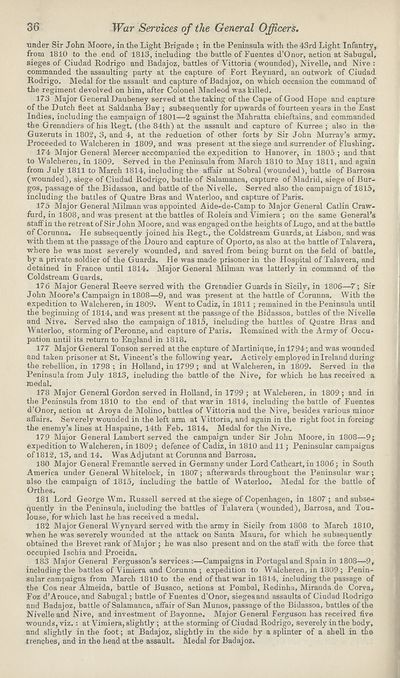 36 War Services of the General Officers.
under Sir John Moore, in the Light Brigade ; in the Peninsula with the 43rd Light Infantry,
from 1810 to the end of 1813, including the battle of Fuentes d'Onor, action at Sabugal,
sieges of Ciudad Rodrigo and Badajoz, battles of Vittoria (wounded), Nivelle, and Nive :
commanded the assaulting party at the capture of Fort Reynard, an outwork of Ciudad
Rodrigo. Medal for the assault and capture of Badajoz, on which occasion the command of
the regiment devolved on him, after Colonel Macleod was killed.
173 Major General Daubeney served at the taking of the Cape of Good Hope and capture
of the Dutcli fleet at Saldanha Bay ; subsequently for upwards of fourteen years in the East
Indies, including the campaign of 1801—2 against the Mahratta chieftains, and commanded
the Grenadiers of his Regt. (the 84th) at the assault and capture of Kurree ; also in the
Guzeruts in 1802, 3, and 4, at the reduction of other forts by Sir John Murray's army.
Proceeded to Walcheren in 1809, and was present at tlie siege and surrender of Flushing.
174 Major General Mercer accompanied the expedition to Hanover, in 1805 ; and that
to VValcheren, in 1809. Served in the Peninsula from March 1810 to May 1811, and again
from July 1811 to March 1814, including the affair at Sobral (wounded), battle of Barrosa
(wounded), siege of Ciudad Rodrigo, battle of Salamanca, capture of Madrid, siege of Bur¬
gos, passage of the Bidassoa, and battle of the Nivelle. Served also the campaign of 1815,
including the battles of Quatre Bras and Waterloo, and capture of Paris.
175 Major General Milman was appointed Aide-de-Camp to Major General Catlin Craw-
furd, in 1808, and was present at the battles of Roleia and Vimiera ; on the same General's
staff in the retreat of Sir John Moore, and was engaged on the heights of Lugo, and at the battle
of Corunna. He subsequently joined his Regt., the Coldstream Guards, at Lisbon, and was
■with them at the passage of the JJouro and capture of Oporto, as also at the battle of Talavera,
where he was most severely wounded, and saved from being burnt on the field of battle,
by a private soldier of the Guards. He was made prisoner in the Hospital of Talavera, and
detained in France until 1814. Major General Milman was latterly in command of the
Coldstream Guards.
176 Major General Reeve served with the Grenadier Guards in Sicilv, in 1806—7; Sir
John Moore's Campaign in 1808—9, and was present at the battle of Corunna. With the
expedition to Walcheren, in 1809. Went to Cadiz, in 1811 ; remained in the Peninsula until
the beginning of 1814, and was present at the passage of the Bidassoa, battles of the Nivelle
and Nive. Served also the campaign of 1815, including the battles of Quatre Bras and
Waterloo, storming of Peronne, and capture of Paris. Remained -with the Army of Occu¬
pation until its return to England in 1818.
177 Major General Tonson served at the capture of Martinique, in 1794; and was wounded
and taken ])risoner at St. Vincent's the following year. Actively employed in Ireland during
the rebellion, in 1798 ; in Holland, in 1799 ; and at Walcheren, in 1809. Served in the
Peninsula from July 1813, including the battle of the Nive, for which he has received a
medal.
178 Major General Gordon served in Holland, in 1799 ; at Walcheren, in 1809 ; and in
the Peninsula from 1810 to the end of that war in 1814, including the battle of Fuentes
d'Onor, action at Aroya de Molino, battles of Vittoria aud the Nive, besides various minor
affairs. Severely wounded in the left arm at Vittoria, and again in the right foot in forcing
the enemy's lines at Haspaine, 14th Feb. 1814. Medal for the Nive.
179 Major General Lambert served the campaign under Sir John Moore, in 1808—9;
expedition to Walcheren, in 1809 ; defence of Cadiz, in 1810 and 11; Peninsular campaigns
of 1812, 13, and 14. Was Adjutant at Corunna and Barrosa.
180 Major General Fremantle served in Germany under Lord Cathcart, in 1806 ; in South
America under General Whitelock, in 1807; afterwards throughout the Peninsular war;
also the campaign of 1815, including the battle of Waterloo. Medal for the battle of
Orthes.
181 Lord George Wm. Russell served at the siege of Copenhagen, in 1807 ; and subse¬
quently in the Peninsula, including the battles of Talavera (wounded), Barrosa, and Tou¬
louse, for which last he has received a medal.
182 Major General Wynyard served with the army in Sicily from 1808 to March 1810,
when he was severely wounded at the attack on Santa Maura, for which he subsequently
obtained the Brevet rank of Major ; he was also present and on the staff with the force that
occupied Iscliia and Procida.
183 Major General Fergusson's services :—Campaigns in Portugal and Spain in 1808—9,
including the battles of Vimiera and Corunna ; expedition to Walcheren, in 1809 ; Penin¬
sular campaigns from March 1810 to the end of that war in 1814, including the passage of
the Coa near Almeida, battle of Busaco, actions at Pombal, Redinha, Miranda de Corva,
Foz d'Arouce, and Sabugal; battle of Fuentes d'Onor, sieges and assaults of Ciudad Rodrigo
and Badajoz, battle of Salamanca, affair of San Munos, passage of the Bidassoa, battles of the
Nivelle and Nive, and investment of Bayonne. Major General Ferguson has received five
wounds, viz. : at Vimiera, slightly ; at the storming of Ciudad Rodrigo, severely in the body,
and slightly in the foot; at Badajoz, slightly in the side by a splinter of a shell in the
trenches, and in the head at the assault. Medal for Badajoz.