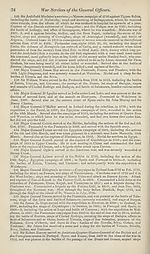 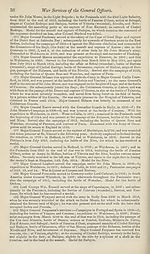 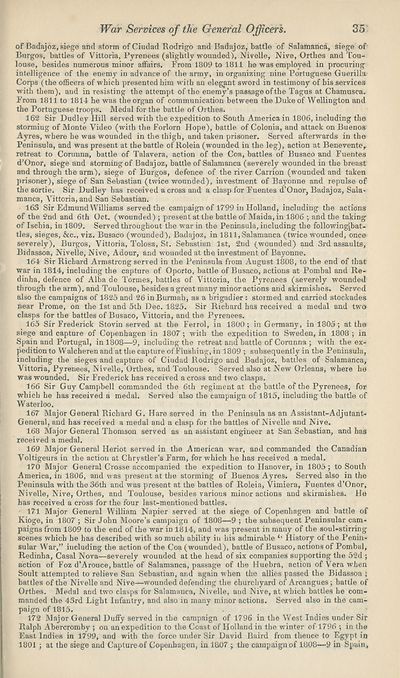 War Services of the General Officers. 35
of Badajoz.siego and storm of Ciudad Rodrigo and Badajoz, battle of Salamanca, siege of
Burgos, battles of Vittoria, Pyrenees (slightly wounded), Nivelie, Nive, Orthes and 'I'ou-
louse, besides numerous minor aifairs. From 1809 to 1811 he was employed in procuring
intelligence of the enemy in advance of the army, in organizing nine Portuguese Guerilla
Corps (the officers of which presented him with an elegant sword in testimony of his services
w-ith them), and in resisting the attempt of the enemy's passageofthe Tagus at Chamusca.
From 1811 to 1814 he was the organ of communication between the Duke of Wellington and
the Portuguese troops. Medal for the battle of Orthes.
162 Sir Dudley Hill served with the expedition to South America in 1806, including the
storming of Monte Video (with the Forlorn Hope), battle of Colonia, and attack on Buenos
Ayres, where he was wounded in the thigh, and taken prisoner. Served afterwards in the
Peninsula, and was present at the battle of Roleia (wounded in the leg), action at Benevente,
retreat to Coniima, battle of Talavera, action of the Coa, battles of Busaco and Fuentes
d'Onor, siege and storming of Badajoz, battle of Salamanca (severely wounded in the breast
and through the arm), siege of Burgos, defence of the river Carrion (wounded and taken
prisoner), siege of San Sebastian (twice wounded), investment of Bayonne and repulse of
the sortie. Sir Dudley has received across and a clasp for i'uentes d'Onor, Badajoz, Sala¬
manca, Vittoria, and San Sebastian.
163 Sir Edmund Williams served the campaign of 1799 iu Holland, including the actions
of the 2nd and 6th Oct. (wounded); present at the battle of Maida, in 1806 ; and the taking
of Ischia, in 1809. Served throughout the war in the Peninsula, including the followingibat-
tles, sieges, &c., viz. Busaco (wounded), Badajoz, in 1811, Salamanca (twice wounded, once
severely), Burgos, Vittoria, Tolosa, St. Sebastian 1st, 2nd (wounded) and 3rd assaults,
Bidassoa, Nivelle, Nive, Adour, and wounded at the investment of Bayonne.
164 Sir Richard Armstrong served in the Peninsula from August 1808, to the end of that
war in 1814, including the capture of Oporto, battle of Busaco, actions at Pombal and Re-
dinha, defence of Alba de Tornies, battles of Vittoria, the Pyrenees (severely wounded
through the arm), and Toulouse, besides a great many minor actions and skirmishes. Served
also the campaigns of 1825 and 26 inBurmab, as a brigadier : stormed and carried stockades
near Prome, on the 1st and 5th Dec. 1825. Sir Richard has received a medal and two
clasps for the battles of Busaco, Vittoria, and the Pyrenees.
165 Sir Frederick Stovin served at the Ferrol, in 1800; in Germany, in 1805; at the
siege and capture of Cojienhagen in 1807; with the expedition to Sweden, in 1808; in
Spain and Portugal, in 1800—9, including the retreat and battle of Corunna ; with the ex¬
pedition to Walcheren and at the capture of Flushing, in 1809 ; subsequently in the Peninsula,
including the sieges and capture of Ciudad Rodrigo and Badajoz, battles of Salamanca,
Vittoria, Pyrenees, Nivelle, Orthes, and Toulouse. Served also at New Orleans, where he
was wounded. Sir Frederick has received a cross and two clasps.
166 Sir Guy Campbell commanded the 6th regiment at the battle of the Pyrenees, for
which he has received a medal. Served also the campaign of I8l5, including the battle of
Waterloo.
167 Major General Richard G. Hare served in the Peninsula as an Assistant-Adjutant-
General, and has received a medal and a clasp for ihe battles of Nivelle and Nive.
168 Major General Thomson served as an assistant engineer at San Sebastian, and has
received a medal.
169 Major General Heriot served in the American war, and commanded the Canadian
Voltigeurs in the action at Chrystler's Farm, for which he has received a medal.
170 Major General Crosse accompanied the expedition to Hanover, in 1805 ; to South
America, in 1806, and was present at the storming of Buenos Ayres. Served also in the
Peninsula with the 36th and was present at the battles of Roleia, Vimiera, Fuentes d'Onor,
Nivelle, Nive, Orthes, and Toulouse, besides various minor actions and skirmishes. He
has received a cross for the four last-mentioned battles.
171 Major General William Napier served at the siege of Copenhagen and battle of
Kioge, in 1807 ; Sir John Moore's campaign of 1808—9 ; the subsequent Peninsular cam¬
paigns from 1809 to the end of the war in 1814, and was present in many of the soul-stirring
scenes which he has described with so much ability in his admirable '' History of the Penin¬
sular War," including the action of the Coa (wounded), battle of Busaco, actions of Pombal,
Redinha, Casal Nova—severely wounded at the head of six companies supporting the 52d ;
action of Foz d'Arouce, battle of Salamanca, passage of the Huebra, action of Vera when
Soult attempted to relieve San Sebastian, and again when the allies passed the Bidassoa ;
battles of the Nivelle and Nive—wounded defending the churcliyard of Arcangues; battle of
Orthes. Medal and two clasps for Salamanca, Nivelle, and Nive, at which battles he com¬
manded the 43rd Light Infantry, and also in many minor actions. Served also in the cam¬
paign of 1815.
172 Major General Duffy served in the campaign of 1796 in the West Indies under Sir
Ralph Abercromby ; on an expedition to the Coast of Holland in the winter of 1796 ; in the
East Indies in 1799, and with the force under Sir David Baird from thence to Egypt in
1801 ; at the siege and Capture of Copenhagen, in 1807 ; the campaign of 1808—9 in Spain,