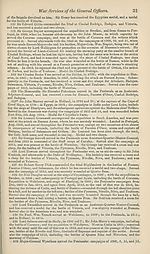 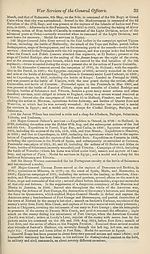 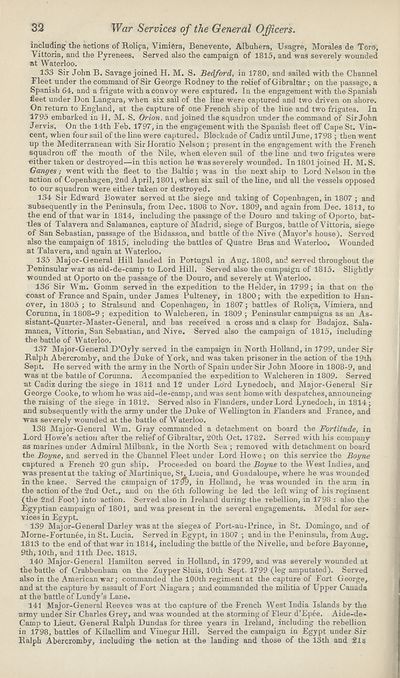 32 War Services of the General Officers.
including the actions of Roliya, Vimiera, Benevente, Albuhera, Usagre, Morales de Toro,
Vittoria, and the Pyrenees. Served also the campaign of 1815, and vras severely wounded
at Waterloo.
133 Sir John B. Savage joined H. M. S. Bedford, in 1780, and sailed with the Channel
Fleet under the command of Sir George Rodney to the relief of Gibraltar ; on the passage, a
Spanish 64, and a frigate with a convoy were captured. In the engagement with the Spanish
fleet under Don Langara, when six sail of the line were captured and two driven on shore.
On return to England, at the capture of one French ship of the line and two frigates. In
1795 embarked in II. M. S. Orion, and joined the squadron under tlie command of Sir John
Jervis. On the 14th Feb. 1797, in the engagement with the Spanish fleet off Cape St. Vin¬
cent, when four sail of the line were captured. Blockade of Cadiz until June, 1798 ; then went
up the Mediterranean with Sir Horatio Nelson ; present in the engagement with the French
squadron off the mouth of the Nile, when eleven sail of the line and two frigates were
either taken or destroyed—in this action he was severely wounded. In 1801 joined H. M.S.
Ganges; went with the fleet to the Baltic; was in the next ship to Lord Nelson in the
action of Copenhagen, 2nd April, 1801, when six sail of the line, and all the vessels opposed
to our squadron were either taken or destroyed.
134 Sir Edward Bowater served at the siege and taking of Copenhagen, in 1807; and
subsequently in the Peninsula, from Dec. 1808 to Nov. 1809, and again from Dec. 1811, to
the end of that war in 1814, including the passage of the Douro and taking of Oporto, bat¬
tles of Talavera and Salamanca, capture of Madrid, siege of Burgos, battle of Vittoria, siege
of San Sebastian, passage of the Bidassoa, and battle of the Nive (Mayor's house). Served
also the campaign of 1815, including the battles of Quatre Bras and Waterloo. Wounded
at Talavera, and again at Waterloo.
135 Major-General Hill landed in Portugal in Aug. 1808, and served throughout the
Peninsular war as aid-de-camp to Lord Hill. Served also the campaign of 1815. Slightly
wounded at Oporto on the passage of the Douro, and severely at VVaterloo.
136 Sir Wm. Gomm served in the expedition to the Helder, in 1799; in that on the
coast of France and Spain, under James Pulteney, in 1800; with the expedition to Han¬
over, in 1805 ; to Stralsund and Copenhagen, in 1807; battles of Rolifa, Vimiera, and
Corunna, in 1808-9 ; expedition to Walcheren, in 1809 ; Peninsular campaigns as an As¬
sistant-Quarter-Master-General, and has received a cross and a clasp for Badajoz, Sala¬
manca, Vittoria, San Sebastian, and Nive. Served also the campaign of 1815, including
the battle of Waterloo.
137 Major-General D'Oyly served in the campaign in North Holland, in 1799, under Sir
Ralph Abercromby, and the Duke of York, and was taken prisoner in the action of the 19tb
Sept. He served with the army in the North of Spain under Sir John Moore in 1808-9, and
was at the battle of Corunna. Accompanied the expedition to Walcheren in 1809. Served
at Cadiz during the siege in 1811 and 12 under Lord Lynedoch, and Major-General Sir
George Cooke, to whom he was aid-de-camp, and was sent home with despatches, announcing
the raising of the siege in 18la!. Served also in Flanders, under Lord Lynedoch, in 1814;
and subsequently with the army under the Duke of Wellington in Flanders and France, and
■was severely wounded at the battle of Waterloo.
138 Major-General Wni. Gray commanded a detachment on board the Fortitude, in
Lord Howe's action after the relief of Gibraltar, '20th Oct. 1782. Served with his company
as marines under Admiral Milbank, in the North Sea ; removed with detachment on board
the Bo7/ne, and served in the Channel Fleet under Lord Howe; on this service the Boijne
captured a French 20 gun ship. Proceeded on board the Boyne to the ^Vest Indies, and
was presentat the taking of Martinique, St. Lucia, and Guadaloupe, where he was wounded
in the knee. Served the campaign of 1799, in Holland, he was wounded in the arm in
the action of the 2nd Oct., and on the 6th following he led the left wing of his regiment
(the 2nd Foot) into action. Served also in Ireland during the rebellion, in 1798 : also the
Egyptian campaign of 1801, and was present in the several engagements. Medal for ser¬
vices in Egypt.
139 Major-General Darley was at the sieges of Port-au-Prince, in St. Domingo, and of
Morne-Fortunee, in St. Lucia. Served in Egypt, in 1807 ; and in the Peninsula, from Aug.
1813 to the end of that war in 1814, including the battle of the Nivelle, and before Bayonne,
9th, 10th, and 11th Dec. 1813.
140 Major-General Hamilton served in Holland, in 1799, and was severely wounded at
the battle of Crabbenham on the Zuyper Sluis, 10th Sept. 1799 (leg amputated). Served
also in the American war; commanded the 100th regiment at the capture of Fort George,
and at the capture by assault of Fort Niagara ; and commanded the militia of Upper Canada
at the battle of Lundy's Lane.
141 Major-General Reeves was at the capture of the French West India Islands by the
army under Sir Charles Grey, and was wounded at the storming of Fleur d'Epfe. Aide-de-
Camp to Lieut. General Ralph Dundas for three years in Ireland, including the rebellion
in 1798, battles of KilacUim and Vinegar Hill. Served the campaign in Egypt under Sir
Ralph Abercromby, including the action at the landing and those of the loth and 21s