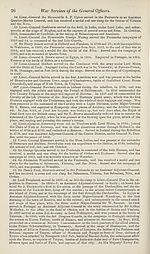 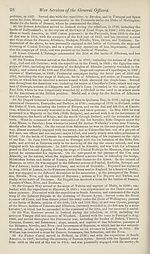 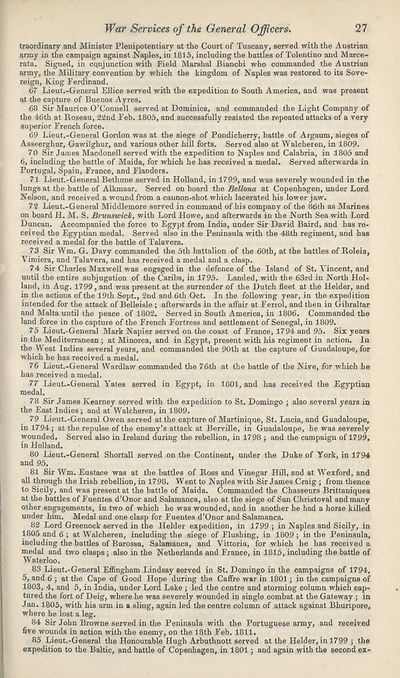 War Services of the General Officers^ 27
traordinary and Minister Plenipotentiary at the Court of Tuscany, served with the Austrian
army in the campaign against Naples, in 1815, including the battles of Tolentino and Marce-
rata. Signed, in cqnjunction with Field Marshal Bianchi who commanded the Austrian
army, the Military convention by which the kingdom of Naples was restored to its Sove¬
reign, King Ferdinand.
67 Lieut.-General Ellice served with the expedition to South America, and was present
at the capture of Buenos Ayres.
68 Sir Maurice O'Connell served at Dominica, and commanded the Light Company of
the 46th at Iloseau, 2i2nd Feb. 1805, and successfully resisted the repeated attacks of a very
superior French force.
69 Lieut.-General Gordon was at the siege of Pondicherry, battle of Argaum, sieges of
Asseerghur, Gawilghur, and various other hill forts. Served also at Walcheren, in 1809.
70 Sir James Macdonell served with the expedition to Naples and Calabria, in 1805 and
6, including the battle of Maida, for which he has received a medal. Served afterwards in
Portugal, Spain, France, and Flanders.
71 Lieut.-General Bethune served in Holland, in 1799, and was severely wounded in the
lungs at the battle of Alkmaar. Served on board the Bellona at Copenhagen, under Lord
Nelson, and received a wound from a cannon-shot which lacerated his lower jaw.
72 Lieut.-General Middlemore served in command of his company of the 86th as Marines
on board H. M. S. Brunswick, with Lord Howe, and afterwards in the North Sea with Lord
Duncan. Accompanied the force to Egypt from India, under Sir David Baird, and has re¬
ceived the Egyptian medal. Served also in the Peninsula with the 48th regiment, and has
received a medal for the battle of Talavera.
73 Sir Wm. G. Davy commanded the 5th battalion of the 60tb, at the battles of Roleia,
Vimiera, and Talavera, and has received a medal and a clasp.
74 Sir Charles Maxwell was engaged in the defence of the Island of St. Vincent, and
until the entire subjugation of the Caribs, in 1795. Landed, with the 63rd in North Hol¬
land, in Aug. 1799, and was present at the surrender of the Dutch fleet at the Helder, and
in the actions of the 19th Sept., 2nd and 6th Oct. In the following year, in the expedition
intended for the attack of Belleisle ; afterwards in the affair at Ferrol, and then in Gibraltar
and Malta until the peace of 1802. Served in South America, in 1806. Commanded the
land force in the capture of the French I'ortress and settlement of Senegal, in 1809.
75 Lieut.-General Mark Napier served on the coast of France, 1794 and 95. Six years
in the Mediterranean ; at Minorca, and in Egypt, present with his regiment in action. In
the West Indies several years, and commanded the 90th at the capture of Guadaloupe, for
which he has received a medal.
76 Lieut.-General Wardlaw commanded the 76th at the battle of the Nive, for which he
has received a medal.
77 Lieut.-General Yates served in Egypt, in 1801, and has received the Egyptian
medal.
78 Sir James Kearney served with the expedition to St. Domingo ; also several years in
the East Indies ; and at Walcheren, in 1809.
79 Lieut.-General Owen served at the capture of Martinique, St. Lucia, and Guadaloupe,
in 1794; at the repulse of the enemy's attack at Berville, in Guadaloupe, he was severely
wounded. Served also in Ireland during the rebellion, in 1798 ; and the campaign of 1799,
in Holland.
80 Lieut.-General Shortall served on the Continent, under the Duke of York, in 1794
and 95.
81 Sir Wm. Eustace was at the battles of Ross and Vinegar Hill, and at W^exford, and
all through the Irish rebellion, in 1798. Went to Naples with Sir James Craig ; from thence
to Sicily, and was present at the battle of Maida. Commanded the Chasseurs Brittaniques
at the battles of Fuentes d'Onor and Salamanca, also at the siege of San Christoval and many
other engagements, in two of which he was wounded, and in another he had a horse killed
under him. Medal and one clasp for Fueutes d'Onor and Salamanca.
82 Lord Greenock served in the Helder expedition, in 1799 ; in Naples and Sicily, in
1805 and 6 ; at Walcheren, including the siege of Flushing, in 1809 ; in the Peninsula,
including the battles of Barossa, Salamanca, and Vittoria, for which he has received a
medal and two clasps; also in the Netherlands and France, in 1815, including the battle of
Waterloo.
83 Lieut.-General EflSngham Lindsay served in St. Domingo in the campaigns of 1794,
5, and 6 ; at the Cape of Good Hope during the Caffre war in 1801; in the campaigns of
1803, 4, and 5, in India, under Lord Lake ; led the centre and storming column which cap¬
tured the fort of Deig, where he was severely wounded in single combat at the Gateway ; in
Jan. 1805, with his arm in a sling, again led the centre column of attack against Bburipore,
where he lost a leg.
84 Sir John Browne served in the Peninsula with the Portuguese army, and received
five wounds in action with the enemy, on the 18th Feb. 1811.
85 Lieut.-General the Honourable Hugh Arbuthnott served at the Helder, in 1799 ; the
expedition to the Baltic, and battle of Copenhagen, in 1801; and again with the second ex-