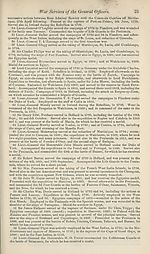 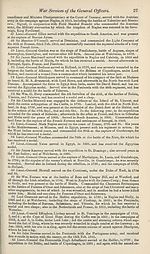 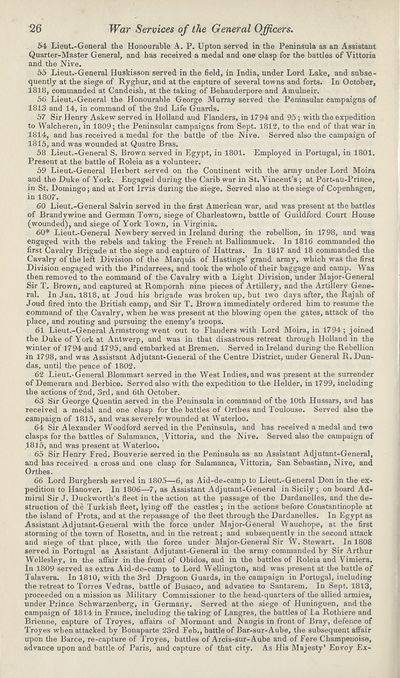 26 War Services of the General Officers.
54 Lieut.-General the Honourable A. P. Upton served in the Peninsula as an Assistant
Quarter-Master General, and has received a medal and one clasp for the battles of Vittoria
and the Nive.
55 Lieut.-General Huskisson served in the field, in India, under Lord Lake, and subse¬
quently at the siege of Ryghur, and at the capture of several towns and forts. In October,
1818, commanded at Candeish, at the taking of Behauderpore and Amulneir.
56 Lieut.-General the Honourable George Murray served the Peninsular campaigns of
1813 and 14, in command of the 2nd Life Guards.
57 Sir Henry Askew served in Holland and Flanders, in 1794 and 95 ; with the expedition
to Walcheren, in 1809; the Peninsular campaigns from Sept. 1812, to the end of that war in
1814, and has received a medal for the battle of the Nive. Served also the campaign of
1815, and was wounded at Quatre Bras.
58 Lieut.-General S. Brown served in Egypt, in 1801. Employed in Portugal, in 1801.
Present at the battle of Roleia as a volunteer.
59 Lieut.-General Hetbert served on the Continent with the army under Lord Moira
and the Duke of York. Engaged during the Carib war in St. Vincent's ; at Port-au-Prince,
in St. Domingo; and at Fort Irvis during the siege. Served also at the siege of Copenhagen,
in 1807.
60 Lieut.-General Salvin served in the first American war, and was present at the battles
of Brandywine and German Town, siege of Charlestown, battle of Guildford Court House
(wounded), and siege of York Town, in Virginia.
60* Lieut.-General Newbery served in Ireland during the rebellion, in 1798, and was
engaged with the rebels and taking the French at Ballinamuck. In 1816 commanded the
first Cavalry Brigade at the siege and capture of Hattras. In 1817 and 18 commanded the
Cavalry of the left Division of the Marquis of Hastings' grand army, which was the first
Division engaged with the Pindarrees, and took the whole of their baggage and camp. Was
then removed to the command of the Cavalry with a Light Division, under Major-General
Sir T. Brown, and captured at Romporah nine pieces of Artillery, and the Artillery Gene¬
ral. In Jan. 1818, at Joud his brigade was broken up, but two days after, the Rajah of
Joud fired into the British camp, and Sir T. Brown immediately ordered him to resume the
command of the Cavalry, when he was present at the blowing open the gates, attack of the
place, and routing and pursuing the enemy's troops.
61 Lieut.-General Armstrong went out to Flanders with Lord Moira, in 1794; joined
the Duke of York at Antwerp, and was in that disastrous retreat through Holland in the
winter of 1794 and 1795, and embarked at Bremen. Served in Ireland during the Rebellion
in 1798, and was Assistant Adjutant-General of the Centre District, uuder General R. Dun-
das, until the peace of 1802.
62 Lieut.-General Blommart served in the West Indies, and was present at the surrender
of Demerara and Berbice. Served also with the expedition to the Helder, in 1799, including
the actions of 2nd, 3rd, and 6th October.
63 Sir George Quentin served in the Peninsula in command of the 10th Hussars, and has
received a medal and one clasp for the battles of Orthes and Toulouse. Served also the
campaign of 1815, and was severely wounded at Waterloo.
64 Sir Alexander Woodford served in the Peninsula, and has received a medal and two
clasps for the battles of Salamanca, Vittoria, and the Nive. Served also the campaign of
1815, and was present at Waterloo.
65 Sir Henry Fred. Bouverie served in the Peninsula as an Assistant Adjutant-General,
and has received a cross and one clasp for Salamanca, Vittoria, San Sebastian, Nive, and
Orthes.
66 Lord Burghersh served in 1805—6, as Aid-de-camp to Lieut.-General Don in the ex¬
pedition to Hanover. In 1806—7, as Assistant Adjutant-General in Sicily ; on board Ad¬
miral Sir J. Duckworth's fleet in the action at the passage of the Dardanelles, and the de¬
struction of the Turkish fleet, lying off the castles ; in the actions before Constantinople at
the island of Prota, and at the repassage of the fleet through the Dardanelles. In Egypt as
Assistant Adjutant-General with the force under Major-General Wauchope, at the first
storming ol the town of Ilosetta, and in the retreat ; and subsequently in the second attack
and siege of that place, with the force under Major-General Sir W. Stewart. In 1808
served in Portugal as Assistant Adjutant-General in the army commanded by Sir Arthur
Wellesley, in the affair in the front of Obidos, and in the battles of Roleia and Vimiera.
In 1809 served as extra Aid-de-camp to Lord Wellington, and was present at the battle of
1'alavera. In 1810, with the 3rd Dragoon Guards, in the campaign in Portugal, including
the retreat to Tones Vedras, battle of Busaco, and advance to Santarem. In Sept. 1813,
proceeded on a mission as Military Commissioner to the head-quarters of the allied armies,
under Prince Schwarzenberg, in Germany. Served at the siege of Huninguen, and the
campaign of 1814 in France, including the taking of Langres, the battles of La Rothiere and
Brienne, capture of Troyes, affairs of Mormant and Nangis in front of Bray, defence of
Troves when attacked by Bonaparte 23rd Feb., battle of Bar-sur-Aube, the subsequent affair
upon the Barce, re-capture of 'i'royes, battles of Arcis-sur-Aube and of Fere Champenoise,
advance upon and battle of Paris, and capture of that city. As His Majesty' Envoy Ex-