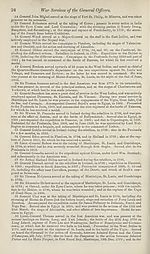 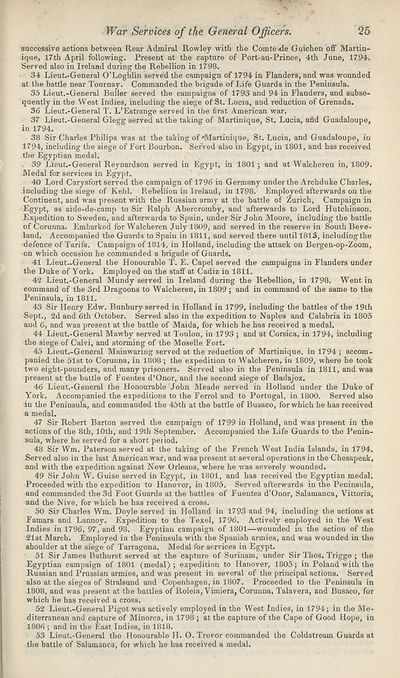 War Services of the General Officers. 25
successive actions between Rear Admiral Rowley with the Comtede Guichen off Martin¬
ique, 17th April following. Present at the capture of Port-au-Prince, 4th June, 1794.
Served also in Ireland during the Rebellion in 1798.
34 Lieut.-General O'Loghlin served the campaign of 1794 in Flanders, and was wounded
at the battle near Tournay. Commanded the brigade of Life Guards in the Peninsula.
35 Lieut.-General Buller served the campaigns of 1793 and 94 in Flanders, and subse¬
quently in the West Indies, including the siege of St. Lucia, and reduction of Grenada.
36 Lieut.-General T. L'Estrange served in the first American war.
37 Lieut.-Geueral Glegg served at the taking of Martinique, St. Lucia, afid Guadaloupe,
in 1794.
38 Sir Charles Philips was at the taking of ^lartinique, St. Lucia, and Guadaloupe, in
1794, including the siege of Fort Bourbon. Served also in Egypt, in 1801, and has received
the Egyptian medal.
39 Lieut.-General Reynardson served in Egypt, in 1801 ; and at VValcheren in, 1809.
Medal for services in Egypt.
40 Lord Carysfort served the campaign of 1796 in Germany under the Archduke Charles,
including the siege of Kehl. Rebellion in Ireland, in 1798. Employed afterwards on the
Continent, and was present with the Russian army at the battle of Zurich. Campaign in
Egypt, as aide-de-camp to Sir Ralph Abercromby, and afterwards to Lord Hutchinson.
Expedition to Sweden, and afterwards to Spain, under Sir John Moore, including the battle
of Corunna. Embarked for Walcheren July 18<)9, and served in the reserve in South Beve-
land. Accompanied the Guards to Spain in 1811, and served there until 1813, including the
defence of Tarifa. Campaign of 1814, in Holland, including the attack on Bergen-op-Zoom,
on which occasion he commanded a brigade of Guards.
41 Lieut.-General the Honourable T. E. Capel served the campaigns in Flanders under
the Duke of York. Employed on the staff at Cadiz in 1811.
42 Lieut.-General Mundy served in Ireland during the Rebellion, in 1798. Went in
command of the 3rd Dragoons to Walcheren, in 1809 ; and in command of the same to the
Peninsula, in 1811.
43 Sir Henry Edw. Bunbury served in Holland in 1799, including the battles of the 19th
Sept., 2d and 6th October. Served also in the expedition to Naples and Calabria in 1805
and 6, and was present at the battle of Maida, for which he has received a medal.
44 Lieut.-General Mawby served at Toulon, in 17 93 ; and at Corsica, in 1794, including
the siege of Calvi, and storming of the Moselle Fort.
45 Lieut.-General Mainwaring served at the reduction of Martinique, in 1794 ; accom¬
panied the 51st to Coruiina, in 1808; the expedition to Walcheren, in 1809, where he took
two eight-pounders, and many prisoners. Served also in the Peninsula in 1811, and was
present at the battle of Fuentes d'Onor, and the second siege of Badajoz.
46 Lieut.-General the Honourable John Meade served in Holland under the Duke of
York. Accompanied the expeditions to the Ferrol and to Portugal, in 1800. Served also
in the Peninsula, and commanded the 45th at the battle of Busaco, for which he has received
a medal.
47 Sir Robert Barton served the campaign of 1799 in Holland, and was present in the
actions of the 8th, 10th, and 19th September. Accompanied the Life Guards to the Penin¬
sula, where he served for a short peiiod.
48 Sir Wm. Paterson served at the taking of the French West India Islands, in 1794.
Served also in the last American war, and was present at several operations in the Chesapeak,
and with the expedition against New Orleans, where he was severely wounded.
49 Sir John W. Guise served in Egypt, in 1801, and has received the Egyptian medal.
Proceeded with the expedition to Hanover, in 1805. Served afterwards in the Peninsula,
and commanded the 3d Foot Guards at the battles of Fuentes d'Onor, Salamanca, Vittoria,
and the Nive, for which he has received a cross.
50 Sir Charles Wm. Doyle served in Holland in 1793 and 94, including the actions at
Famars and Lannoy. Expedition to the Texel, 1796. Actively employed in the West
Indies in 1796, 97, and 93. Egyptian campaign of 1801—wounded in the action of the
21st March. Employed in the Peninsula with the Spanish armies, and was wounded in the
shoulder at the siege of Tarragona. Medal for services in Egypt.
51 Sir James Bathurst served at the capture of Surinam, under Sir Thos. Trigge ; the
Egyptian campaign of 1801 (medal) ; expedition to Hanover, 1805; in Poland witli the
Russian and Prussian armies, and was present in several of the principal actions. Served
also at the sieges of Stralsund and Copenhagen, in 1807. Proceeded to the Peninsula in
1808, and was present at the battles of Roleia, Vimiera, Corunua, Talavera, and Busaco, for
which he has received a cross.
52 Lieut.-General Pigot was actively employed in the West Indies, in 1794; in the Me¬
diterranean and capture of Minorca, in 1798 ; at the capture of the Cape of Good Hope, in
1806 ; and in the East Indies, in 1818.
53 Lieut.-General the Honourable II. O. Trevor commanded the Coldstream Guards at
the battle of Salamanca, for which he has received a medal.