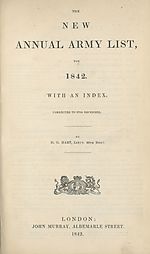 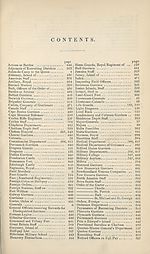 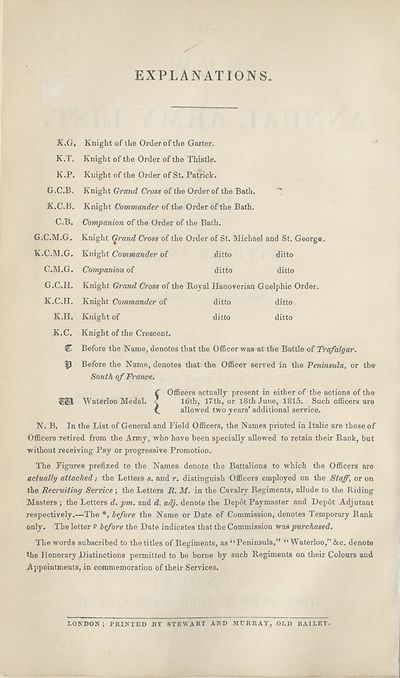 EXPLANATIONS.
JC.G. Knight of the Order of the Garter.
K.T. Knight of the Order of the Thistle.
K.P. Knight of the Order of St. Patrick.
G.C.B. Knight Grand Cross of the Order of the Bath.
K.C.B. Knight Commander of the Order of the Bath.
C.B. Companion of the Order of the Bath.
G.C.M.G. Knight Grand Cross of the Order of St. Michael and St. Georg*,
K.C.M.G. Knight Commander of ditto ditto
C.M.G. Companion o£ ditto ditto
G.C.H. Knight Grand Cross of the Royal Hanoverian Guelphic Order.
K.C.H. Knight Commander of ditto ditto
K.H. Knight of ditto ditto
K.C. Knight of the Crescent.
C Before the Name, denotes that the Officer was at the Battle of Trafalgar.
^ Before the Name, denotes that the Officer served in the Peninsula, or the-
South oy France.
C Officers actually present in either of the actions of tho
31® Waterloo Medal. < 16th, 17th, or 18tb June, 1815. Such officers are
C. allowed two years' additional service.
N. B. In the List of General and Field Officers, the Names printed in Italic are those of
Officers retired from the Army, who have been specially allowed to retain their Rank, but
without receiving Pay or progressive Promotion.
The Figures prefixed to the Names denote the Battalions to which the Officers are
actually attached; the Letters s. and r. distinguish Officers employed on the Staff, or on
the Recruiting Service ; the Letters R. M. in the Cavalry Regiments, allude to the Riding
Masters ; the Letters d. pm. and d. adj. denote the Dejiot Paymaster and Depot Adjutant
respectively.—The *, before the Name or Date of Commission, denotes Temporary Rank
only. The letter p before the Date indicates that the Commission was purchased.
The words subscribed to the titles of Regiments, as "Peninsula," " Waterloo," &c. denote
the Honorary Distinctions permitted to be borne by such Regiments on their Colours and
Appointments, in commemoration of their Services.
LONDON : PRINTED BY STEWART AND MURRAY, OLD BAILBT.