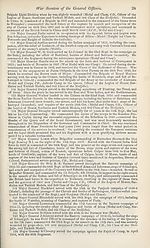 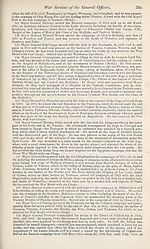 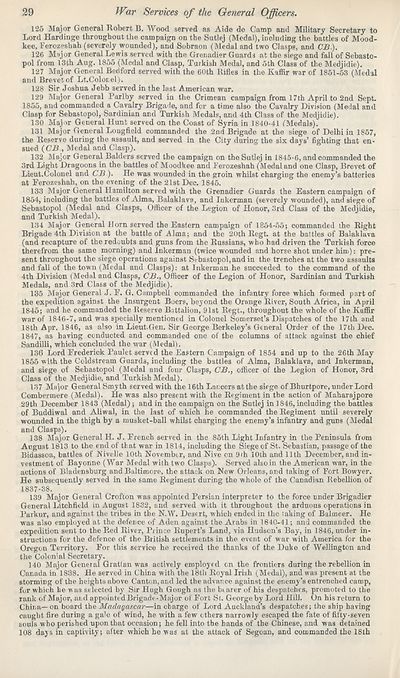 29 ^«r Services of the General Officers.
125 Major General Robert B. Wood served as Aide de Camp and Military Secretary to
Lord Hardinge throughout tlie campaign on the Sutlej (Medal), including the battles of Mood-
kee, Ferozeshah (severely wounded), and Sobraon (Medal and two Clasps, and CB.).
126 M^jor General Lewis served with the Grenadier Guards at the siege and fall of Sebasto-
pol from 13th Aug. 1855 (Medal and Clasp, Turkish Medal, and 5th Class of the Medjidie).
127 Major General Bedford served with the 60th Rifles in the Kaffir war of 1851-53 (Medal
and Brevet of Lt.ColoLel).
128 Sir Joshua Jebb served in the last American war.
129 Major General Parlby served in the Crimean campaign from 17th April to 2nd Sept.
1855, and commanded a Cavalry Brigale, and for a time also the Cavalry Division (Medal and
Clasp for Sebastopol, Sardinian and Turkish Medals, and 4th Class of the Medjidie).
130 Major General Hunt served on the Coast of Syria in 1840-41 (Medals).
131 Major General Longfield commanded the 2nd Brigade at the siege of Delhi in 1857,
the Reserve during the assault, and served in the City during the six days' fighting that en¬
sued {CB , Medal and Clasp).
132 Major General Balders served the campaign on the Sutlej in 1845-6, and commanded the
3rd Light Dragoons in the battles of Moodliee and Ferozeshah (Medal and one Clasp, Brevet of
Lieut.Colonel and CB ). He was wounded in the groin whilst charging the enemy's batteries
at Ferozeshah, on the evening of the 21st Dec. 1845.
133 Major General Hamilton served with the Grenadier Guards the Eastern campaign of
1854, including the battles of Alma, Balaklavs, and Inkerman (severely wounded), and siege of
Sebastopol (Medal and Clasps, Officer of the Legion of Honor, Ord Class of the Medjidie,
and Turkish Medal).
134 Major General Horn served the Eastern campaign of 1854-55; commanded ihe Right
Brigade 4'th Division at the battle of Alma; and the 20th Rcgt. at the battles of Balaklava
(and recapture of thered..ubts and guns from the Russians, who had driven the Turkish force
therefrom the same morning) and Inkerman (twice wounded and horse shot under him): pre¬
sent throughout the siege operations ajjainst Stbastopol,and in the trenches at the two assaults
and fall of the town (Mtdal and Clasps): at Inkerman he succeeded to the command of the
4th Division (Medal and Clasps, CB., Officer of the Legion of Honor, Sardinian and Turkish
Medals, and 3rd Class of the Medjidie).
135 Major General J. F. G. Ciimpbell commanded the infantry force which formed part of
the expedition against the Insurgent Boers, beyond the Orange River, South Africa, in April
1845; and he commanded the Reserve Battalion, 91st Begt., throughout the whole of the Kaffir
war of 1846-7, and was specially mcntiontd in Colonel Somerset's Dispatches of the 17lh and
18th Apr. 1846, as also in Lieut.Gen. Sir George Berkeley's General Order of the 17lli Dec.
1847, as having conducted and commanded one of the columns of attack against the chief
Sandilli, which concluded the war (Medal).
136 Lord Frederick Paulet served the Eastern Campaign of 1854 and up to the 26th May
1855 with the Ccldstream Guards, including the battles of Alma, Balaklava, and Inkerman,
and siege of Sebastopol (Medal and four Clasps, CB., officer of the Legion of Honor, 3rd
Class of the Medjidie, and Turkish Medal).
137 Major General Smyth served with the 16th Lai:cers at the siege of Bhurtpore, under Lord
Combermere (Medal), fie was also present with the Regiment in the action of Maharajpore
29th December 1843 (Medal) ; and in the campaign on the Sutlej in 1846, including the battles
of Buddiwal and Aliwal, in the last of which he commanded the Regiment until severely
wounded in the thigh by a nmsket-ball whilst charging the enemy's infantry and guns (Medal
and Clasps).
138 Major General H. J. French served in the 8oth Light Infantry in the Peninsula from
August 1813 to the end of that war in 1814, including the Siege of St. Sebastian, passage of the
Bidassoa, battles of Nivelle lOlh November, and Nive on 9ih 10th and 11th December, and in¬
vestment of Bayonne (War Medal with two Clasps). Served also in the American war, in the
actions of Bladensburg and Baltimore, the attack on New Orleans, and taking of Fort Bowyer.
He subsequently served in the same Regiment during the whole of the Canadian Rebellion of
1837-38.
139 Major General Crofton was appointed Persian interpreter to the force under Brigadier
General Litchfitld in August 1832, and served with it throughout the arduous operations in
Parkur, and against the tribes in the N.W. Desf rt, which ended in the iaking of Balmeer. He
was also employed at the defence of Aden against the Arabs in 1640-41; and commanded the
expedition sent to the Bed River, Pi ince Rupert's Land, via Hudson's Bay, in 1846, under in¬
structions for the defence of the British settlements in the event of war with America for the
Oregon Territory. For this service he received the thanks of the Duke of Wellington and
the Colonial Secretary.
140 Major General Gratlan was actively employed en the frontiers during the rebellion in
Canada in* 1838. He served in China with the 18tli Royal Irish (Miclal), and was present at the
storming of the heights above Canton, and led the advai.ce against the enemy's entrenched camp,
fur which he vvas selected by Sir Hugh Gough as Ihe btarer of his despatches, promoted to the
rank of Major, aid appointed Brigade-Major of Fort St. George by Lord Hill. On his return to
China—on board the Madagascar—in charge of Leird Auckland's despatches; the ship having
caught fire during a ga'e of wind, he with a few ethers narrowly escaped the fate of fifty-seven
souls whoperiihed upon that occasion; he fell into the hands of the Chinese, and was detained
108 days in captivity; after which he was at the attack of Segoan, and commanded the 18th