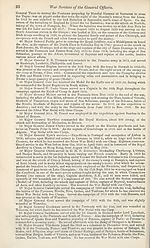 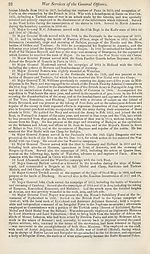 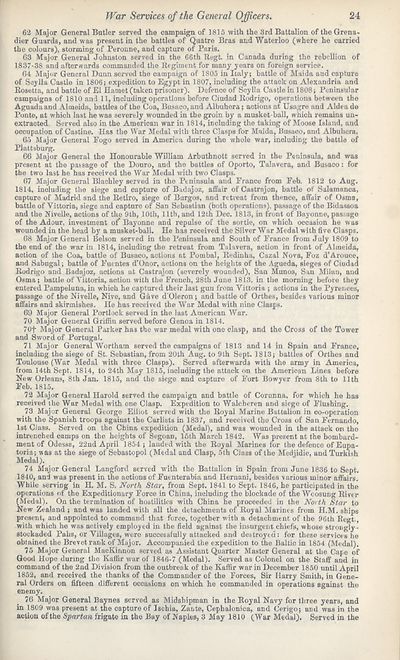 War Services of the General Officers. 24
62 Major General Butler served the campaign of 1815 with the 3rd Battalion of the Grena¬
dier Guards, and was present in the battles of Quatre Bras and Waterloo (where he carried
the colours), storming of Peroune, and capture of Paris.
03 Major General Johnston served in the 66th llegt. in Canada during the rebellion of
1837-38 and afterivards commanded the llfgimtnt for many years on foreign service.
04 Majnr General Dunn served the campaign of 1805 in Italy; battle of M'lida and capture
of SujUa Castle in 1806; expedition to Egypi in 1807, including the aUack on Alexandria and
Rosetta, aad battle of El Hamet (taken prisoner). Defence of Soylla Castle in 1808; Peninsular
campaigns of 1810 ani II, including operations before Ciudad Kodrigo, operations between the
Aguadaand Almeida, battles of the Coa, Busaco, and Albuhera; actions at Usagre and Aldea de
Ponte, at which last he was severely wounded in the groin by a musket ball, which remains un-
extracted Served also in the American war in 1814, including the taking of ]\Ioose Island, and
occupation of Castine. Has the War Medal with three Clasps for Maida, Busaco, and Albuhcra.
6') Major General Fogo served in America during the whole war, including the battle of
Plattiburg.
06 Major General the Honourable William Arbuthnott served in the Peninsula, and was
present at the passage of the Douro, and the battles of Oporto, Talavera, and Busaco : for
the two last he has received the \yar Medal with two Clasps.
67 Major General Blachley served in the Ptninsula and France from Feb. 1812 to Aug.
1814, including the siege and capture of Bidajoz, affair of Castrajon, battle of Salamanca,
capture of ^Madrid and the Keliro, siege of Burgos, and rttieat from thence, affair of Osma,
battle of Vittoria, siege and capture of San Sebastian (both operations), passage of the Bidassoa
and the Nivelle, actions of the 9th, lOtli, 11th, and 12th Dec. 1813, in front of Bayonne, pas age
of the Adour, investment ot Bayonne and repulse of the sortie, on which occasion he was
wounded in the head by a musket-ball. He has received the Silver War Medal with five Clasps.
08 Major General Belson served in the Peninsula and South of France from July 1809 to
the end of the war in 1814, including the retreat from Tiilivera, action in front of Almeida,
action of the Coa, battle of Busaco, actions nt Pombal, Kedinha, Cazal Nova, Foz d'Arouce,
and Sabugal; battle of Futntes d'Onor, actions on the heights of the Agueda, sieges of Ciudad
Kudrigo and Badajoz, actions at Castrajon (severely wounded), San Munos, San Milan, and
Osma; battle of Vittoria, action with the French, 28th June 1813, in the morning before they
entered Pampeluna, in which he captured their last gun from Vittoria ; actions in the Pyrenees,
passage of the Nivelle, Nive, and Give d'Oleron; and battle of Orthes, besides various minor
affairs and skirmishes. He has received the War Medal with nine Clasps.
09 Major General Portlock served in the last American War.
70 Major General Griffin served before Genoa in 1814.
70t Major General Parker has the war medal with one clasp, and the Cross of the Tower
and Sword of Portugal.
71 Major General Wortham served the campaigns of 1813 and 14 in Spain and France,
including the siege of St. Sebastian, from 20th Aug. to 9th Sept. 1813; battles of Orthes and
Toulouse (War Medal with three Clasps). Served afterwards with the army in America,
from 14th Sept. 1814, to 24th May 1815, including the attack t>n the American Lines before
New Orleans, 8th Jan. 1815, and the siege and capture of Fort Bowycr from 8th to Uth
Feb. 1815.
72 Major General Harold served the campaign and battle of Corunna, for which he has
received the War Medal with one Clasp. Expedition to Walchoren and siege of Flushing.
73 Majur General George Elliot served with the Royal Marine Battalion in co-operation
with the Spanish troops against the Carlists in 1837, and received the Cross of San Fernando,
1st Class. Served on the China expedition (Medal), and was wounded in the attack on the
intrenched camps on the heights of Segoan, 15th March 1842. Was present at the bombard¬
ment of Odessa, 22nd April 1854 ; landed with the Royal Marines for the defence of Eupa-
toria; was at the siege of Sebastopol (Medal and Clasp, 5th Class of the Medjidie, and Turkish
Medal).
74 Major General Langford served with the Battalion in Spain from June 1836 to Sept.
1840, ani was present in the actions of Fuenterabia and Hernani, besides various minor affairs.
While serving in H. M. S. North Star, from Sept. 1841 to Sept. 1846, he participated in the
operations of the Expeditionary Force in China, including the blockade of the Woosung River
(Medal). On the termination of hostilities with China he proceeded in the North Star to
New Zealand ; and was landed with all the detachments of Royal Marines from H.M. ships
present, and appointed to command tiiat force, together with a detachment of the 9Gth Regt.,
with which he was actively employed in the field against the insurgent chiefs, whose strongly.
stockaded Pahs, or Villages, were succeEsfully attacked and destroyed: for these services he
obtained the Brevet rank of Major. Accompanied the expedition to the Baltic in 1854 (Medal).
75 Major General MacKinnon served as Assistant Quarter Master General at the Cape of
Good Hope during the Kaffir war of 1846-7 (Medal). Served as Colonel on the Staff and in
command of the 2ad Division from the outbreak of the Kaffir war in December 1850 until April
1852, and received the thanks of the Commander of the Forces, Sir Harry Smith, in Gene¬
ral Orders on fifteen different occasions on which he commanded in operations against the
enemy.
76 Major General Baynes served as Midshipman in the Royal Navy for three years, and
in 1809 was present at the capture of Ischia, Zante, Cephalonica, and Cerigo; and was in the
action of the Spartan frigate in the Bay of Naples, 3 May 1810 (War Mtdul). Served in the