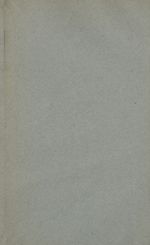 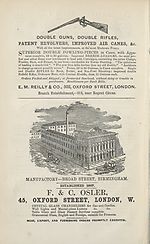 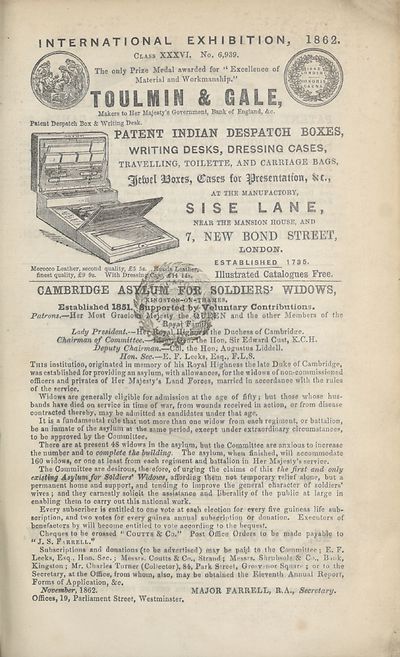 INTERNATIONAL EXHIBITION, 1862.
Class XXXVI. No. 6,939.
The only Prize Medal awarded for " Excellence of
Material and Workmanship."
TOULMIN & GALE,
Makers to Her llajestj-'s Government, Bank of England, &c.
Patent Despatch Box & Writing Desk.
PATENT INDIAN DESPATCH BOXES,
WRITING DESKS, DRESSING CASES,
TRAVELLING, TOILETTE, AND CARRIAGE BAGS,
gjttocl 33ox£8, ®nscs for ^restntation, ^t,,
AT THE MANUFACTORY,
S I S E LANE,
NEAR THE MANSION HOUSE, AND
7, NEW BOND STREET,
LONDON.
Morocco Leather, second quality, £5 Ss. Bfussia teatheriv
finest quality, £9 9s. With Ure&sing.Ca^ £"14 Ids,
ESTABLISHED 173 5.
Illustrated Catalogues Free.
CAMBRIDGE AS
FOR SOLDIERS^ WIDOWS,
^ .")Cl«GST<Mi-Ot(-THAMES.
Established 1851.^mipporied by Voluntary Contributions.
Patrons.—Her Most GracioSJ.-: ftlnjcsty the Ql^jl^N and the other ilembers of the
Lady President.—^^&ns\,iifg^Qf^tS{he Duchesa of Cambridse.
Chairman of Committee.—^^mspbftffOne Hon. Sir Edward Cust, K.C.H.
Deputy Chairman.—Col. the Hon. Aujfustus Liddell.
Hon. Sec—E. F. Leeks, Esq., F.L.S.
This institution, originated in memory of his Royal Highness the late Duke of Cambridge,
was established for providing an asylum, with allowances, for the vtidoivs of non-commissioned
officers and privates of Her Majesty's Land Forces, married in accordance with the rules
of the service.
Widows are generally eligible for admission at the age of fifty ; but those whose hus¬
bands have died on service in time of war, from wounds received in action, or from disease
contracted thereby, may be admitted as candidates under that age.
It is a fundamental rule that not more than one widow from each regiment, or battalion,
be an inmate of the asylum at tbe s^me period, except under extraordinary circumstances,
to be approved by the Committee.
There are at present 48 widows in the asylum, but the Committee are anxious to increase
the number and to complete the building. The asylum, when finished, will accommodate
160 widows, or one at least from each regiment and battalion in Her Majesty's service.
The Committee are desirous, the efore, of urging the claims of this the first and only
existing Asylum for Soldiers' Widows, affording them not temporary relief alone, but a
permanent home and support, and tending to improve the general character of soldiers'
wives ; and they earnestly solicit the assistance and liberality of the public at large in
enabling them to carry out this national work.
Every subscriber is entitled to one vote at each election for eyery five guineas life sub¬
scription, and two votes for every guinea annual subscription Or donation. E.\ecutors of
benefactors by will become entitled to vole according ro the liequest.
Cheques to be crossed " CouTTS & Co." Post Office Orders to be m«de payable to
" J. S. FlRRELL.*
Subscriiitiong and donations (to be advertised) may be paid to the Committee; E. F.
Leeks, Esq., Hon. Sec; Messrs. Coutts & Ci'., Strand; Messrs. Siiruhsole & C >., Bmk,
Kingston; Mr. I'harles Tcirner (Collector), 84, Park S'reel, Gro-v-nor Sqiian ; or to the
Secretary, at the Office, from whom, also, may be obtained the Eleventh Annual Repoif,
Forms of Application, &c.
November, 1862. MAJOR FARRELL, R.A., Secretary.
Offices, 19, Parliament Street, Westminster.