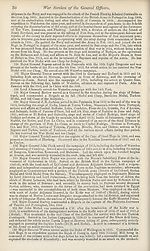 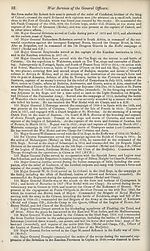 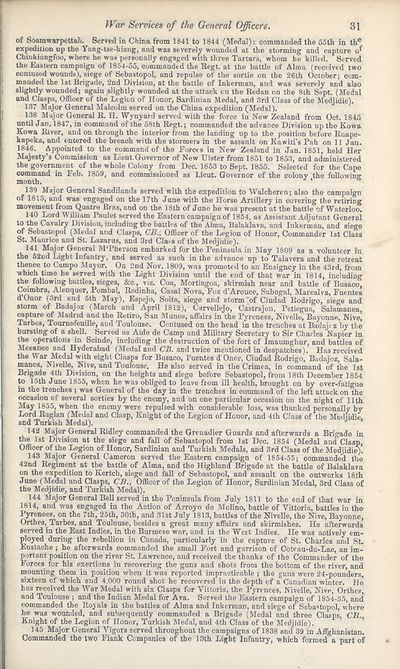 PVar Services of the General Officers. 31
"f Soamwarpettah. Served in Cbina from 1841 to 1844 (Medal): commanded the 55th in th®
expedition up the Yang-tse-kiang, and was severely wounded at the storming and capture o*^
Chinkiangfoo, where he was personally engaged with three Tartars, whom he killed. Served
the Eastern campaign of 1854-55, commanded the Kegt. at the battle of Alma (received two
contused wounds), siege of Sebaatopol, and repulse of the sortie on the 26lh October; com¬
manded the 1st Brigade, 2nd Division, at the battle of Inkerman, and was severely and also
slightly wounded; again slightly wounded at the attack en the Redan on the 8th Sept. (Medal
and Clasps, OtRcer of the Legion of Honor, Sardinian Medal, and 3rd Class of the Aledjidie).
137 Major General Malcolm served on the China expedition (Medal).
138 Major General K. H. Wynyard served with the force iu New Zealand from Oct. 1845
until Jan. 1847, in command of the 58th Regt.; commanded the advance Division up the Kowa
Kowa River, and on through the interior from the landing up to the position before Ruape-
kapeka, and entered the breach with the stormers in the assault on Kawiti's Pah on 11 Jan.
1846. Appointed to the command of the Forcfs in New Zealand in Jan. 1851, held Her
Majesty's Commission as Lieut.Governor of New Ulster from 1851 to 1853, and administered
the government of the whole Colony from Dec. 1853 to Sept. 1855. Selected for the Cape
command in Feb. 1859, and commissioned as Lieut. Governor of the colony the foliowine
month. ' ' *
139 Major General Sandilands served with the expedition to Walcheren; also the campaign
of 1815, and was engaged on the 17th June with the Horse Artillery in covering the retiring
movement from Quatre Bras, and on the 18th of June he was present at the battle of Waterloo.
140 Lord William Paulet served the Eastern campaign of 1854, as Assistant Adjulant General
to the Cavalry Division, including the battlns of the Alma, Balaklava, and Inkeriuau, and siege
of Sebastopol (Medal and Clasps, CB., Officer of the Legion of Honor, Commander 1st Class
St. Maurice and St. Lazarus, and 3rd Cla-s of the Medjidie).
141 Major General M'Pherson embarked for the Peninsula in May 1809 as a volunteer in
the 52Dd Light Infantry, and served as such in the advance up to Talavera and the retreat
thence to Campo Mayor. On 2nd Nov. 1809, was promoted to an Ensigncy in the 43rd, from
which time he served with the Light Division until the end of that war in 1814, including
the following battles, sieges, &c., viz. Coa, Mortiagoa, skirmish near and battle of Busaco,
Coimbra, Alenquer, Pombal, Redinha, Casal Nova, Foz d'Arouce, Sabugal, Marealva, Fuentes
d'Onor (3rd and 5th Miy), Espejo, Soita, siege and storm of Ciudad Rodrigo, siege and
storm of Badajoz (March and April 1812), Carvellejo, Castrajon, Peticgua, Salamanca,
capture of Madrid and the Retiro, Sin Munos, affairs in the Pyrenees, Nivelle, Bayonnn, Nive,
Tarbes, Tournefeuille, and Toulouse. Contused on the head in the trenches at Badaj( z by the
bursting of a shell. Served as Aide de Camp and Military Secretary to Sir Charles Napier in
the operations in Scinde, including the destruction of the fort of Imaumghur, and battles of
Meeanee and Hyderabad (Medal and CB. and twice mentioned in despatches). Has received
the War Medal with eight Clasps for Busaco, Fuentes d Onov, Ciudad Rodrigo, Badajor, Sala¬
manca, Nivelle, Nive, and Toulouse. He also served in the Crimea, in command of the 1st
Brigade 4th Division, on the heights and siege before Sebastopol, from 18th December 1854
to 15th June 1855, when he was obliged to leave from ill health, brought on by over-fatigue
in the trenches ; was General of the day in the trenches in command of the left attack on the
occasion of several sorties by the enemy, and on one particular occasion on the night of 11th
May 1855, when the enemy were repulsed with considerable loss, was thanked personally by
Lord Raglan (Medal and Clasp, Ivnight of the Legion of Honor, and 4th Class of the Mediidie,
and Turkish Medal).
142 Major General Ridley commanded the Grenadier Guards and afterwards a Brigade in
the 1st Division at the siege and fall of Sebastopol from 1st Dec. 1854 (Medal and Clasp,
Officer of the Legion of Honor, Sardinian and Turkish Medals, and 3rd Class of the Medjidie).
143 Major General Cameron served the Eastern campaign of 1854-55; commanded the
42nd Regiment at the battle of Alma, and the Highland Brigade at the battle of Balaklava
on the expedition to Kertch, siege and fall of Sebastopol, and assault on the outworks 18th
June (Medal and Clasps, CB., Officer of the Legion of Honor, Sardinian Medal, 3rd Class of
the Medjidie, and Turkish Medal).
144 Major General Bell served in the Peninsula from July 1811 to the end of that war in
1814, and was engaged in the Action of Arroyo do Molino, battle of Vittoria, battles in the
Pyrenees, on the 7th, 25th, 30th, and 31st July 1813, battles of the Nivelle, the Nive, Bayonne,
Orthes, Tarbes, and Toulouse, besides a great many affairs and skirmishes. Ho afterwards
served in the East Indies, in the Burmese war, and in the West Indies. lie was actively em¬
ployed during the rebellion in Canada, particularly in the capture of St. Charles and St.
Eustache ; he afterwards commanded the small Fort and garrison of Coteau-du-Lac, an im¬
portant position on the river St. Lawrence, and received the thanks of the Commander of the
Forces for his exertions in recovering the guns and shots from the bottom of the river, and
mounting them in position when it was reported impracticable ; the guns were 24-pounders,
sixteen of which and 4,000 round shot he recovered in the depth of a Canadian winter. He
has received the AVar Medal with six Clasps for Vittoria, the Pyrenees, Nivelle, Nive, Orthes,
and Toulouse ; and the Indian Medal for Ava. Served the Eastern campaign of 1854-55, and
commanded the P.ojals in the battles of Alma and Inkcrman, and siege of Seba«topol, where
„ ,-, , -^ - ^ " • - '■ -A-ffgha
Commanded the two Flank Ccmpanies of the 13th Light Infantry, which formed a part of