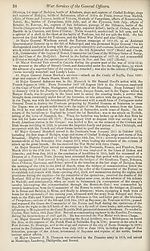 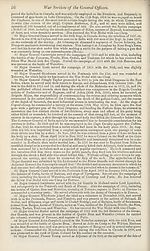 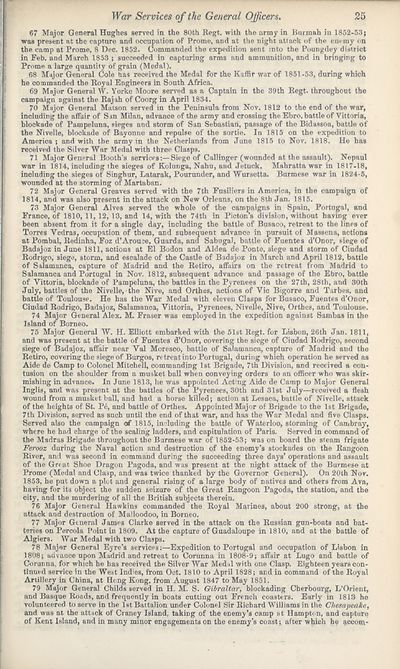 War Services of the General Officers. 25
67 Major General Hughes served in the 80th Regt. with the army in Burinah in 1852-53;
was present at the capture and occupation of Prome, and at the night attack of the enemy on
the camp at Prome, 8 Dec. 1852. Commanded the expedition sent into the Poungdey district
in Feb. and March 185.3 ; succeeded in capturing arms and ammunition, and in bringing to
Prome a large quantity of grain (Medal).
68 Mijor General Cole has received the Mediil for the Kaffir war of 1851-53, during which
he commanded the Royal Engineers in South Africa.
69 Major General W. Yorke iMoure served as a Captain in the 39th Regt. throughout the
campaign against the Rajih of Coorg in April 1834.
70 Major General Matson served in the Peninsula from Nov. 1812 to the end of the war,
including the affair of Sin Milan, advance of the army and crossing the Ebro. battle of Vittoria,
blockade of Pampeluna, sieges and storm of San Sebastian, passage of the Bidassoa, battle of
the Nivelle, blockade of Bayonne and repulse of the sortie. In 1815 on the expedition to
America ; and with the army m the Netherlands from June 1815 to Nov. 1818. He has
received the Silver War Medal with three Clasps.
71 Major Genpral Booth's servierg:—Siege of Callinger (wounded at the assault). Nepaul
war in 1814, including the sieges of Kolunga, Nahu, and Jetuck. Mahratta war in 1817-18,
including the sieges of Singhur, Latarak, Pourunder, and Wursetta. Burmese war in 1824-5,
wounded at the storming of Martaban.
72 Major General Greaves served with the 7th Fusiliers in America, in the campaign of
1814, and was also present in the attack on New Orleans, on the 8th Jan. 1815.
73 Major General Alves served the whole of the campaigns in Spain, Portugal, and
France, of 1810, 11, 12, 13, and 14, with the 74tU in Picton's division, without having ever
been absent from it for a single day, including the battle of Busaco, retreat to the lines of
Torres Vedras, occupation of them, and subsequent advance in pursuit of Massena, action*
at Pombal, Redinha, Foz d'Arou;e, Guarda, and Sabugal, battle of Fuentes d'Onor, Kiege of
Badajoz in June 1811, actions at El Bodon and Aldea do Ponte, siege and storm of Ciudad
Rodngo, siegt', storm, and escalade of the Castle of Bidajoz in March and April 1812, battle
of Salamanca, capture of Madrid and the Retire, affairs on the retreat fiom Madrid to
Salamanca and Portugal in Nov. 1812, subsequent advance and passage of the Ebro, battle
of Vittoria, blockade of Pampeluna, the battles in the Pyrenees on the 27th, 28th, and 30lh
July, battles of the Nivelle, the Nive, and Orlhes, actions of Vic Bigorre and Tarbes, and
battle of Toulouie. He has the War Medal with eleven Clasps for Busaco, Fueutes d'Onor,
Ciudad Rodrigo, Badajoz, Salamanca, Vittoria, Pyrenees, Nivelle, Nive, Ortbca, and Toulouse.
74 Major General Alex. IL Eraser was employed in the expedition against Sambas in the
Island of Borneo.
75 Major General W. H. Elliott embarked with the 51st Regt. for Lisbon, 26th Jan. 1811,
and was present at the battle of Fuentes d'Onor, covering the siege of Ciudad Rodrigei, second
siege of Bidajoz, affair near Val Moresco, battle of Salamanca, capture of Madrid and the
Retiro, covering; the siege of Burgos, retreat into Portugal, during which operation he served as
Aide de Camp to Colonel Mitchell, commanding Ist Brigade, 7th Division, and received a con¬
tusion on the shoulder from a musket ball when conveying orders to an officer who was skir¬
mishing in advance. In June 1813, he was appointed Act ng Aide de Camp to Major General
Inglis, and was present at the battles of the Pyrenees, 30th and 31st July—received a flesh
wound from a musket ball, and had a horse killed; action at Lesaca, battle of Nivelle, attack
of the heights of St. Pe, and battle of Orthes. Appointed Major of Brigade to the 1st Brigade,
7th Division, served as such until the end of that war, and has the War Medal and five Clasps.
Served also the campaign of 1815, including the battle of Waterloo, storming of Cambray,
where he had charge of the scaling ladders, and capitulation of Paris. Served in command of
the Madras Brigade throughout the Burmese war of 1852-53; was on board the steam frigate
Ferooz during the Naval action and destruction of the enemy's stockades on the Rangoon
River, and was second in command during the succeeding three days' operations and assault
of the Grf at Shoe Dragon Pagoda, and wiis present at the night attack of the Burmese at
Prome (Medal and Clasp, and was twice thanked by the Governor General). On 20th Nov.
1853, he put down a plot and general rising of a large body of natives and others from Ava,
having for its object the sudden seizure of the Great Rangoon Pagoda, the station, and the
city, and the murdering of all the British subjects therein.
76 Major General Hawkins commanded the Royal Marines, about 200 strong, at the
attack and destruction of Malloodoo, in Borneo.
77 Major General James Clarke served in the attack on the Russian gun-boats and bat¬
teries on Percola Point in 1809. At the capture of Guadaloupe in 1810, and at the battle of
Algiers. War Medal with two Clasps.
78 Major General Eyre's services:—Expedition to Portugal and occupation of Lisbon in
1808; auvauce upon Madrid and retreat to Corunna in 1808-9; affair at Lugo and battle of
Corunna, for which he has received the Silver War Medil with one Clasp. Eighteen years con¬
tinued service in the West Ind'es, from Oct. 1810 to April 1828; and in command of the Royal
Artillery in China, at H( ng Kong, from August 1847 to May 1851.
79 Major General Childs served in H. M. S. Gibraltar, blockading Cherbourg, L'Orient,
and Basque Roads, and frequently in boats cutting out French coasters. Early in 1813 he
volunteered to serve in the Ist Battalion under Colonel Sir Richard Williams in the Chesapeake,
and was at the att-ick of Craney Island, taking of the enemy's camp sit Hampt( n, and capture
of Kent Island, and in many minor engagements on the enemy's coast; after which he accom-