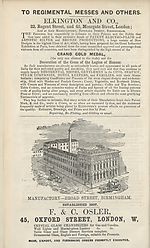 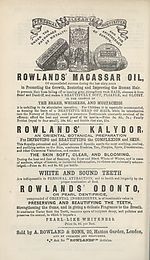 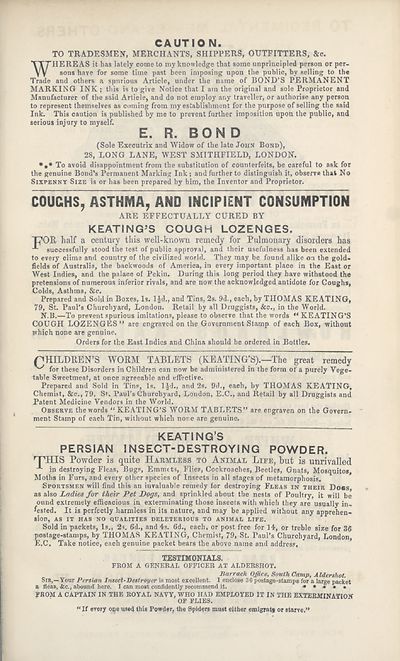 CAUTION.
TO TRADESMEN, MERCHANTS, SHIPPERS, OUTFITTERS, &c.
WHEREAS it has lately come to my knowledge that some unprincipled person or per¬
sons have for some time past been imposing upon the public, by selling to the
Trade and others a spurious Article, under the name of BOND'S PERMANENT
MARKING INK ; this is to give Notice that I am the original and sole Proprietor and
Manufacturer of the said Article, and do not employ ar.y traveller, or authorise any person
to represent themselves as cnniing from my establishment for the purpose of selling the said
Ink. This caution is publislied by me to prevent further imposition upon the public, and
serious injury to myself.
E. R. BOND
(Sole Executrix and Widow of the late JoiiM Bond),
28, LONG LANE, WEST SMITHFIELD, LONDON.
•»• To avoid disappointment from the substitution of counterfeits, be careful to ask for
the genuine Bond's Permanent Marking Ink ; and further to distinguish if, observe thai No
Sixpenny Size is or has been prepared by him, the Inventor and Proprietor.
COUGHS, ASTHMA, AND INCIPIENT CONSUMPTION
ARE EFFECTUALLY CURED BY
KEATING^S COUGH LpZENGES.
"POR half a century this well-kuowu remedy for Pulmonary disorders has
successfully stood the test of public approval, and their usefulness has been extended
to every clime and country of the civilized world. They may be found alike o'.i the gold-
fields of Australia, the backwoods of America, in every important place in the East or
West Indies, and the palace of Pekin. During this long period they have withstood the
pretensions of numerous inferior rivals, and are now the acknowledged antidote for Coughs,
Colds, Asthma, &c.
Prepared and Sold in Boxes, Is. IJd., and Tins, 2s. 9d., each, by THOMAS KEATING,
79, St. Paul's Churchyard, London. Retail by all Druggists, &c., in the World.
N.Ii.—To prevent spurious imitations, please to observe that the words " KEATING'S
COUGH LOZENGES" are engraved on tlie Government Stamp of each Box, without
which none are genuine.
Orders for the East Indies and China should be ordered in Bottles.
pHILDllEN'S WORM TABLETS (KEATING'S).—The great remedy
for these Disorders in Children can now be administered in the form of a purely Vege¬
table Sweetmeat, at once agreeable and effective.
Prepared and Sold in Tins, Is. 1 J-d., and 2s. 9d., each, by THOMAS KEATING,
Chemist, &e., 79, Si. Paul's Churchyard, London, E.G., and Retail by all Druggists and
Patent Medicine Vendors in the World.
Observe the words " KEATING'S WORM TABLETS" are engraven on the Govern¬
ment Stamp of each Tin, without which nore are genuine.
KEATING'S
PERSIAN INSECT-DESTROYING POWDER.
'T'HIS Powder is quite Haumless to Animal Life, but is unrivalled
in destroying Fleas, Bugs, Emmets, Flies, Cockroaches, Beetles, Gnats, Mosquitos,
Moths in Furs, and every other species of Insects in all stages of metamorphosis.
Sportsmen will find this an invaluable remedy for destroying Fleas in their Does
as ?i]so ILndies for their Pet Dogs, and sprinkled about the nests of Poultry, it will be
ouiid extremely efficacious in exterminating those insects with which they are usually in-
'ested. It is perfectly harmless in its nature, and may be applied without any apprehen¬
sion, AS IT HAS NO QUALITIES DELETERIOUS TO ANIMAL LIFE.
Sold in packets, Is., 2<. 6d., and 4?. Gd., each, or post free for 14, or treble size for 36
postage-stamps, by THOMAS KEATING, Chemist, 79, St. Paul's Churchyard, London,
?].C. Take notice, each genuine packet bears the above name and address,
TESTIMONIALS.
FROM A GENERAL OFFICER AT ALDERSHOT.
Barrack OJ/ice, South Camp, Alderthot.
Sir,—Your Persian Tngect-Vestroycr is most excellent. I enclose 30 poBtage-stamps for a large packet
a fleas, itc, abound here. I can most confidently recommend it. * • • • •
FROM A CAPTAIN IN THE ROYAL NAVY, WHO H.\D EMPLOYED IT IN THE EXTERMINATIOK
OP FLIES.
" If every one used this Powder, the Spiders must either emigratt or starve."