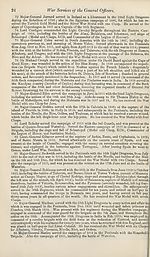 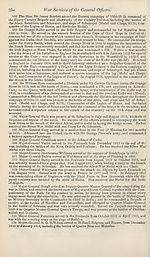 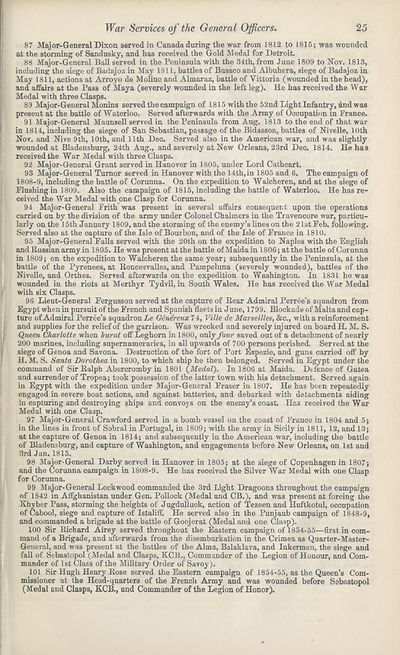 War Services of the General Officers. 25
87 Major-General Dixon served in Canada during the war from 1812 to 1815; was wounded
at the storming of Sandusky, and has received the Gold Medal for Detroit.
88 Major-General Ball served in the Peninsula with the 34th, from Juno 1809 to Nov. 1813,
including the siege of Badajoz in May 1811, battles of Busaco and Albuhera, siege of Badajoz in
May 1811, actions at Arroyo de Molinc and Almaraz, battle of Vittoria (wounded in the head),
and affairs at the Pass of Maya (severely wounded in the left leg). He has received the War
vledal with three Clasps.
89 Major-General Monins served the campaign of 1815 with the 52nd Light Infantry, and was
present at the battle of Waterloo. Served afterwards with the Army of Occupation in France.
91 Major-General Mauusell served in the Peninsula from Aug. 1813 to the end of that war
in 1814, including the siege of San Sebastian, passage of the Bidassoa, battles of Nivelle, 10th
Nov. and Nive 9th, 10th, and 11th Dec. Served also in the American war, and was slightly
wounded at Bladensburg, 24th Aug., and severely at New Orleans, 23rd Dec. 1814. He has
received the War Medal with three Clasps.
92 Major-Qeneral Grant served in Hanover in 1805, under Lord Cathcart.
93 Major-General Turner served in Hanover with the 14th,in 1805 and 6. The campaign of
1808-9, including the battle of Corunna. On the expedition to Walcheren, and at the siege of
Flushing in 1809. Also the campaign of 1815, including the battle of Waterloo. He has re¬
ceived the War Medal with one Clasp for Corunna.
94 Major-General Frith was present in several affairs consequent upon the operations
carried on by the division of the army under Colonel Chalmers in the Travencore war, particu¬
larly on the 15th January 1809, and the storming of the enemy's lines on the 21st Feb. following.
Served also at the capture of the Isle of Bourbon, and of the Isle of France in 1810.
95 Major-General Falls served with the 20th on the expedition to Naples with the English
and Russian army in 1805. He was present at the battle of Maida in 1806; at the battle of Corunna
in 1809; on the expedition to Walcheren the same year; subsequently in the Peninsula, at the
battle of the Pyrenees, at Roncesvalles, and Pampeluna (severely wounded), battles of the
Nivelle, and Orthes. Served afterwards on the expedition to Washington. In 1831 he was
wounded in the riots at Merthyr Tydvil, in South Wales. He has received the War Medal
with six Clasps.
90 Lieut-General Fergusson served at the capture of Rear Admiral Perrte's squadron from
Egypt when in pursuit of the French and Spanish tieetsin June, 1799. Blockade of Malta and cap¬
ture of Admiral Perree's squadron Xe GenereuxH, Ville de Mamciltes, &c., with a reinforcement
and supplies for the relief of the garrison. Was wrecked and severely injured on board H. M. S.
Queen Charlotte when burnt off Leghorn in 1800, only/oar saved out of a detachment of nearly
200 marines, including supernumeraries, in all upwards of 700 persons perished. Served at the
siege of Genoa and Savona. Destruction of the fort of Port Espezie, and guns carried off by
H. M. S. Santa Dorothea in 1800, to which ship he then belonged. Served in Egypt under the
command of Sir Ralph Abercromby in 1801 {Medal). In 1800 at Maida. Dtfence of Gatea
and surrenderor Tropea; took possession of the latter town with his detachment. Served again
in Egypt with the expedition under Major-General Eraser in 1807. He has been repeatedly
engaged in severe boat actions, and against batteries, and debarked with detachments aiding
in capturing and destroying ships and convoys on the enemy's coast Has received the War
Medal with one Clasp.
97 Major-General Crawford served in a bomb vessel on the coast of France in 1804 and 5;
in the lines in front of Sobral in Portugal, in 1809; with the army in Sicily in 1811, 12, and 13;
at the capture of Genoa in 1814; and subsequently in the American war, including the battle
of Bladensburg, and capture of Washington, and engagements before New Orleans, on 1st and
3rd Jan. 1815.
98 Major-General Darby served in Hanover in 1805; at the siege of Copenhagen in 1807;
and the Corunna campaign in 1808-9. He has received the Silver War Medal with one Clasp
for Corunna.
99 Major-General Lockwood commanded the 3rd Light Dragoons throughout the campaign
of 1842 in Aifghanistan under Gen. Pollock (Medal and CB.), and was present at forcing the
Khyber Pass, storming the heights of JugduUuck, action of Tezeen and Huftkotul, occupation
of Cabool, siege and capture of Istaliff. He served also in the Punjaub campaign of 1848-9,
and commanded a brigade at the battle of Goojerat (Medal and one Clasp).
100 Sir Richard Airey served throughout the Eastern campaign of 1854-55—first in com¬
mand of a Brigade, and afterwards from the disembarkation in the Crimea as Quarter-Master-
Gencral, and was present at the battles of the Alma, Balaklava, and Inkerman, the siege and
fall of Sebastopol (Medal and Clasps, KCB., Commander of the Legion of Honour, and Com¬
mander of Ist Class of the Military Order of Savoy).
101 Sir Hugh Henry Rose served the Eastern campaign of 1854-55, as the Queen's Com¬
missioner at the Head-quarters of the French Army and was wounded before Sebastopol
(Medal and Clasps, KCB., and Commander of the Legion of Honor).