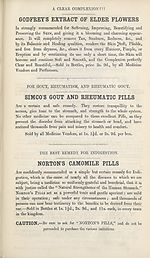 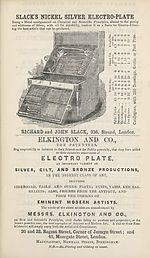 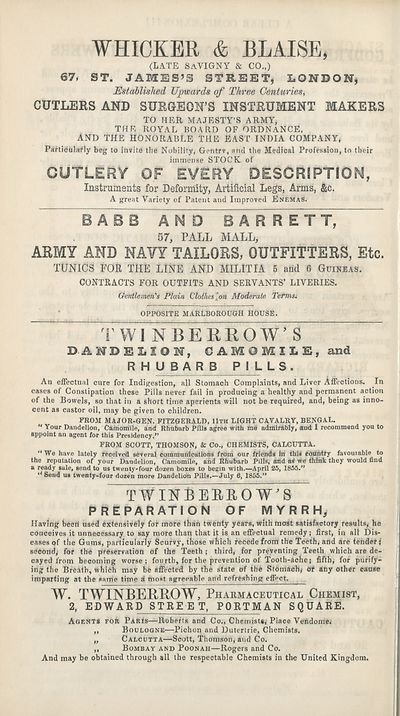 WHICKER & BLAISE,
(LATE SaVIGNY & CO.,)
67, ST. JAMES'S STREET, LONDONj
JEstahlislied Upwards of Three Centuries,
CUTLERS AND SURGEON'S INSTRUMENT MAKERS
TO HKR MAJESTY'S ARMY,
THF, ROYAL BOARD OF ORDNANCE,
AND THE HONORABLE THE EAST INDIA COMPANY,
Particulatly beg to invite the Nubility, Gentrv, and the Medical Profession, to their
inuneiise STOCK of
CUTLERY OF EVERY DESCRIPTIO^J,
Instruments for Deformity, Artificial Legs, Arms, &c.
A ifreat Variety of Patent and Improved Enemas.
B ABB AND BARRETT,
57, PALL MALL,
ARMY AND NA¥Y TAILORS, OUTFITTERS, Etc.
TUNICS FOR THE LINE AND MILITIA 5 and 6 Guineas.
CONTRACTS FOR OUTFITS AND SERVANTS' LIVERIES.
Gentlemen's Plain Cloihcs 'on Moderate Terms.
OPPOSITE MARLBOROUGH HOUSE.
! WI NBERROW'S
DANDELION, CAMOMILE, and
R H U B A R B P I L L S .
An effectual cure for Indi<restion, all Stomach Complaints, and Liver Affections. In
cases of Constipation these Pills never fail in producing a healthy and permanent action
of the Bowels, so that in a short time aperients will not be required, and, being as inno¬
cent as castor oil, may be given to children.
FROM MAJOR-GEN. FITZGERALD, 11th LIGHT CAVALRY, BENGAL.
" Your Dandelion, Camomile, and Rhubarb Pills agree with me admirably, and I recommend you to
appoint an agent /or this Presidency."
FROM SCOTT, THOMSON, & Co., CHEMISTS, CALCUTTA.
" We have lately received several communications from our friends in this totfntry favouiable to
the reputation of your Dandelion, Camomile, and Rhubarb Pills, and ai we think they would find
a ready sale, send to us twenty-four dozen boxes to beam with.—April 25, 1855."
" Send us twenty-four dozen more Dandelion Pills.—July 6, 1855."
TWINBERROW^S
PREPARATION OF MYRRH,
Having been used extensively for more than twenty years, with most satisfactory results, he
conceives it unnecessary to say more than that it is an effectual remedy; first, in all Dis¬
eases of the Gums, particularly Scurvy, those which recede from the Teeth, and are tender;
second, for the preservation of the Teeth; third, for preventing Teeth which are de¬
cayed from becoming worse; fourth, for the prevention of Tooth-achej fifth, for purify¬
ing the Breath, which may be affected by the state of the Stomach, of any other cause
imparting at the same time i most agreeable and refreshing effect.
W. TWTOBERRX)W, Pharmaceutical Chemist,
2, EDWARD STREET, PORTMAN SQUARE.
Agents for Paris—Roberts and Co., Chetnists, Place Vendome.
,, Boulogne—Pichon and Duteririe, Chemists.
„ Calcutta—Scott, Thomson, and Co.
„ Bombay and Poonah—Rogers and Co.
And may be obtained through »11 the respectable Chemists in tlve United Kingdom.