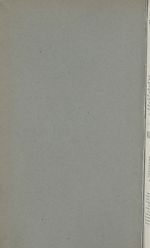 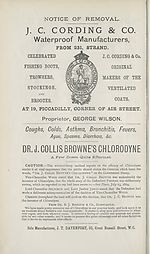 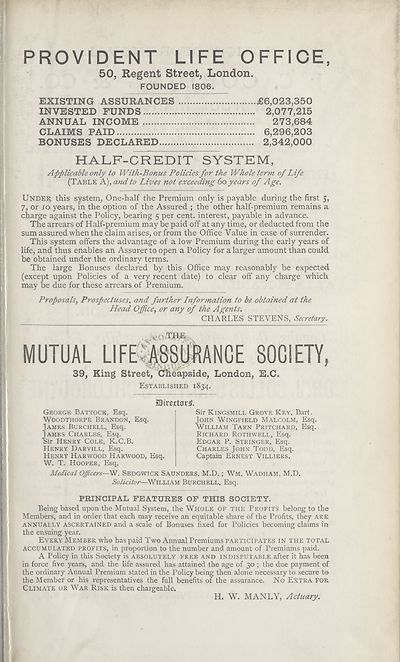 PROVIDENT LIFE OFFICE,
50, Regent Street, London.
FOUNDED 1806.
EXISTING ASSURANCES £6,023,350
INVESTED FUNDS 2,077,215
ANNUAL INCOME 273,684
CLAIMS PAID 6,296,203
BONUSES DECLARED 2,342,000
HALF-CREDIT SYSTEM,
Applicable only to With-Bonus Policies for the Whole term of Life
(Table A), and to Lives not exceeding do years of Age.
Under this system. One-half the Premium only is payable during the first 5,
7, or ID years, in the option of the Assured ; the other half-premium remains a
charge against the Policy, bearing 5 per cent, interest, payable in advance.
The arrears of Half-premium may be paid off at any time, or deducted from the
sum assured when the claim arises, or from the Office Value in case of surrender.
This system offers the advantage of a low Premium during the early years of
life, and thus enables an Assurer to open a Policy for a larger amount than could
be obtained under the ordinary terms.
The large Bonuses declared by this Office may reasonably be expected
(except upon Policies of a very recent date) to clear off any charge which
may be due for these arrears of Premium.
Proposals^ Prospectuses, and further Lnformation to be obtained at the
Head Office, or any of the Agents.
CHARLES STEVENS, Secretary.
v<vTHE
MUTUAL L1FE:A88URANCE SOCIETY,
39, King Street, Clieapside, London, E.C.
Established 1S34.
George Battock, Esq.
WooDTHORPE Brandon, Esq.
James Burchell, Esq.
James Charles, Esq.
Sir Henry Cole, K.C.B.
Henry Darvill, Esq.
Henry Harwood Harwood, Esq.
W. T. Hooper, Esq.
Medical Officers—W. Sedgwick Saundees, M.D. ; Wm. Wadham, M.D.
Solicitor—William Burchell, Esq.
Sir KiNGSMiLL Grove Key, Bart.
John Wingfield Malcolm, Esq.
William Tarn Pritchard, Esq.
Richard Rothvvell, Esq.
Edgar P. Stringer, Esq.
Charles John Todd, Esq.
Captain Ernest Villiers.
PRINCIPAL FEATURES OF THIS SOCIETY.
Being based upon the Mutual System, the Whole of the Profits belong to the
Members, and in order that each may receive an equitable share of the Profits, they are
annually ascertained and a scale of Bonuses fixed for Policies becoming claims in
the ensuing year.
Every Member who has paid Two Annual Premiums participates in the total
accumulated profits, in proportion to the number and amount of Premiums paid.
A Policy in this Society is absolutely free and indisputable after it has been
in force five years, and the life assured has attained the age of 30 ; the due payment of
the ordinary Annual Premium stated in the Policy being then alone necessary to secure to
the Member or his representatives the full benefits of the assurance. No Extra for
Climate or War Risk is then chargeable.
H. W. MANLY, Actuary.