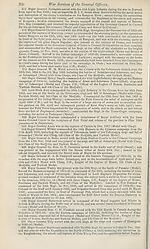 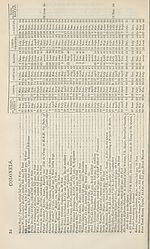 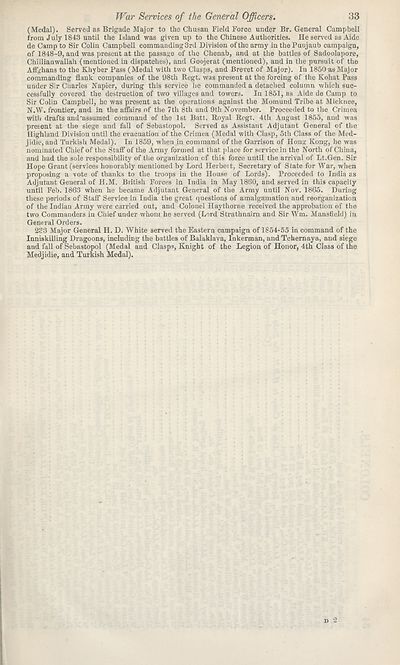 TVar Services of the General Officers. 33
(Medal). Served as Brigade Major to the Chusan Field Force under Br. General Campbell
from July 1843 until the Island was given up to the Chinese Authorities. He served as Aide
de Camp to Sir Colin Campbell commanding 3rd Division of the army in the Puujaub campaign,
of 1848-9, and was present at the passage of the Chonab, and at the battles of Sadoolapore,
Chillianvvallah (mentioned in dispatches), and Goojerat (mentioned), and in the pursuit of the
Aif^'hans to the Khyber Pass (Medal with two Clasps, and Brevet of Major). In 1850 as Major
commanding flank companies of the 08th Regt. was present at the forcing of the Kohat Pass
under Sir Charles JVapier, during this service he commanded a detaclied column which suc¬
cessfully covered the destruction of two villages and towers. In 1851, as Aide de Camp to
Sir Colin Campbell, he was present at the operations against the Momund Tribe at Micknee,
N.W. frontier, and in the affairs of the 7th 8th and 9th November. Proceeded to the Crimea
witli drafts and'assumed command of the 1st Batt. Royal Regt. 4th August 1855, and was
present at the siege and fall of Sebastopol. Served as Assistant Adjutant General of the
Highland Division until the evacuation of tlie Crimea (Medal with Clasp, 5th Class of the Med-
jidie, and Turkish Medal). In 1859, when in command of the Garrison of Hong Kong, he was
nominated Chief of the Staff of the Army foi'nied at tliat place for service in the North of China,
and had the sole responsibility of tlie organization of this force until the arrival of Lt.Gen. Sir
Hope Grant (services honorably mentioned by Lord Herbert, Secretary of State for War, when
proposing a vote of thanks to the troops in the House of Lords). Proceeded to India as
Adjutant General of H.M. British Forces in India in May 1800, and served in this capacity
until Feb. 1863 when he became Adjutant General of the Army until Nov. 1805. During
these periods of Staff Service in India the great questions of amalgamation and reorganization
of the Indian Army were carried out, and Colonel Haythorne received the approbation of the
two Commanders in Chief under whom he served (Lord Strathnairn and Sir Wm. Mansfield) in
General Orders.
223 Major General H. D. White served the Eastern campaign of 1854-55 in command of the
Inniskilling Dragoons, including the battles of Balaklava, Inkerman, and Tchernaya, and siege
and fall of Sebastopol (Medal and Clasps, Knight of the Legion of Honor, 4th Class of the
Medjidie, and Turkish Medal).
D 2