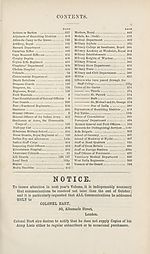 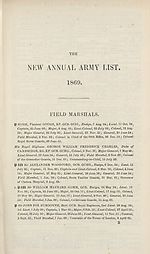 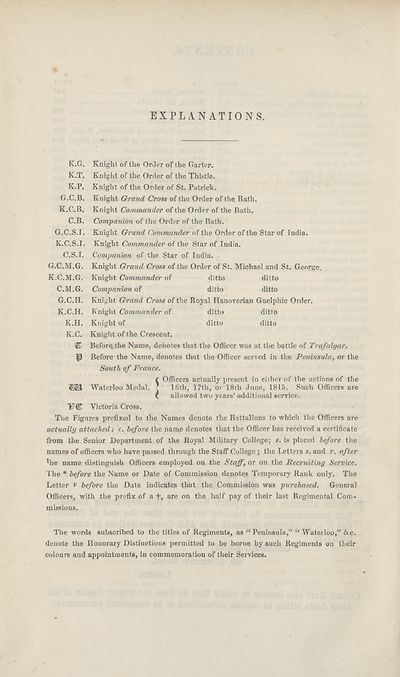 EXPLANATIONS.
K.G. Knight of the OrJer of the Garter.
K.T. Knight of the Order of the Thistle.
K.P. Knight of the Order of St. Patrick.
G.C.B. Knight Grand Cross of the Order of the Bath.
K.C.B. Knight Commander of the Order of the Bath.
C.B. Companion of the Order of the Bath.
G.C.S.r. Knight Grand Commander of the Order of the Star of India.
K.C.S.I. Knight Commander of the Star of India.
C.S.I. Companion of the Star of India.
G.C.M.G. Knight Grand Cross of the Order of St. Michael and St. George.
K.C.M.G. Knight Commaiider of ditto ditto
C.M.G. Companion of ditto ditto
G.C.H. Kniijht Grand Cross of the Royal Hanoverian Guelphic Order.
K.C.H. Knight Commander of ditto ditto
K.H. Knight of ditto ditto
K.C. Kniglit of the Crescent.
m Before the Name, deiiotes that the Officer was at tlio battle of Trafalgar.
P Before the Name, denotes that the Officer served in the Peninsula, or the
South of France.
t Officers actually present in either of the actions of the
ffiSa Waterloo Medal. | Kith, 17th, or 18th June, 1815. Such Officers are
( allowed two years' additional service.
VQl Victoria Cross.
Tlie Figures prefixed to the Names denote the Biittalions to which the Officers are
actually attached; c. before the name denotes that the Officer has received a certificate
from the Senior Department of the Royal Military College; s. is placed before the
names of officers who have passed through the Staff College ; the Letters s. and r. after
'-he name distinguish Officers employed on tlie Staff, or on the Recruiting Service.
The • before the Name or Date of Commission denotes Temporary Rank only. The
Letter p before the Date indicates that the Commission was purchased. General
Officers, with tlie prefix of a+, are on the half pay of their last Regimental Com¬
missions.
The words subscribed to the titles of Regiments, as " Peninsula," " Waterloo," &c.
denote the Honorary Distinctions permitted to be borne by such Regiments on their
colours and appointments, in commemoration of their Services.