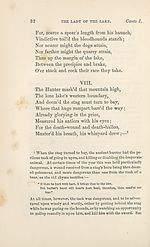 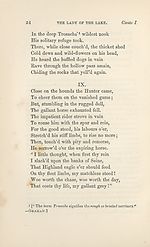 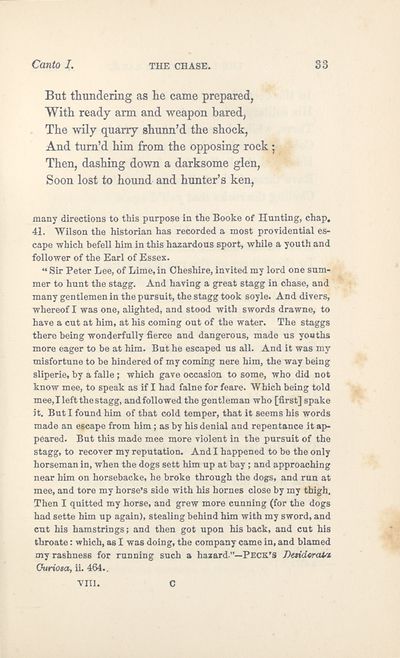 Canto I.
THE CHASE.
33
But thundering as he came prepared,
With ready arm and weapon hared,
The wily quarry shunn’d the shock,
And turn’d him from the opposing rock;
Then, dashing down a darksome glen,
Soon lost to hound and hunter’s ken,
many directions to this purpose in the Booke of Hunting, chap.
41. Wilson the historian has recorded a most providential es¬
cape which befell him in this hazardous sport, while a youth and
follower of the Earl of Essex.
“ Sir Peter Lee, of Lime, in Cheshire, invited my lord one sum¬
mer to hunt the stagg. And having a great stagg in chase, and
many gentlemen in the pursuit, the stagg took soyle. And divers,
whereof I was one, alighted, and stood with swords drawne, to
have a cut at him, at his coming out of the water. The staggs
there being wonderfully fierce and dangerous, made us youths
more eager to be at him. But he escaped us all. And it was my
misfortune to be hindered of my coming nere him, the way being
sliperie, by a falle ; which gave occasion to some, who did not
know mee, to speak as if I had falne for feare. Which being told
mee,I left the stagg, andfollowed the gentleman who [first] spake
it. But I found him of that cold temper, that it seems his words
made an escape from him ; as by his denial and repentance it ap¬
peared. But this made mee more violent in the pursuit of the
stagg, to recover my reputation. And I happened to be the only
horseman in, when the dogs sett him up at bay ; and approaching
near him on horsebacke, he broke through the dogs, and run at
mee, and tore my horse’s side with his homes close by my thigh.
Then I quitted my horse, and grew more cunning (for the dogs
had sette him up again), stealing behind him with my sword, and
cut his hamstrings; and then got upon his back, and cut his
throate: which, as I was doing, the company came in, and blamed
my rashness for running such a hazard "—Peck’s T)end»rat't
Ouriota, ii. 464..
•VIII.
C