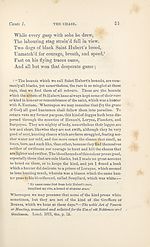 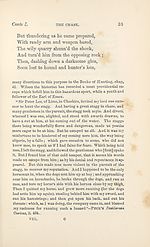 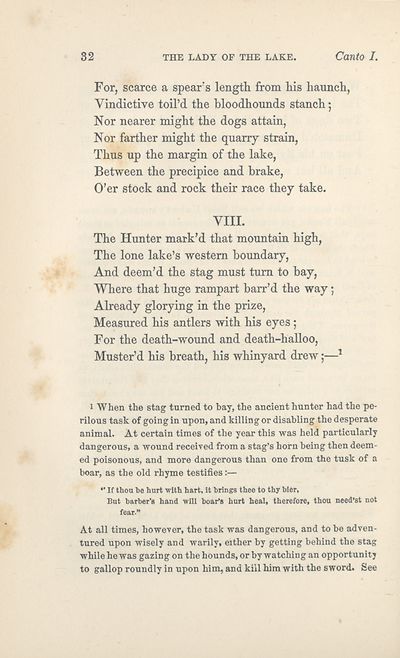 32
THE LADY OF THE LAKE.
Canto I.
For, scarce a spear's length from his haunch,
Yindictive toil’d the bloodhounds stanch 5
Nor nearer might the dogs attain,
Nor farther might the quarry strain,
Thus up the margin of the lake,
Between the precipice and brake,
O’er stock and rock their race they take.
VIII.
The Hunter mark’d that mountain high,
The lone lake’s western boundary,
And deem’d the stag must turn to bay,
Where that huge rampart hair’d the way;
Already glorying in the prize,
Measured his antlers with his eyes;
For the death-wound and death-halloo,
Muster’d his breath, his whinyard drew;—1
1 When the stag turned to bay, the ancient hunter had the pe¬
rilous task of going in upon, and killing or disabling the desperate
animal. At certain times of the year this was held particularly
dangerous, a wound received from a stag's horn being then deem¬
ed poisonous, and more dangerous than one from the tusk of a
boar, as the old rhyme testifies:—
•' If thou be hurt with hart, it brings thee to thy bier.
But barber's hand will boar's hurt heal, therefore, thou need’st not
fear.”
At all times, however, the task was dangerous, and to be adven¬
tured upon wisely and warily, either by getting behind the stag
while he was gazing on the hounds, or by watching an opportunity
to gallop roundly in upon him, and kill him with the sword. See