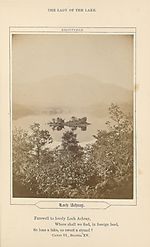 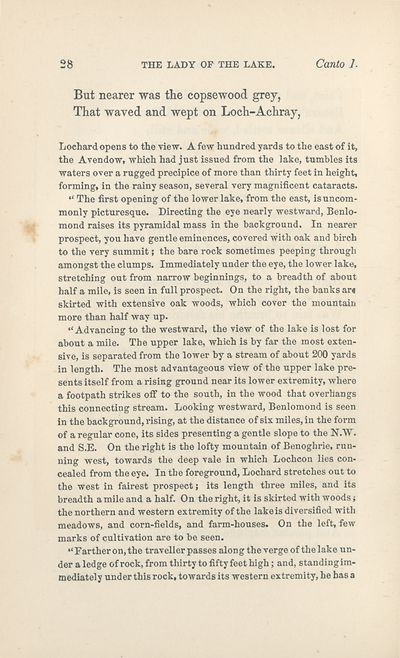 28
THE LADY OF THE LAKE.
Canto ]■
But nearer was the copsewood grey,
That waved and wept on Loch-Achray,
Lochard opens to the view. A few hundred yards to the east of it,
the Avendow, which had just issued from the lake, tumbles its
waters over a rugged precipice of more than thirty feet in height,
forming, in the rainy season, several very magnificent cataracts.
“ The first opening of the lower lake, from the east, is uncom¬
monly picturesque. Directing the eye nearly westward, Benlo-
mond raises its pyramidal mass in the background. In nearer
prospect, you have gentle eminences, covered with oak and birch
to the very summit; the bare rock sometimes peeping through
amongst the clumps. Immediately under the eye, the lower lake,
stretching out from narrow beginnings, to a breadth of about
half a mile, is seen in full prospect. On the right, the banks art
skirted with extensive oak woods, which cover the mountain
more than half way up.
“Advancing to the westward, the view of the lake is lost for
about a mile. The upper lake, which is by far the most exten¬
sive, is separated from the lower by a stream of about 200 yards
in length. The most advantageous view of the upper lake pre¬
sents itself from a rising ground near its lower extremity, where
a footpath strikes off to the south, in the wood that overhangs
this connecting stream. Looking westward, Benlomond is seen
in the background, rising, at the distance of six miles, in the form
of a regular cone, its sides presenting a gentle slope to the N.W.
and S.E. On the right is the lofty mountain of Benoghrie, run¬
ning west, towards the deep vale in which Lochcon lies con¬
cealed from the eye. In the foreground, Lochard stretches out to
the west in fairest prospect; its length three miles, and its
breadth a mile and a half. On the right, it is skirted with woods;
the northern and western extremity of the lakeis diversified with
meadows, and corn-fields, and farm-houses. On the left, few
marks of cultivation are to be seen.
“Farther on, the traveller passes along the verge of the lake un-
deraledge of rock, from thirty to fifty feet high; and, standingim-
mediately underthis rock, towards its western extremity, he has a