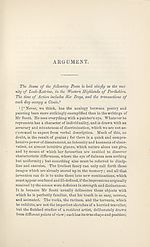 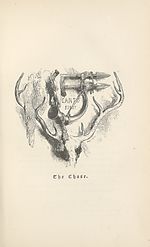 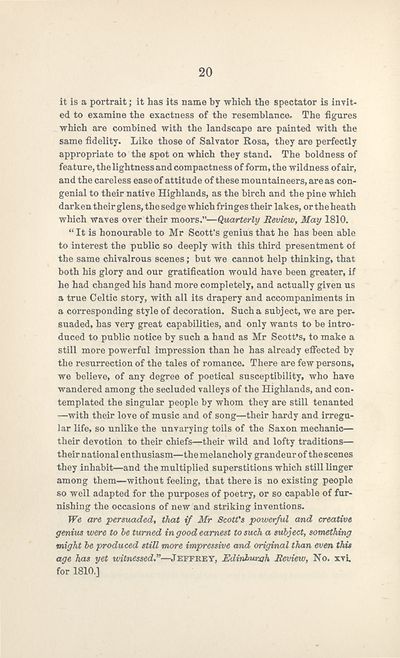 20
it is a portrait; it has its name by which the spectator is invit¬
ed to examine the exactness of the resemblance- The figures
which are combined with the landscape are painted with the
same fidelity. Like those of Salvator Rosa, they are perfectly
appropriate to the spot on which they stand. The boldness of
feature, the lightness and compactness of form, the wildness of air,
and the careless ease of attitude of these mountaineers, are as con¬
genial to their native Highlands, as the birch and the pine which
darken their glens, the sedge which fringes their lakes, or the heath
which waves over their moors.”—Quarterly Review, May 1810.
“It is honourable to Mr Scott's genius that he has been able
to interest the public so deeply with this third presentment of
the same chivalrous scenes; but we cannot help thinking, that
both his glory and our gratification would have been greater, if
he had changed his hand more completely, and actually given us
a true Celtic story, with all its drapery and accompaniments in
a corresponding style of decoration. Such a subject, we are per¬
suaded, has very great capabilities, and only wants to be intro¬
duced to public notice by such a band as Mr Scott’s, to make a
still more powerful impression than he has already efifected by
the resurrection of the tales of romance. There are few persons,
we believe, of any degree of poetical susceptibility, who have
wandered among the secluded valleys of the Highlands, and con¬
templated the singular people by whom they are still tenanted
—with their love of music and of song—their hardy and irregu¬
lar life, so unlike the unvarying toils of the Saxon mechanic—
their devotion to their chiefs—their wild and lofty traditions—
their national enthusiasm—themelancholy grandeur of the scenes
they inhabit—and the multiplied superstitions which still linger
among them—without feeling, that there is no existing people
so well adapted for the purposes of poetry, or so capable of fur¬
nishing the occasions of new and striking inventions.
We are •persuaded, that if Mr Scott's powerful and creative
genius were to he turned in good earnest to such a subject, something
might he produced still more impressive and original than even this
age has yet witnessed.”—Jeffrey, Edinhurgh Review, No. xvi.
for 1810.]